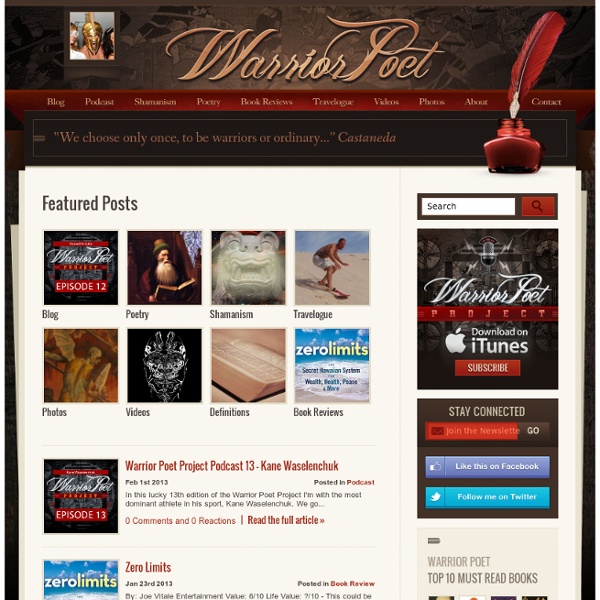 Life Outside The Box | Tynan Quantum Shaman Glossary The Quantum Shaman™GLOSSARY OF TERMS ABYSS - 1) The emptiness or the nothing, the absence of all things. Most people have never seen the abyss, while others think of it (erroneously) as the religious vision of "hell”. If consciousness is existence, the abyss is oblivion. 2) The hollow emptiness inside someone who has made no attempt at their own personal evolution. The soulless void. In this definition, the abyss is the pit of despair into which people fall when they experience what is traditionally called a "loss of faith". ALLY or ALLIES - entities who may act on behalf of a seeker. ASSEMBLAGE POINT (or AP) – The assemblage point is, first and foremost, the viewpoint through which we see our world. BELIEF SYSTEM - Any school of thought which requires belief or faith as opposed to personal experience. BLACK IRON PRISON – the overlay; the matrix; the continuum of ordinary awareness in which mortals exist until they awaken. BRUJO or BRUJA - a sorcerer. CHANNELING - see Gnosis.

The Hustler's MBA I've been saying that college is obsolete for a very long time. I dropped out in 2000, because even back then I could see that it was a really poor value proposition. I didn't predict this because I'm some crazy genius, but because I'm willing to discard emotional attachment and stare plainly at the facts. School is outrageously expensive, leaving graduates with a debt (or net expenditure) of tens of thousands of dollars-- sometimes even one or two hundred thousand. There are some things that are worth that amount of money, but for many people school isn't one of them. In fact, apart from very specific cases, I think that school is a bad thing, not worth doing even if it was free. That's not to say that school has no benefits whatsoever. Let's say that when you turn eighteen, it's a good idea to take four years to develop yourself. 1. Poker will cost you money at first. Besides being able to make $85k/year, you could also play for six months and make $40k a year. 2. 3. 4. 5. 6. 7. 8. 9.

Shaman Links - Information on Shamanism, Links to Shamanic Teachers and Shaman Healers By State The Public Domain Review | Daniele Bolelli - Home documentary A documentary about the root causes of the systemic value disorders and detrimental symptoms caused by our current established system. The film details the need to outgrow the dated and inefficient methods of politics, law, business, or any other "establishment" notions of human affairs, and use the methods of science, combined with high technology, to provide for the needs of all the world's people. “If we are genuinely concerned about the environment and the fellow human beings, and want to end territorial disputes, war, crime, poverty, hunger, and the other problems that confront us today, the intelligent use of science and technology are the tools with which to achieve a new direction; one that will serve all people, and not just a select few.” — Jacque Fresco Paradise or Oblivion, by...

What is a Shamanic Journey What is a Shamanic Journey By Viola Woolcott The Shaman is said to be walking with one foot in the every day world and with the other in the spirit world. Different cultures may express their views on the two realities in differently, but the basic idea is the same. Shamans are explorers of doorways from ordinary reality into non-ordinary (NOR) reality through portals leading him from the physical to the spirit world. They are moving between those two worlds. The Shamanic Journey is a way of finding answers, information, healing, wisdom and knowledge as well as guidance or help with one’s personal life. A shamanic world is made up of three parts, the lower world, the upper world and the middle world. Each shaman begins there journey with a theme, if they are looking for guidance on a specific issue, their theme would be whatever the issue is. Shamans do rely on their instincts as well as their powers.

50+Ways - home Sound, Synchronicities & Shamanism "He made the whole world an instrument of sound, and an instrument for carrying messages, resounding praise to the Creator of all. - Frank Waters - The Book of the Hopi Sound There is something called the Sacred Sound Current which correlates to the spiritual Hindu "OM" and the Sufi "HU", and the Sant Mat "Shabd". This Music of the Spheres, Logos or Word as called in mystical teachings, goes beyond our limited spoken language. Such ethereal music is referred to also as the Sound of God or the Breath of God since the sound permeates all things. And as we know, all things are composed of energy. This all pervading sound in the current of the Ocean of Consciousness is believed to be the connecting link between God and man. As physics deems, all is in a vibrational state, and thus can be converted into mathematical renditions, musical notes and color frequencies. Light and Sound is also viewed as synonymous with each other in the ancient scriptures. Synchronicity Shamanism Related Articles :

Edge.org WE DO NOT HAVE SHAMANS: The Case Against "Shamans" In North American Indigenous Cultures WE DO NOT HAVE SHAMANSBy Joseph RiverWind (Boriken Taino) Thanks to the New Age craze that has spread around the world, there are many self-proclaimed "medicine men" and "shamans"—people who claim to follow our spiritual ways, having "learned" everything they know from books bought at the local book store. After the book Black Elk Speaks was published, people thought they could become instant medicine men and women. Little do they know that Black Elk did not tell the whole truth to the book's writer. Some people go so far as to charge for vision quests or sweat lodge ceremonies. "Mid-evening on the night of the-unknown-to-anybody at the time up-coming crash I had gone to bed in the bunk in my compartment and as far as I knew had fallen fast asleep. THE SPIRITUAL ELDER AND THE SANTA FE CHIEF SANTA FE LOCOMOTIVE #3774THE UNCARVED BLOCKYurok Medicine Man, The Other Californians, Robert F. "Unlike the medicine man, the Shaman's adoption of his profession is in many cases not voluntary.

15 Things You Should Give Up To Be Happy Here is a list of 15 things which, if you give up on them, will make your life a lot easier and much, much happier. We hold on to so many things that cause us a great deal of pain, stress and suffering – and instead of letting them all go, instead of allowing ourselves to be stress free and happy – we cling on to them. Not anymore. Starting today we will give up on all those things that no longer serve us, and we will embrace change. Ready? 1. There are so many of us who can’t stand the idea of being wrong – wanting to always be right – even at the risk of ending great relationships or causing a great deal of stress and pain, for us and for others. 2. Be willing to give up your need to always control everything that happens to you and around you – situations, events, people, etc. “By letting it go it all gets done. 3. Give up on your need to blame others for what you have or don’t have, for what you feel or don’t feel. 4. Oh my. “The mind is a superb instrument if used rightly. 5. 6.

Selling the Sacred: Get Your Master's in Native American Shamanism? - Indian Country Media Network New Age spirituality has been building momentum for more than a century, according to scholars—who don’t like it any more than Native people do. Author Harold Bloom called New Age practices “the American religion” that “has been emptying our politics and our private lives of meaning.” A reviewer of another author, Catherine Tumber, said New Agers are “fungus-like, out of our uncontrolled capitalism.” There is one thing the critics missed though, and that is what New Agers are doing in Indian country. A case in point is the Divine Blessings Academy, which objectifies and quantifies spirituality as a product for sale. This image shows a screen capture from the Divine Blessings Academy Course Catalog for Introduction to Shamanism. Shamanism is a term used often in South America for one who is able to obtain healing through communication with spirits. All of these courses are offered through downloadable PDF files. RELATED: Native History: A Non-Traditional Sweat Leads to Three Deaths