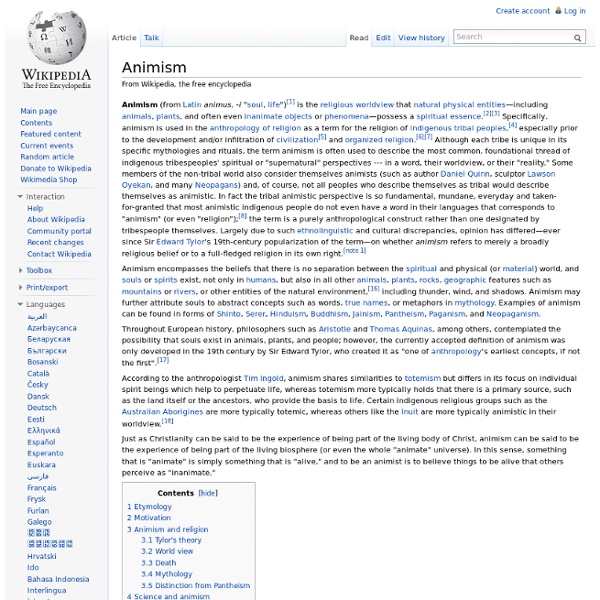 Specifically, animism is used in the anthropology of religion as a term for the belief system or cosmology of some indigenous tribal peoples,[5] especially prior to the development and/or infiltration of colonialism and organized religion.[6] Although each culture has its own different mythologies and rituals, "animism" is said to describe the most common, foundational thread of indigenous peoples' "spiritual" or "supernatural" perspectives. The animistic perspective is so fundamental, mundane, everyday and taken-for-granted that most animistic indigenous people do not even have a word in their languages that corresponds to "animism" (or even "religion");[7] the term is an anthropological construct rather than one designated by the people themselves. Largely due to such ethnolinguistic and cultural discrepancies, opinion has differed on whether animism refers to a broad religious belief or to a full-fledged religion in its own right. Theories of animism[edit] Religion and animism[edit]

Griot Senegalese Wolof griot, 1890 A griot (/ˈɡri.oʊ/; French pronunciation: ​[ɡʁi.o]), jali or jeli (djeli or djéli in French spelling) is a West African historian, storyteller, praise singer, poet and/or musician. The griot is a repository of oral tradition, and is also often seen as something of a societal leader due to his traditional position as an adviser to royal personages. As a result of the former of these two functions, he is sometimes also called a bard. Griots today live in many parts of West Africa, and are present among the Mande peoples (Mandinka, Malinké, Bambara, etc.), Fulɓe (Fula), Hausa, Songhai, Tukulóor, Wolof, Serer, Mossi, Dagomba, Mauritanian Arabs and many other smaller groups. In African languages, griots are referred to by a number of names: jeli in northern Mande areas, jali in southern Mande areas, guewel in Wolof, gawlo in Pulaar (Fula). Terms "griot" and "jali"[edit] In the Mali Empire[edit] In Mande society[edit] Today[edit] In popular culture[edit] Gambia[edit]

Meroë Meroë is northeast of Khartoum (center right). Coordinates: Meroë /ˈmɛroʊeɪ/ (also spelled Meroe[1][2]) (Meroitic: Medewi or Bedewi; Arabic: مرواه Meruwah and مروى Meruwi, Ancient Greek: Μερόη, Meróē) is an ancient city on the east bank of the Nile about 6 km north-east of the Kabushiya station near Shendi, Sudan, approximately 200 km north-east of Khartoum. Near the site are a group of villages called Bagrawiyah. The city of Meroë was on the edge of Butana and there were two other Meroitic cities in Butana, Musawwarat es-Sufra and Naqa.[3][4] The presence of numerous Meroitic sites within the western Butana region and on the border of Butana proper is significant to the settlement of the core of the developed region. The Kingdom of Kush which housed the city of Meroe represents one of a series of early states located within the middle Nile. The site of the city of Meroë is marked by more than two hundred pyramids in three groups, of which many are in ruins. History[edit] "2. Notes[edit]

Kalahari Desert Kalahari in Namibia The Kalahari Desert (in Afrikaans Kalahari-woestyn) is a large semi-arid sandy savannah in southern Africa extending 900,000 square kilometres (350,000 sq mi), covering much of Botswana and parts of Namibia and South Africa. A semi-desert, with huge tracts of excellent grazing after good rains, the Kalahari supports more animals and plants than a true desert, such as the Namib Desert to the west. There are small amounts of rainfall and the summer temperature is very high. The driest areas usually receive 110–200 millimetres (4.3–7.9 in) of rain per year,[1] and the wettest just a little over 500 millimetres (20 in). Description[edit] Flora[edit] Despite its aridity, the Kalahari supports a variety of flora. In an area of about 600,000 km² in the south and west of the Kalahari the vegetation is mainly xeric savanna. A totally different vegetation is adapted to the perennial fresh water of the Okavango Delta, an ecoregion termed (Zambezian flooded grasslands AT0907).[4]

Sahara The top image shows the Safsaf Oasis on the surface of the Sahara. The bottom (using radar) is the rock layer underneath, revealing black channels cut by the meandering of an ancient river that once fed the oasis. The Sahara (Arabic: الصحراء الكبرى‎, aṣ-Ṣaḥrāʾ al-Kubrā , 'the Great Desert') is the world's hottest desert, and the third largest desert after Antarctica and the Arctic.[1] At over 9,400,000 square kilometres (3,600,000 sq mi), it covers most of North Africa, making it almost as large as China or the United States. The Sahara stretches from the Red Sea, including parts of the Mediterranean coasts to the Atlantic Ocean. To the south, it is delimited by the Sahel, a belt of semi-arid tropical savanna that composes the northern region of central and western Sub-Saharan Africa. Some of the sand dunes can reach 180 metres (590 ft) in height.[2] The name comes from the plural Arabic language word for desert (صحارى ṣaḥārā [3][4] [ˈsˤɑħɑːrɑː]).[5][6] Overview[edit] Geography[edit]

Tribal chief A tribal chief is the leader of a tribal society or chiefdom. Tribal societies with social stratification under a single (or dual) leader emerged in the Neolithic period out of earlier tribal structures with little stratification, and they remained prevalent throughout the Iron Age. In the case of indigenous tribal societies existing within larger colonial and post-colonial states, tribal chiefs may represent their tribe or ethnicity in a form of self-government. The term is usually distinct from chiefs at still lower levels, such as village headman (geographically defined) or clan chief (an essentially genealogical notion), as the notion "tribal" rather requires an ethno-cultural identity (racial, linguistic, religious etc.) as well as some political (representative, legislative, executive and/or judicial) expression. History[edit] After the collapse of the Western Roman Empire, tribal kingdoms were again established over much of Europe in the wake of the Migration period. Americas[edit]

Massai Massai (also known as: Massa, Massi, Masai, Wasse or Massey; c.1847-1906,[1] 1911[2]) was a member of the Mimbres /Mimbreños local group of the Chihenne band of the Chiricahua Apache. He was a warrior who escaped from a train that was sending the scouts and renegades to Florida to be held with Geronimo and Chihuahua. Born to White Cloud and Little Star at Mescal Mountain, Arizona, near Globe.[3][4] He later married a local Chiricahua and they had two children.[5] Massai later met Geronimo, who was recruiting Apache to fight American settlers and soldiers. Another account states that Massai escaped over the border to Mexico, eventually settling in the Sierra Madre mountains with a group of rebellious Chiricahuas who had refused to surrender with Geronimo. See also[edit] References[edit]

society Kalahari Desert could dust up Southern Ocean Take a deep breath. If you live in the northern hemisphere then you will have inhaled a fair amount of dust. If you live in the southern hemisphere that breath was relatively dust free. However, new research indicates that the southern hemisphere is set to become dustier, as the South-African Kalahari Desert starts to erode. Over 90% of the world's airborne dust originates from northern hemisphere sources, such as the Bodélé Depression in northern Chad and the Sahara Desert in North Africa. The Kalahari Desert, in Botswana, Namibia and South Africa, is one such source. How much dust could the Kalahari release and what impact would it have? Each sample was placed in a custom made "dust generator" – a rotating tube with a gentle flow of air wafting through. However, unlike dust bowls, deserts tend to provide a limited source of dust. "Our trajectory analysis shows that the current wind regime is sufficient to transport dust to the Southern Ocean," said D'Odorico.