How The Bay Area's Filipino Mobile DJ Scene Turned High Schoolers into Future Turntablism Stars. The Cosmix Sounds crew in 1985 / Photo by Suzie Racho Decades before Bay Area kids were getting hyphy and riding around in scrapers, they were chasing another regional sound, one that has historically gotten less attention despite becoming influential on a global level. 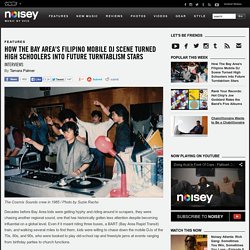 Discovery of Long-Lost Silent Film With All-Indian Cast Has Historians Reeling. How a silent film featuring an all-Native cast came to be made, lost (seemingly forever), discovered nearly a century later (in shambles), then restored and shown to the cast’s descendants is one of the most fascinating stories in the annals of American filmmaking. 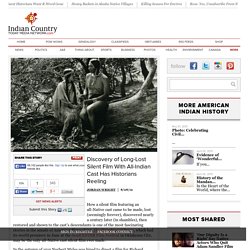 The Daughter of Dawn, which had its world premiere in June at the deadCENTER Film Festival in Oklahoma City, may be the only all-Native cast silent film ever made. In the autumn of 1919 Norbert Myles was hired to direct a film for Richard Banks, owner of the fledgling Texas Film Company. Banks, who had written the story for his new project, was looking to make an adventure film in Oklahoma. He had met Myles a few years earlier on a California movie set and was impressed by the ambitious upstart. Myles, who had been a vaudevillian, a screen actor and sometime Shakespearean actor, had fallen out of favor in Hollywood and had turned to screenwriting and directing. Most HS Grads Aren't Interested In Becoming Teachers, But Here Are Some Reasons Why They Should Be. Educators are currently in especially high demand, but fewer and fewer high school graduates want to become teachers, a new report finds. 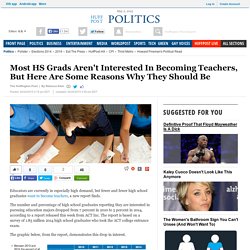 The number and percentage of high school graduates reporting they are interested in pursuing education majors dropped from 7 percent in 2010 to 5 percent in 2014, according to a report released this week from ACT Inc. The report is based on a survey of 1.85 million 2014 high school graduates who took the ACT college entrance exam. The graphic below, from the report, demonstrates this drop in interest. A Shockingly Low Number of High School Students Want to Be Teachers. Ask a teacher why he or she decided to enter the profession, and the answer tends to be some variation of the opportunity to mold young minds, see the light bulb go on, and help shape the future. 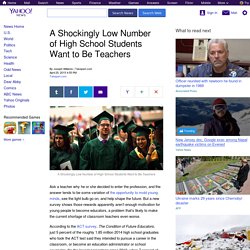 But a new survey shows those rewards apparently aren’t enough motivation for young people to become educators, a problem that’s likely to make the current shortage of classroom teachers even worse. According to the ACT survey, The Condition of Future Educators, just 5 percent of the roughly 1.85 million 2014 high school graduates who took the ACT test said they intended to pursue a career in the classroom, or become an education administrator or school counselor.

It’s the lowest percentage since 2010, when 7 percent of college-bound seniors said they intended to major in education. North America&apos;s largest powwow draws thousands to New Mexico. Droves of Native American and other indigenous performers and spectators have converged in New Mexico for the 32nd annual Gathering of Nations, North America's largest powwow. 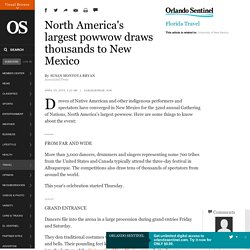 Here are some things to know about the event: More than 3,000 dancers, drummers and singers representing some 700 tribes from the United States and Canada typically attend the three-day festival in Albuquerque. The competitions also draw tens of thousands of spectators from around the world. Here Are the Jokes That Provoked Actors to Walk Off Adam Sandler's Set. Although lots of people have presumably wanted to walk off Adam Sandler sets, no one has ever had this good (or this public) an excuse until now. 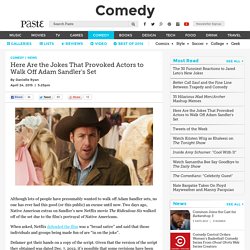 Two days ago, Native American extras on Sandler’s new Netflix movie The Ridiculous Six walked off of the set due to the film’s portrayal of Native Americans. When asked, Netflix defended the film was a “broad satire” and said that those individuals and groups being made fun of are “in on the joke”. Defamer got their hands on a copy of the script. Given that the version of the script they obtained was dated Dec. 7, 2012, it’s possible that some revisions have been made. Kuya Jake - Thesis on Vimeo. Challenge. 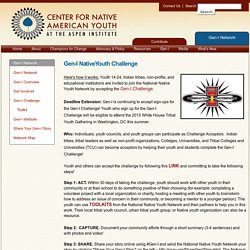 Document your community efforts through a short summary (3-4 sentences) and with photos and video! Step 3: SHARE. Share your story online using #Gen-I and send the National Native Youth Network your story by clicking "Share Your Gen-I Story" on the left -- The National Native Youth Network or the White House may even feature your story! DJ Béeso’s stream on SoundCloud - Listen to music. The Best American Infographics – Information conveyed in a fun, visual, and highly digestible way. “Put information in the right visual form and your audience will immediately get the gist.” – Gareth Cook In the new world of smart phones and hyper media that floods our waking hours with incessant information, it’s sometimes hard to focus on an article that’s longer than a couple of paragraphs. 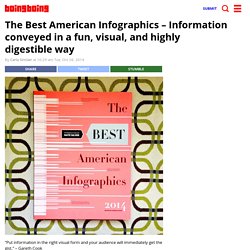 This is where infographics come in. Rather than taking hundreds of words or more to compare the top distilleries of bourbon, to explain how to make kale salad, or to describe the various routes and death statistics of climbing Mount Everest, information can be created in a fun, visual, and highly digestible way with an illustrated infographic. And looking at data visually can give you insight into information that a text-driven explanation would not. This book reprints the best infographics that were published for a North American audience in 2013, and editor Gareth Cook is now taking submissions for future editions. #JGINDIE/#ALCOUTURE. ABEER SEIKALY.

Human life throughout history has developed in alternating waves of migration and settlement. 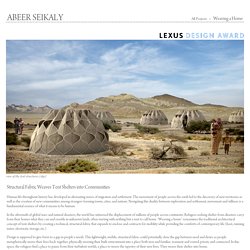 The movement of people across the earth led to the discovery of new territories as well as the creation of new communities among strangers forming towns, cities, and nations. Prefab Intershelter Dome Homes Pop Up Anywhere for Immediate Shelter. These prefabulous Intershelter domes can pop up practically anywhere to create an instant shelter. 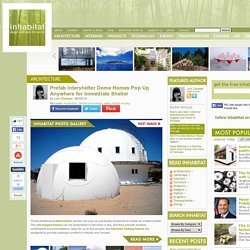 The orb-shaped homes can be assembled in less than a day, and they provide durable, comfortable accommodations. Ideal for up to five people, the futuristic looking homes are designed to provide optimum comfort in virtually any climate. Intershelters were designed to provide a comfortable place to stay just about anywhere. Teens Take a Bite Out of Business in High School Incubator Classes. Forget meager landscaping or babysitting operations. Some teens are creating booming large-scale businesses.

Researcher builds four-dimensional figure in his office. The curious child of bookish parents who browses through their libraries sometimes falls down a rabbit hole while apparently reading quietly in an armchair. Something like this happened to Ivan Horozov, PhD, the William Chauvenet lecturer in the Department of Mathematics in Arts & Sciences at Washington University in St. Louis. Horozov grew up in Sofia, Bulgaria, the child of a mathematician whose library included the book "Geometry and the Imagination" by Hilbert and Cohn-Vossen.

The book, which he says reads like a storybook rather than a textbook, explores regular geometric shapes—which mathematicians call polytopes—in two, three and four spatial dimensions. A square is a two-dimensional polytope; its three dimensional analog is a cube and its four-dimensional analog is something called a tesseract. Web Extra: New Tent City In Albuquerque. Tea Tuesdays: Gift Of The Moon, Bane Of The Spanish: The Story Of Yerba Mate. A gourd of yerba mate. Legend has it that the moon gifted this infusion to the Guaraní people of South America. iStockphoto hide caption itoggle caption iStockphoto. 5 Ways The Government Keeps Native Americans In Poverty. What this spring’s Common Core tests promised, and what they will actually deliver. New Common Core tests are debuting on time this spring, but after years of bruising attacks from both left and right, the groups tapped by the federal government to build them are struggling to meet all the hype. Back in 2010, the plans for the new exams were introduced with much fanfare and many promises: The exams would end the era of dumbed-down multiple-choice tests and the weeks of mindless prepping that precede them.

They would force teachers to introduce more critical thinking and in-depth study. They would bring coherency to a mishmash of state tests and for the first time allow states to compare local students to their peers elsewhere in the U.S. And with their online format, the new tests would make testing more efficient, more accurate and more relevant to the digital age. New Mexico students join others in nation against new tests. Study Shows Secret To Managing Millennials Can Be Summed Up In One Word. Write on Race: Students, HB249, PARCC and the Abq Journal. C. Rogers, Educator sur Twitter : "Raza Studies produced this graphic. everything I refer to. #forum36... “Their Sky Has Changed!” Inuit elders sharing information with NASA regarding Earth’s “WOBBLE” Growing the Herb - Indian Country News. Not 'completely disinfected' sewage spills into river. ALBUQUERQUE, N.M. Could classical theory be just as weird as quantum theory?

9 reasons Finland's schools are so much better than America's. Millennials Aren’t All Bad — If You Know How to Inspire Them. Alan Cutter | February 19, 2015 | 17 Comments. Logic Model. A Documentary Film by Jennifer Kumiko Hayashi. Share this project Done Share Tweet Embed Tweet Share Email. When Pot Goes From Illegal To Recreational, Schools Face A Dilemma. Schools in Colorado are trying to find effective ways to teach the health effects of marijuana use. A. Maceo Smith New Tech High School - Uptown Funk Dance. Pot Policy Splits Native Americans Over Whether Business Is Worth It : Code Switch.