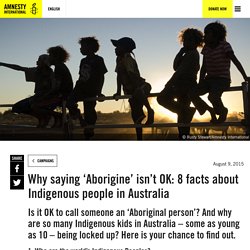 Who are the world’s Indigenous Peoples? More than 370 million people across 70 countries worldwide identify as Indigenous. They belong to more than 5,000 different groups, and speak more than 4,000 languages. 'Indigenous Peoples' is the accepted way of referring to them all as a collective group - the equivalent of saying 'the British', or 'Australians'. In international law, 'Indigenous' acknowledges that a person’s ancestors lived on particular lands, before new people arrived and became dominant. 2. They are the proud keepers of arguably the oldest continuous culture on the planet. Torres Strait Islanders, from the islands between north-eastern Queensland and Papua New Guinea, originate from Melanesia in the western Pacific, and have their own distinct culture. 3. 'Aborigine' is generally perceived as insensitive, because it has racist connotations from Australia’s colonial past, and lumps people with diverse backgrounds into a single group. 4. 5.

BEENLEIGH HOUSING & DEVELOPMENT COMPANY - Home. Comments. Australian Aboriginal Stories of Ancient Sea-Level Rise Preserved for 13,000 Years. According to a duo of Australian scientists, Aboriginal society has preserved memories of Australia’s coastline dating back to 11,000 – 5,300 BC. 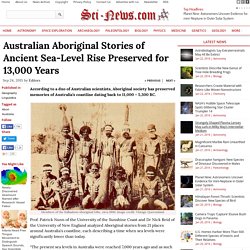 Members of the Kalkadoon Aboriginal tribe, circa 1900. Image credit: Vintage Queensland. Prof. Patrick Nunn of the University of the Sunshine Coast and Dr Nick Reid of the University of New England analyzed Aboriginal stories from 21 places around Australia’s coastline, each describing a time when sea levels were significantly lower than today. “The present sea levels in Australia were reached 7,000 years ago and as such any stories about the coastline stretching much further out to sea had to pre-date that time,” “These stories talk about a time when the sea started to come in and cover the land, and the changes this brought about to the way people lived – the changes in landscape, the ecosystem and the disruption this caused to their society.”

David Unaipon Born. ON 28 SEPTEMBER 1872, David Unaipon was born on a modest indigenous mission on the banks of South Australia’s Lake Alexandrina, 80km south-east of Adelaide. 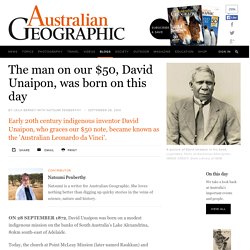 Today, the church at Point McLeay Mission (later named Raukkan) and Unaipon’s face both grace the Aussie $50 note. Beside them is Unaipon’s best-known invention – a modified design for shearing shears that changed the once circular blade to a straight one. It’s a design still used today. But, the shears were just one contribution among many. David was a polymath (someone with a wide or encyclopaedic knowledge).

Indeed, he was a man with a vision akin to Leonardo da Vinci's. Australian Aborigines may have colonised the Amazon. It was a continent thought to have been uninhabited by humans until around 15,000 years ago when the 'First Americans' came across a tiny strip of land over the Bering Strait. 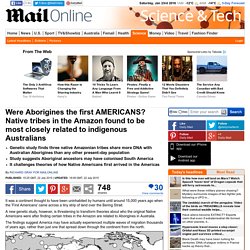 A new genetic study, however, is threatening to transform theories about who the original Native Americans were after finding certain tribes in the Amazon are related to Aborigines in Australia. The findings suggest America may have actually experienced multiple waves of migration thousands of years ago, rather than just one that spread down through the continent from the north. Geneticists have found that Native American tribes living in the Amazon are most closely related to Aborigines from Australia, Papau New Guinea and the Andaman Islands, as shown in the image above, where warm colours show the greatest level of genetic affinity. White circles show populations with no genetic link. Aboriginal people – how to misunderstand their science. Just one generation ago Australian schoolkids were taught that Aboriginal people couldn’t count beyond five, wandered the desert scavenging for food, had no civilisation, couldn’t navigate and peacefully acquiesced when Western Civilisation rescued them in 1788. 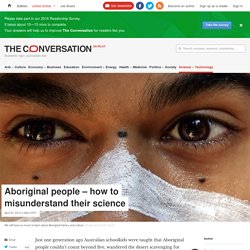 How did we get it so wrong? Australian historian Bill Gammage and others have shown that for many years land was carefully managed by Aboriginal people to maximise productivity. This resulted in fantastically fertile soils, now exploited and almost destroyed by intensive agriculture. In some cases, Aboriginal people had sophisticated number systems, knew bush medicine, and navigated using stars and oral maps to support flourishing trade routes across the country. They mounted fierce resistance to the British invaders, and sometimes won significant military victories such as the raids by Aboriginal warrior Pemulwuy. Only now are we starting to understand Aboriginal intellectual and scientific achievements.

Indigenous seasons calendars. We have worked with a number of Indigenous language groups to create a series of calendars representing their seasonal and ecological knowledge. 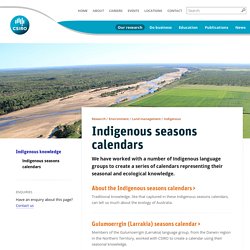