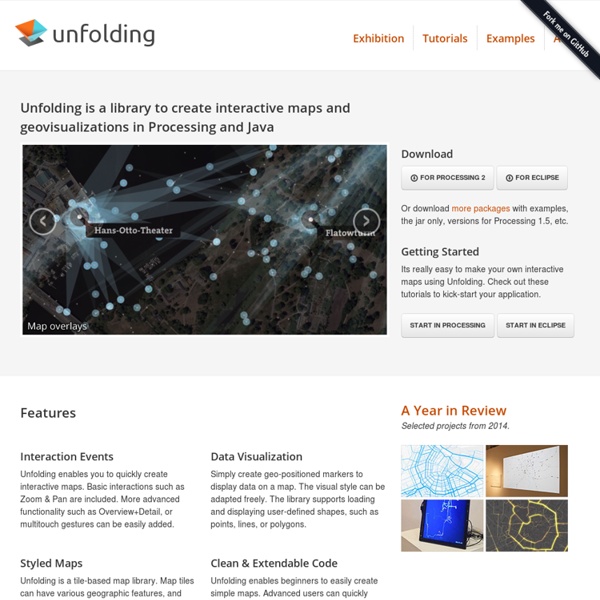 Interaction Events Unfolding enables you to quickly create interactive maps. Basic interactions such as Zoom & Pan are included. More advanced functionality such as Overview+Detail, or multitouch gestures can be easily added. Data Visualization Simply create geo-positioned markers to display data on a map.

featured projects Quantified Other Five weeks of my father's Nike Fuel data Tatelets Generative bracelet based on artworks from Tate Modern Geocomputation with R Development Inspired by the bookdown R package we are developing this book in the open. We decided to make the book open source to encourage contributions, ensure reproducibility and provide access to the material as it evolves. processing GUI, controlP5 About controlP5 is a library written by Andreas Schlegel for the programming environment processing. Last update, 07/30/2015. Controllers to build a graphical user interface on top of your processing sketch include Sliders, Buttons, Toggles, Knobs, Textfields, RadioButtons, Checkboxes amongst others and can be easily added to a processing sketch. 40 Essential Tools and Resources to Visualize Data One of the most frequent questions I get is, "What software do you use to visualize data?" A lot of people are excited to play with their data, but don't know how to go about doing it or even start. Here are the tools I use or have used and resources that I own or found helpful for data visualization â€“ starting with organizing the data, to graphs and charts, and lastly, animation and interaction. Organizing the Data by sleepy sparrow

Textmining: Clustering, Topic Modeling, and Classification Introduction This demo will cover the basics of clustering, topic modeling, and classifying documents in R using both unsupervised and supervised machine learning techniques. We will also spend some time discussing and comparing some different methodologies. Drawing forests on a fantasy map - 3 styles - Fantasy Worldbuilding In this tutorial, I will be showing you how to draw forests on your fantasy map in three styles! Style 1 This first style uses repeated tree shapes to create a forest. You can use shapes shown in the first example to create a traditional forest style and use the second, rectangular style of tree, to create evergreen forests on your fantasy map.

Drawing a map of distributed data systems Designing Data-Intensive Applications, the book I’ve been working on for four years, is finally finished, and should be available in your favorite bookstore in the next week or two. An incomplete beta (Early Release) edition has been available for the last 2 1/2 years as I continued working on the final chapters. Throughout that process, we have been quietly working on a surprise. Something that has not been part of any of the Early Releases of the book. In fact, something that I have never seen in any tech book. And today we are excited to share it with you. Topic Modeling the Colonial Newspaper Database In Module 3, we used TEI to mark up primary documents. Melodee Beals has been using TEI to markup newspaper articles, creating the Colonial Newspapers Database (which she shared on github). We then used Github Pages and an XLST stylesheet to convert that database into a table of comma-separated values We are now going to topic model the text of those newspaper articles, to see what patterns of discourse may lie within. First we need to set up our workspace. On my machine, I’ve created a folder on my desktop called ‘Beals’ to keep all of this neat and tidy.

Use Animation to Supercharge Data Visualization 3 NPR Planet Money’s Fall and Rise of US Inequality — NPR’s Planet Money department often supplements its excellent podcast series with similarly well-crafted data visualizations. Early in 2015, they produced an interactive and animated graphic showing the striking distinction between income growth patterns pre-1980 and from 1980 to 2012. The creators adeptly blend animation with annotation to clearly illustrate which portion of the working population grew their income in each time period, and how the gap between highest and lowest earners has surged in recent decades. 4 Windyty’s Global Weather Visualization — Extremely simple and elegant, Windyty animates wind, temperature, clouds/rain, waves, snow, and air pressure patterns across the globe, drawing on data from the Global Forecast System’s weather model. Users can drag and zoom to their location, and can play an animated projection of forecasted weather for two weeks — a snippet showing a two-day period is shown below.

Showcases on Datavisualization Interactively Explore the YOLO Flip 12 Feb 2014 Showcases Animation, Interactive, Process, Sports In preparation of the Winter Olympic Games 2014 in Sochi, we helped the Swiss newspaper Neue Zürcher Zeitung publish a long-form article about Iouri Podladtchikov, a professional snowboarder and – since yesterday – freshly baked Olympic gold medalist. To help readers better understand the sport, we created a series of illustrations and an interactive animation.