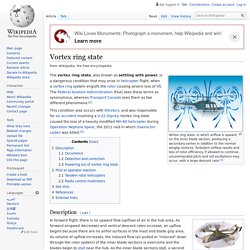 Turbulent airflow results and loss of rotor efficiency. If allowed to continue, uncommanded pitch and roll oscillations may occur, with a large descent rate.[1] This condition also occurs with tiltrotors, and was responsible for an accident involving a V-22 Osprey. Vortex ring state caused the loss of a heavily modified MH-60 helicopter during Operation Neptune Spear, the 2011 raid in which Osama bin Laden was killed.[3] Description[edit] The curved arrows indicate airflow circulation about the rotor disc. List of online databases. List of academic databases and search engines. Wikipedia list article This page contains a representative list of notable databases and search engines useful in an academic setting for finding and accessing articles in academic journals, institutional repositories, archives, or other collections of scientific and other articles.

Ontology (information science) While the etymology is Greek, the oldest extant record of the word itself, the New Latin form ontologia, appeared in 1606 in the work Ogdoas Scholastica by Jacob Lorhard (Lorhardus) and in 1613 in the Lexicon philosophicum by Rudolf Göckel (Goclenius). 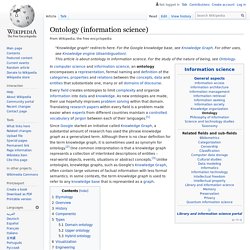 The first occurrence in English of ontology as recorded by the OED (Oxford English Dictionary, online edition, 2008) came in Archeologia Philosophica Nova or New Principles of Philosophy by Gideon Harvey. Contemporary ontologies share many structural similarities, regardless of the language in which they are expressed. Database journalism. Database journalism or structured journalism is a principle in information management whereby news content is organized around structured pieces of data, as opposed to news stories. 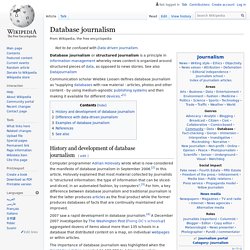 See also Datajournalism Communication scholar Wiebke Loosen defines database journalism as "supplying databases with raw material - articles, photos and other content - by using medium-agnostic publishing systems and then making it available for different devices. "[1] Zooming user interface. Example of a ZUI When the level of detail present in the resized object is changed to fit the relevant information into the current size, instead of being a proportional view of the whole object, it's called semantic zooming.[1] Some experts consider the ZUI paradigm as a flexible and realistic successor to the traditional windowing GUI, being a Post-WIMP interface. 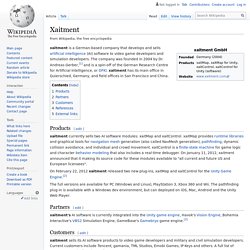 On January 11, 2012, xaitment announced that it making its source code for these modules available to "all current and future US and European licensees". The full versions are available for PC (Windows and Linux), PlayStation 3, Xbox 360 and Wii. The pathfinding plug-in is available with a Windows dev environment, but can deployed on iOS, Mac, Android and the Unity Web Player. XSLT. XSLT (eXtensible Stylesheet Language Transformations) is a language for transforming XML documents into other XML documents,[1] or other formats such as HTML for web pages, plain text or XSL Formatting Objects, which may subsequently be converted to other formats, such as PDF, PostScript and PNG.[2] XSLT 1.0 is widely supported in modern web browsers.[3] The original document is not changed; rather, a new document is created based on the content of an existing one.[4] Typically, input documents are XML files, but anything from which the processor can build an XQuery and XPath Data Model can be used, such as relational database tables or geographical information systems.[1] 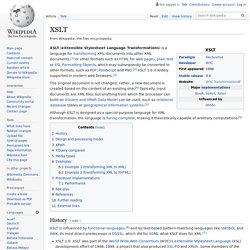 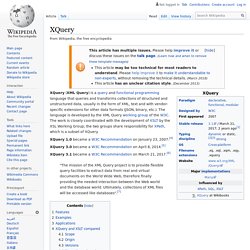 The language is developed by the XML Query working group of the W3C. The work is closely coordinated with the development of XSLT by the XSL Working Group; the two groups share responsibility for XPath, which is a subset of XQuery. XQuery 1.0 became a W3C Recommendation on January 23, 2007.[4] XQuery 3.0 became a W3C Recommendation on April 8, 2014.[5] XLink. XML Linking Language, or XLink, is an XML markup language and W3C specification that provides methods for creating internal and external links within XML documents, and associating metadata with those links.[1] The XLink specification[edit] XLink 1.1 is a W3C recommendation[2] and the successor of XLink 1.0, which was also a W3C recommendation.[3][4] Linking with XLink[edit] Simple links[edit] A simple link creates a unidirectional hyperlink from one element to another via a URI. 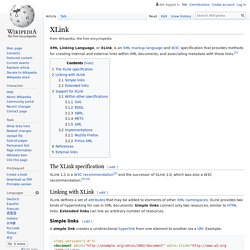 XInclude. XInclude is a generic mechanism for merging XML documents, by writing inclusion tags in the "main" document to automatically include other documents or parts thereof.[1] The resulting document becomes a single composite XML Information Set. 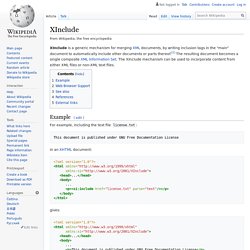 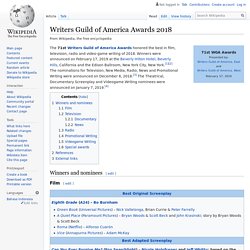 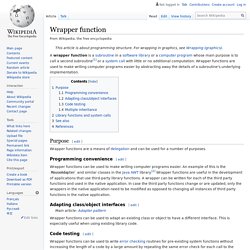 An example of this is the MouseAdapter and similar classes in the Java AWT library.[2] Wrapper functions are useful in the development of applications that use third-party library functions. A wrapper can be written for each of the third party functions and used in the native application. Workflow. An IMRAD model for developing research articles. Windows Script Host. It is language-independent in that it can make use of different Active Scripting language engines. By default, it interprets and runs plain-text JScript (.JS and .JSE files) and VBScript (.VBS and .VBE files). Users can install different scripting engines to enable them to script in other languages, for instance PerlScript. The language independent filename extension WSF can also be used. The advantage of the Windows Script File (.WSF) is that it allows multiple scripts ("jobs") as well as a combination of scripting languages within a single file.

WMI complements these other standards by providing a uniform model. This model represents the managed environment through which management data from any source can be accessed in a common way. Whiteboard animation. Whiteboard animation video example. White-label product. Web service. Web search engine. Software system that is designed to search for information on the World Wide Web. Web scraping. Web science. Human behavior co-constituting the web. Web science is an emerging interdisciplinary field concerned with the study of large-scale socio-technical systems, particularly the World Wide Web.[1][2] It considers the relationship between people and technology, the ways that society and technology co-constitute one another and the impact of this co-constitution on broader society.