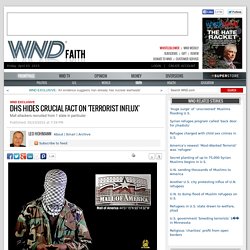 Homeland Security Chief Jeh Johnson warned that a Somalia-based terrorist group is encouraging “independent actors” to carry out attacks in Western countries, with the Mall of America in Minnesota among the specific targets, but he failed to mention that the U.S. continues to import hundreds of high-risk Islamic refugees from Somalia every month. The U.S. State Department’s refugee-resettlement program has placed more than 100,000 Somalis into U.S cities and towns since the early 1990s – nearly all of them Muslims hand-selected by the United Nations refugee agency. Other Drudge. Other Drudge. FCC Commissioners Ask Wheeler To Delay Net Neutrality Vote. Tweet Three days before the Federal Communications Commission is scheduled to vote on the most significant Internet regulations in history, two commissioners are asking Chairman Tom Wheeler to delay the vote and release his proposal to the public. 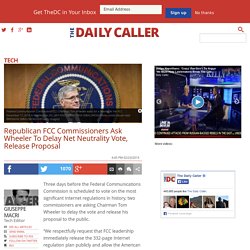 “We respectfully request that FCC leadership immediately release the 332-page Internet regulation plan publicly and allow the American people a reasonable period of not less than 30 days to carefully study it,” Republican Commissioners Ajit Pai and Michael O’Rielly said in a statement Monday. “Then, after the commission reviews the specific input it receives from the American public and makes any modifications to the plan as appropriate, we could proceed to a final vote.” » ‘Fifty Shades Of Grey’ Word Search Puzzles Given to Middle School Students Alex Jones' Infowars: There's a war on for your mind! Other Drudge. 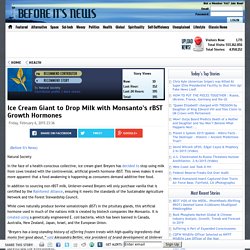 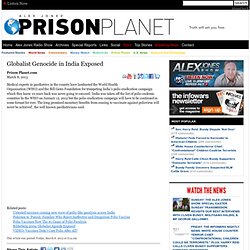 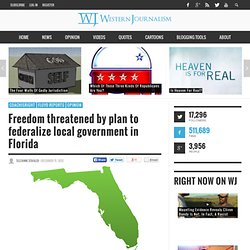 Strategic Relocation the film FULL VERSION HQ. Map of Active U.S. FEMA Camps: Is There One Near You? BREAKING! August 2012 UN ~ NATO MARTIAL LAW USA! Insider: U.S. Ambassador Killing an Inside Job! Obama Death Squads Fan Out Across America As Rebellion Looms. A grim Federal Security Forces (FSB) “urgent action” memorandum prepared for President Putin is warning that United States President Barack Obama has ordered at least 800 highly trained “death squad” units to disperse throughout his country in preparation for what Russian intelligence analysts are predicting to be a series of high-profile killings of dissident Americans set to begin as soon as February 22nd. 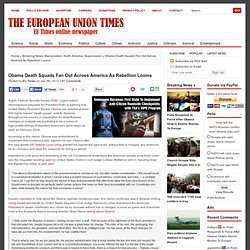 According to this memo, Obama was emboldened to implement this murderous plan against his own citizens after this past weeks US Federal Court ruling granted his regime the right to kill, without trial or charges, any American he so chooses, and keep the reason(s) for doing so secret. Important to note about this shredding of the US Constitutional protections the American people once lived under was the disgusted wording used by United States District Court Judge Colleen McMahon who in handing down this frightening ruling, in part, said: Source. Lifesitenews. EndGame HQ full length version. FEMA Red/Blue List – Marked For Termination.

We are all on a Red or Blue list somewhere, those on the red list will be woken at 4am and taken to the camps and probably killed. 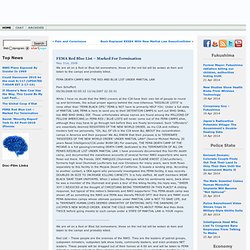 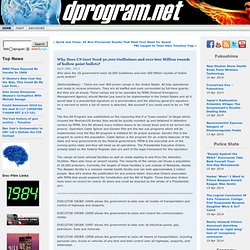 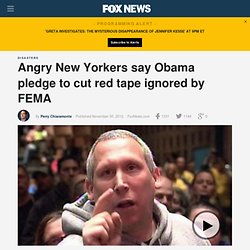 Angry citizens vented at FEMA officials at a town hall meeting held by the disaster relief agency Thursday, with tempers boiling over. Some 1,000 people, many left homeless by the Oct. 29 storm, attended the meeting at Staten Island’s New Dorp High School. They were initially scheduled to submit written questions that would be picked and answered at random, but the session turned into an angry shouting match where residents booed FEMA officials and accused them of lying.

"I told the president … that FEMA was giving us the royal finger. Mold? Leaky Roof? Obama Administration Says All Americans Must Have 'Healthy Housing' Peeling lead paint is one of the hazards the Obama's administration's new "Advancing Healthy Homes" initiative seeks to remedy. 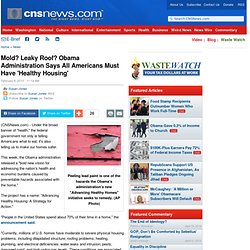 (AP Photo) (CNSNews.com) - Under the broad banner of "health," the federal government not only is telling Americans what to eat, it's also telling us to make our homes safer. This week, the Obama administration released a "bold new vision for addressing the nation's health and economic burdens caused by preventable hazards associated with the home. " Coexist with Monsanto or destroy it? Follow the organic money. Coexist with Monsanto or destroy it? Follow the organic money. By Jon Rappoport October 13, 2013. American Boondoggle - Fixing the 2012 Farm Bill. There is an easy way forward on farm policy, and it is not contained in either the House or Senate versions of the Farm Bill that are about be considered by a conference committee. The answer is to extend current law, minus the indefensible direct payments program that almost everyone agrees needs to go. Ranking the current farm subsidy proposals in the bills that have been approved by the Senate and the House helps shed light on what’s happening, and why extending current law—with simple, common-sense reforms—is the best and most realistic option.

White House Stalls EPA Report. Sheila Kaplan A landmark Environmental Protection Agency report concluding that children exposed to toxic substances can develop learning disabilities, asthma and other health problems has been sidetracked indefinitely amid fierce opposition from the chemical industry. America’s Children and the Environment, Third Edition is a sobering analysis of the way in which pollutants build up in children’s developing bodies and the damage they can inflict. The report is unpublished, but was posted on EPA’s website in draft form in March 2011, marked “Do not Quote or Cite.” The report, which is fiercely contested by the chemical industry, was referred to the White House Office of Management and Budget (OMB), where it still languishes.

Politics of Postponement In the making since 2008, the ACE report is based on peer-reviewed research and databases from federal agencies, including the Food and Drug Administration, Housing and Urban Development and the Centers for Disease Control and Prevention. 6 tanks at Hanford nuclear site in Wash. leaking. FILE - In this July 14, 2010 photo, workers at the Hanford nuclear reservation work around a a tank farm where highly radioactive waste is stored underground near Richland, Wash.