Forever 21 downsizing in UK already. FashionUnited brought you an exclusive interview with, US fashion retailer, Forever 21’s family based founder, when they launched on UK soil. 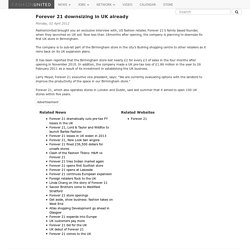 Now less than 18months after opening, the company is planning to downsize its first UK store in Birmingham. The company is to sub-let part of the Birmingham store in the city’s Bullring shopping centre to other retailers as it reins back on its UK expansion plans. Forever 21 “Best Summer Ever” - Girls Of T.O.Girls Of T.O. Don’t you just want to spend the summer with friends, laying by the pool in your favourite suit, listening to music and just doing whatever you wanted? 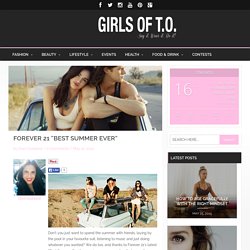 We do too, and thanks to Forever 21’s latest “Best Summer Ever” campaign, we are needing that more than ever this year. The latest campaign features an array of colorful prints and patterns from their latest collection of spring and summer essentials. Think crop tops, onesies, maxi & floral dresses and cut off shorts which are all idea items for your wardrobe this season. No matter what you’re looking for and where you are heading this season, Forever 21 has all the summer essentials for the ladies. Breeze through this warm season with pieces ranging from only $4.80-$27.80 USD! Kick back and look through the campaign images and watch the two-part fashion film opens with three friends kicking back poolside at a retro motel and then onto an epic road trip across the California desert.

#F21FESTIVAL PINTEREST CONTEST - ENTER FOR A CHANCE TO WIN A FESTIVAL GETAWAY! Finally… Festival season is upon us and we’re kicking it off this year with something MAJOR. 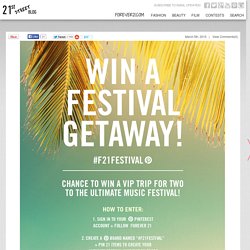 If you were lucky and got to flock to festival last year, you know how massive this event is for all music and fashion lovers around the world. Forever 21 - Fast Fashion Retail Brand With An Edge - Martin Roll. Forever 21 became one of the largest and most competitive fast fashion retail brands in the world competing on cheap price points, merchandise, prime locations and rapid global logistics. 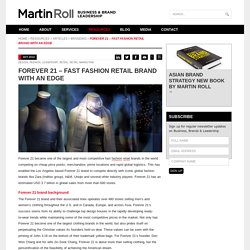 This has enabled the Los Angeles based Forever 21 brand to compete directly with iconic global fashion brands like Zara (Inditex group), H&M, Uniqlo and several other industry players. Forever 21 has an estimated USD 3.7 billion in global sales from more than 600 stores. Forever 21 brand background The Forever 21 brand and their associated lines operates over 480 stores selling men’s and women’s clothing throughout the U.S. and in Canada, Europe, and across Asia. You’re Going to Want EVERYTHING From Forever 21’s ‘Minimalist’ Section. Has anyone else noticed that Forever 21 has stepped it up, big time? 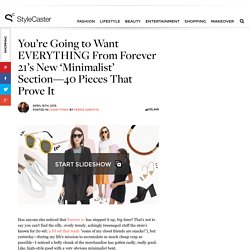 That’s not to say you can’t find the silly, overly trendy, achingly tweenaged stuff the store’s known for (to wit: a PJ set that reads “some of my closet friends are snacks!”) , but yesterday—during my life’s mission to accumulate as much cheap crap as possible—I noticed a hefty chunk of the merchandise has gotten really, really good. Like, high-style good with a very obvious minimalist bent. MORE: The 7 Habits of Highly Stylish People And it’s not only the selection of stuff that impressed me, but it’s the styling on the site, too. Forever 21 racks up £66.5m loss in the UK. Forever 21 also has stores in London on Oxford Street and at Westfield’s shopping centre next to the Queen Elizabeth Olympic Park in Stratford. 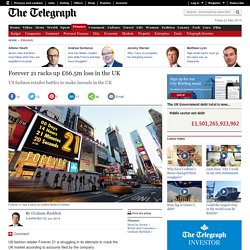 In total it has eight stores in Britain. British retailers have a chequered history of attempting to expand in the US, with Tesco losing billions of pounds in an attempt to establish a new grocery chain in America. However, US chains also have a mixed record in the UK. Forever 21’s accounts show that in the year to February 28 2013 its revenues grew from £23m to £37.1m on the back of new store openings. However, pre-tax losses grew from £7.6m to £66.5m because of a £44.5m writedown on the value of lease acquisitions and lease improvements. 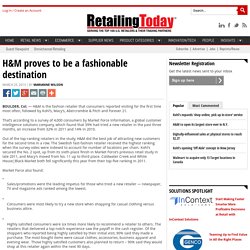 That’s according to a survey of 4,000 consumers by Market Force Information, a global customer intelligence solutions company, which found that 39% had tried a new retailer in the past three months, an increase from 32% in 2011 and 14% in 2010. Out of the top-ranking retailers in the study, H&M did the best job of attracting new customers for the second time in a row. The Swedish fast-fashion retailer received the highest ranking when the survey votes were indexed to account for number of locations per chain. Kohl’s secured the No. 2 spot, up from its sixth-place finish in Market Force’s previous retail study in late 2011, and Macy’s moved from No. 11 up to third place. Coldwater Creek and White House|Black Market both fell significantly this year from their top-five ranking in 2011. Market Force also found:

Uniqlo, H&M, or Forever 21: All Are Bad, But Who's The Best of the Bunch? By Aja Frost on November 26, 2014 This is the final installment of a 3-article series on the dangers of “fast fashion.” 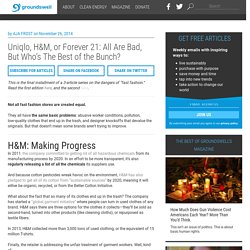 Read the first edition here, and the second here. Not all fast fashion stores are created equal. They all have the same basic problems: abusive worker conditions, pollution, low-quality clothes that end up in the trash, and designer knockoffs that devalue the originals. But that doesn’t mean some brands aren’t trying to improve. In 2011, the company committed to getting rid of all hazardous chemicals from its manufacturing process by 2020. And because cotton pesticides wreak havoc on the environment, H&M has also pledged to get all of its cotton from “sustainable sources” by 2020, meaning it will either be organic, recycled, or from the Better Cotton Initiative. What about the fact that so many of its clothes end up in the trash? In 2013, H&M collected more than 3,000 tons of used clothing, or the equivalent of 15 million T-shirts. Love, hate, want, favorite: How does H&M compare to Forever21? 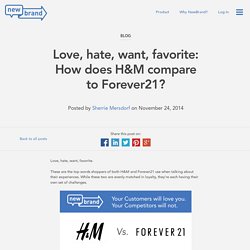 These are the top words shoppers of both H&M and Forever21 use when talking about their experiences. While these two are evenly matched in loyalty, they’re each having their own set of challenges. See the full matchup Wondering how your loyalty scores compare? Get a free competitive benchmark or contact us. Clash of the Fashion Titans: H&M vs Forever 21. This is the second part of 'Clash of the Fashion Titans,' an ongoing series from FashionUnited that compares key fashion retailers from around the world. 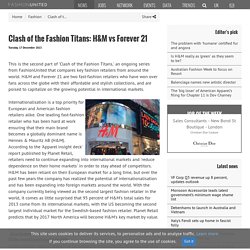 H&M and Forever 21 are two fast-fashion retailers who have won over fans across the globe with their affordable and stylish collections, and are poised to capitalize on the growing potential in international markets. Internationalisation is a top priority for European and American fashion retailers alike. One leading fast-fashion retailer who has been hard at work ensuring that their main brand becomes a globally dominant name is Hennes & Mauritz AB (H&M). According to the 'Apparel insight deck' report published by Planet Retail, retailers need to continue expanding into international markets and 'reduce dependence on their home markets' in order to stay ahead of competitors.

3 ways fashion brand Forever 21 could use search to make it big in the UK. Thought Bubble: Forever 21 caters to global audience. Thought Bubble is a regular feature on the Mintel blog highlighting multiple viewpoints on one topic from Mintel’s team of expert analysts around the globe. American fashion retailer Forever 21 opened its first shop in Brazil at the end of March, causing quite the stir among local shoppers. According to the local press, shoppers in São Paulo had to wait in line up to seven hours before getting their chance to even set foot in the store, let alone take advantage of the traditionally low prices offered by the popular retailer. In order to analyze this current retail phenomenon in Brazil, Mintel has invited three of its analysts from different parts of the globe to weigh in.