The Untold Casualties of the Drone War. Early one evening in November, Brandon Bryant, a former Air Force officer and perhaps the world's most famous drone program whistleblower, sits on the sofa in a Manhattan hotel suite, writing a letter to President Obama. 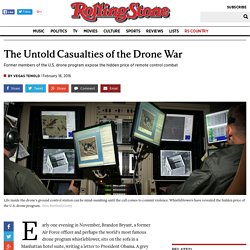 A grey hoodie is pulled over his baseball cap, the sleeves half-covering a red dragon and Nordic tribal tattoos on his arms and hands. For three years, he's spoken critically about his time flying drone missions in Iraq, Afghanistan, Pakistan, Yemen and Somalia — where he helped kill 1,626 people, according to his own performance review — but now he can't seem to find the right words. Between sips of water and occasional requests for feedback, Bryant furiously crosses out lines in the notebook he typically uses to write poetry. "I don't want it to sound too formal," he says. "It needs to read like it's coming from us and not from our lawyers. " Bryant finally offers his notebook to the group. Haas readily agrees. "Lewis has to be careful," Haas told me earlier. Exclusive: Skunk Works Reveals SR-71 Successor Plan.

Ever since Lockheed’s unsurpassed SR-71 Blackbird was retired from U.S. 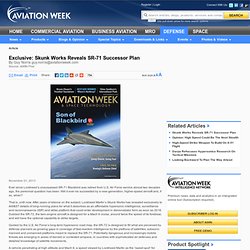 Air Force service almost two decades ago, the perennial question has been: Will it ever be succeeded by a new-generation, higher-speed aircraft and, if so, when? That is, until now. After years of silence on the subject, Lockheed Martin’s Skunk Works has revealed exclusively to AW&ST details of long-running plans for what it describes as an affordable hypersonic intelligence, surveillance and reconnaissance (ISR) and strike platform that could enter development in demonstrator form as soon as 2018. Dubbed the SR-72, the twin-engine aircraft is designed for a Mach 6 cruise, around twice the speed of its forebear, and will have the optional capability to strike targets. We are Predator UAV Pilot/Operators currently in Afghanistan. AMAA! : IAmA. Pain Continues after War for American Drone Pilot. For more than five years, Brandon Bryant worked in an oblong, windowless container about the size of a trailer, where the air-conditioning was kept at 17 degrees Celsius (63 degrees Fahrenheit) and, for security reasons, the door couldn't be opened.

Bryant and his coworkers sat in front of 14 computer monitors and four keyboards. When Bryant pressed a button in New Mexico, someone died on the other side of the world. Drone Wars: The people who make drones happen. Please support our site by enabling javascript to view ads. 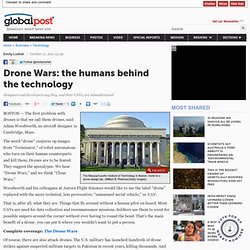 BOSTON — The first problem with drones is that we call them drones, said Adam Woodworth, an aircraft designer in Cambridge, Mass. The word “drone” conjures up images from “Terminator,” of robot automatons who turn on their human counterparts and kill them. Drones are to be feared. They suggest the apocalypse. We hear “Drone Wars,” and we think “Clone Wars.” Woodworth and his colleagues at Aurora Flight Sciences would like to see the label “drone” replaced with the more technical, less provocative, “unmanned aerial vehicle,” or UAV. That is, after all, what they are. Complete coverage: The Drone Wars Of course, there are also attack drones. US Drone Pilot: 'I Feel No Emotional Attachment' A drone pilot at the base at Hancock Field, near Syracuse, working the controls of a craft flying over Afghanistan. 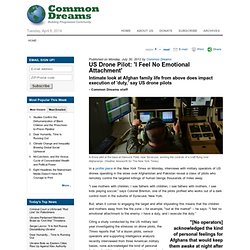 (Heather Ainsworth for The New York Times)In a profile piece in the New York Times on Monday, interviews with military operators of US drones operating in the skies over Afghanistan and Pakistan reveal a class of pilots who remotely control the targeted killings of human beings thousands of miles away. “I see mothers with children, I see fathers with children, I see fathers with mothers, I see kids playing soccer,” says Colonel Brenton, one of the pilots profiled who works out of a dark control room in the suburbs of Syracuse, New York. Drone warfare's deadly civilian toll: a very personal view. A US Predator drone in Afghanistan. 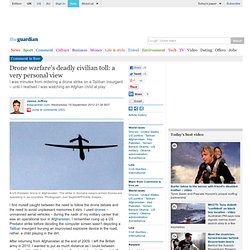 The strike in Somalia means armed drones are operating in six countries. Photograph: Joel Saget/AFP/Getty Images I find myself caught between the need to follow the drone debate and the need to avoid unpleasant memories it stirs. I used drones – unmanned aerial vehicles – during the nadir of my military career that was an operational tour in Afghanistan. 'I count the bodies and watch the funerals': Disturbing look inside the mind of a drone pilot. By Hugo Gye Published: 03:27 GMT, 9 June 2012 | Updated: 04:06 GMT, 9 June 2012 As controversy rages around the U.S. military's use of drone strikes to assassinate terror suspects, one author has given an unprecedented look at the mindset of a drone pilot. 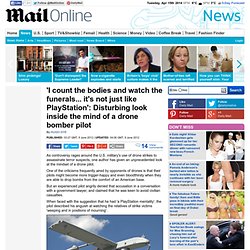 One of the criticisms frequently aired by opponents of drones is that their pilots might become more trigger-happy and even bloodthirsty when they are able to drop bombs from the comfort of an American base. But an experienced pilot angrily denied that accusation in a conversation with a government lawyer, and claimed that he was keen to avoid civilian casualties. Air Force Drone Operators Show High Levels of Stress.

Related:  News Worthy of Thought   -  US of A and those Wascally Terrorists   -  Education   -  Enterprise