Homemade Baked Beans (Vegetarian) - RecipeTin Eats. Here in Australia and over in the UK, baked beans are a popular breakfast dish, and for good reason. 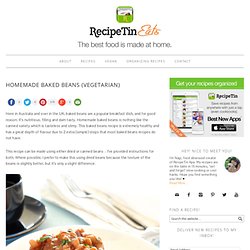 It’s nutritious, filling and darn tasty. Homemade baked beans is nothing like the canned variety which is tasteless and slimy. This baked beans recipe is extremely healthy and has a great depth of flavour due to 2 extra (simple) steps that most baked beans recipes do not have. This recipe can be made using either dried or canned beans – I’ve provided instructions for both. 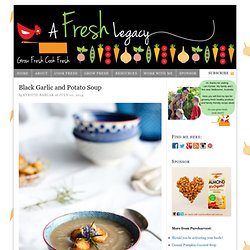 Parmesan Lemon Zucchini. The most amazing zucchini side dish made in 10 min or less. 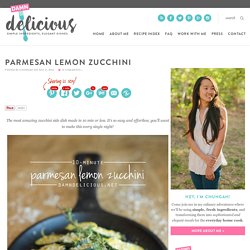 It’s so easy and effortless, you’ll want to make this every single night! I’ve made a lot of zucchini dishes lately – from the zucchini parmesan crisps to the baked parmesan zucchini to the one pot zucchini mushroom pasta, but nothing beats this one here. Roasted Dijon & Dill Potatoes - Krafted Koch. Blackberry, Rhubarb & Lemon Balm Crumble. Tis the season to be berry. 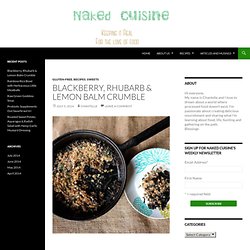 To exude the ripe, ephemeral sweetness with a touch of sour thrown in. Herbed Quinoa Garden Veggie Salad. Happy Fourth of July Week! 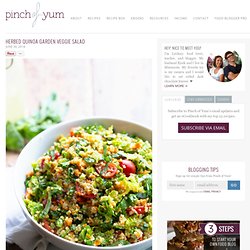 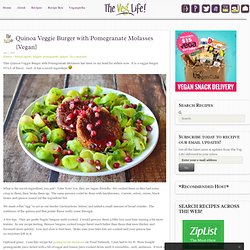 It is a veggie burger FULL of flavor. And…it has a secret ingredient. White Chocolate Baba Ghannouj. Middle Eastern flavors take an unexpected turn in this white chocolate baba ghannouj, which is a great mix of sweet, smoky, and savory. 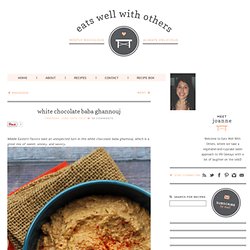 There are two kinds of people in this world. The first would see “white chocolate baba ghannouj” on a menu and then commence dry heaving in a corner at the possibility that there are people in this world who would consider eating such a thing. While the second would already be on their second bowl, and licking it clean. Herb baked cauliflower. Of top 10 foods I hated as a kid, cauliflower was most certainly among that list. 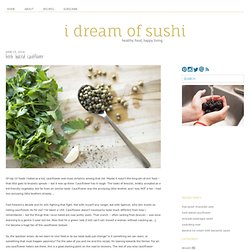 Maybe it wasn’t the king-pin of evil food – that title goes to brussels sprouts – but it was up there. Cauliflower has it rough. The looks of broccoli, widely accepted as a kid-friendly vegetable, but far from an similar taste. Zucchini, Feta, and Spinach Fritters with Garlic Tzatziki - Host The Toast Blog. You know how I said that the garlicky tzatziki from those Loaded Greek Chicken Pitzas was addictive? 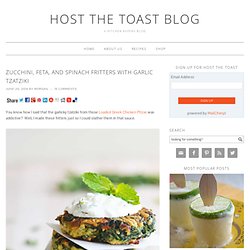 Well, I made these fritters just so I could slather them in that sauce. The Zucchini, Feta, and Spinach Fritters turned out amazingly, by the way. The taste almost reminded me of Spanakopita, but with the added mild flavor of grated zucchini, and the texture of Latkes. If that sounds right up your alley, you have to try these out.

They’re easy, chock full of veggies, and, of course, delicious. Speaking of “delicious”, I am so tired today because I am pretty positive a gigantic spider in my room thought that I looked delicious and was plotting to eat me last night. Thirsty Thursdays: Frozen Cherry Lemonade. So…this is the third week in a row that the only blogging I’ve done is the Thirsty Thursday post. 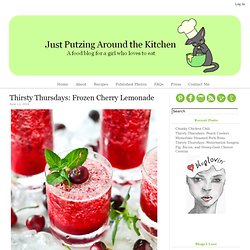 Sorry about that, guys…things have been busy, and I’ve been tired and under-motivated. I’ve got a bunch of awesome, non-drink posts in the queue though, I promise! For now, lets talk about today’s post. Today’s recipe is inspired by two posts I saw last week – the sparkling cherry lemonade from Damn Delicious, and the frozen blackberry basil lemonade from The Kitchen McCabe. Kitchen Konfidence - Avocado Kale Summer Rolls. During San Diego’s June Gloom, the weather is rarely ideal for going to the beach. Which makes me sad, because it’s around this time of the year that I start yearning for a beach day. Homemade Enchilada Sauce. This post is brought to you by Sub-Zero and Wolf and BlogHer. You’ll never want store-bought enchilada sauce after making this super easy, no-fuss homemade version!

Most of the recipes that you find here focus on quick and easy meals for the everyday home cook. But sometimes all the recipe planning in the world can’t prepare you for the kitchen fails that occur when your appliances seem to be working against you, not for you. The Best Peach Mango Salsa. The Best Peach Mango Salsa. Wegański blog kulinarny z przepisami kuchni wegańskiej 4 wegany i pies » Wegańskie kotlety z kaszy jaglanej, marchewka z groszkiem, sos z pieczarek – wegański obiad tradycyjny. Parmesan Zucchini Sticks Recipe. 20 minute oven roasted zucchini that are low in carbs, fat & calories. And did I mention they are delicious?! Connoisseurus Veg: Mediterranean Pan-Fried Pita Salad. My vegetable garden is doing great! Food - Recipes : Whole eggs in coconut masala (egg molee)

Mango Strawberry Sangria. One of my favorite things about warm weather is that it makes a wonderful excuse for fruity cocktail sipping.