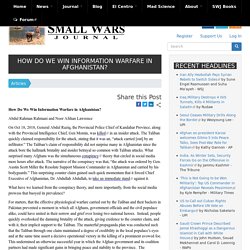 Is NATO Really Ready for a War? When Jürgen Bornemann was a junior army officer in West Germany’s Bundeswehr, he spent many months of every year practicing getting his unit from its base to likely conflict zones near West Germany’s border with East Germany. 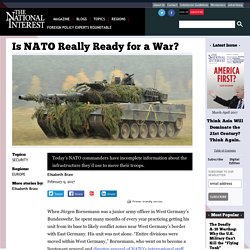 His unit was not alone. “Entire divisions were moved within West Germany,” Bornemann, who went on to become a lieutenant general and director general of NATO’s international staff, told me. (A division consists of some fifteen thousand soldiers.) Practicing movements involving tens of thousands of troops towards potential hot spots was, in fact, a main component of NATO’s Cold War defense planning. “NATO was constantly practicing, fine-tuning deploying fifty thousand troops across the Atlantic and moving them across Europe,” said Ian Brzezinski, an assistant secretary of defense under George W. US Army Looks Into Its Crystal Ball: How Will Enemies of the Future Strike? Army acquisition leaders and weapons developers are increasing their thinking about how future enemies might attack -- and looking for weaknesses and vulnerabilities in their platforms and technologies earlier in the developmental process, senior service leaders told Scout Warrior. 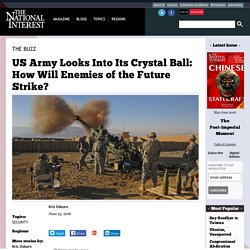 The idea is to think like an enemy trying to defeat and/or out-maneuver U.S. Army weapons, vehicles, sensors and protective technologies in order to better determine how these systems might be vulnerable when employed, Mary Miller, Deputy Assistant Secretary, Research and Technology, told Scout Warrior in an interview. The goal of this thinking, she explained, is to identify “fixes” or design alternatives to further harden a weapons system before it is fielded and faces contact with an enemy. “We have taken it upon ourselves to look at early developmental systems for potential vulnerabilities.

Businessinsider. The Swedish state security police, or SAPO, is getting pretty worried about a dramatic uptick in Russian espionage activity in Sweden, according to leaks in the Swedish press. 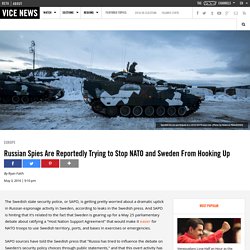 And SAPO is hinting that it's related to the fact that Sweden is gearing up for a May 25 parliamentary debate about ratifying a "Host Nation Support Agreement" that would make it easier for NATO troops to use Swedish territory, ports, and bases in exercises or emergencies. Why Is America So Bad at Promoting Democracy in Other Countries? If you’re a dedicated Wilsonian, the past quarter-century must have been pretty discouraging. 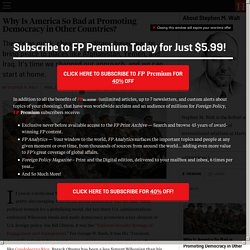 Convinced liberal democracy was the only viable political formula for a globalizing world, the last three U.S. administrations embraced Wilsonian ideals and made democracy promotion a key element of U.S. foreign policy. For Bill Clinton, it was the “National Security Strategy of Engagement and Enlargement.” For George W. Pentagon: 20,300 Troops Sexually Assaulted or Harassed in 2014. For the second year in a row, the Defense Department reports that more men than women suffered sexual assault in the military in 2014, a surprising wrinkle for a Pentagon struggling to get a handle on an epidemic that has sparked fury on Capitol Hill and among the public.

The department estimates that a total of 20,300 service members — 10,600 men and 9,600 women – were sexually assaulted or were the victims of what the department calls “unwanted sexual contact” during the course of the year. The military said that a total of 6,131 people reported being assaulted in 2014, which marks an 11 percent increase over 2013 and a staggering 70 percent leap over 2012. Leaders say those numbers show that servicemembers are more comfortable reporting these incidents than they had been in the past. In a memo to Pentagon leaders, Defense Secretary Ashton Carter wrote that “despite our efforts to date, our fight against sexual assault is far from over. Dr. Photo credit: Win McNamee/Getty Images. Last Look: Reinstating the draft - CNN Video. The Tragedy of the American Military. In mid-September, while President Obama was fending off complaints that he should have done more, done less, or done something different about the overlapping crises in Iraq and Syria, he traveled to Central Command headquarters, at MacDill Air Force Base in Florida. 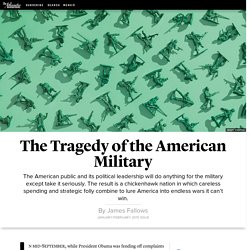 There he addressed some of the men and women who would implement whatever the U.S. military strategy turned out to be. The part of the speech intended to get coverage was Obama’s rationale for reengaging the United States in Iraq, more than a decade after it first invaded and following the long and painful effort to extricate itself.

This was big enough news that many cable channels covered the speech live. Gun Trouble. The rifle that today's infantry uses is little changed since the 1960s—and it is badly flawed. 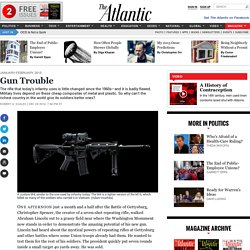 Military lives depend on these cheap composites of metal and plastic.