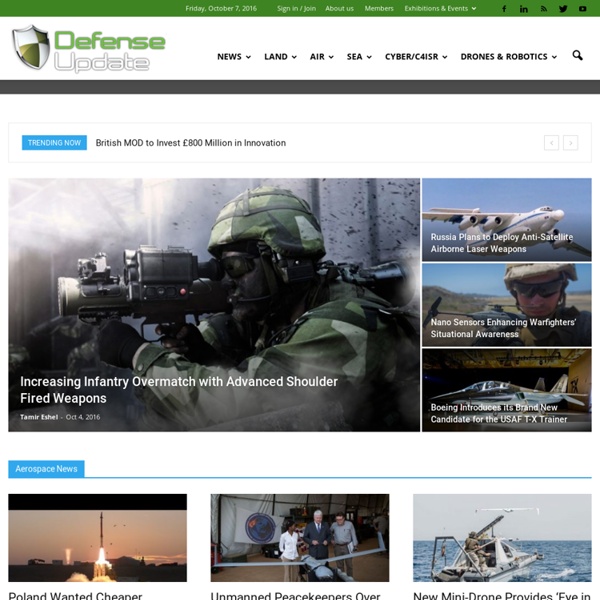 Daily defense news for military procurement managers, contractors, policy makers. Sea National Harbor, Md. — The Navy is modernizing its arsenal of Trident II D5 nuclear missiles in order to ensure their service life can extend for 25 more years aboard the Navy’s nuclear ballistic missile submarine fleet, service leaders said. The 44-foot long submarine-launched missiles have been serving on Ohio-class submarines for 25 years, Vice […] Tagged as: Navy, Ohio Replacement Program, Trident II D5 The Pentagon may not escape the crippling budget cuts on the horizon, but that isn’t stopping the Navy’s top admiral from talking up the sea service’s future weapon programs. “We have got to better match our mission and tailor our platforms to the missions as to what they carry,” Chief of Naval Operations Admiral Jonathan […] One of the drawbacks of the Marines’ MV-22 Osprey has been its inability to take aboard an all-terrain, multi-role combat vehicle and deliver it to the fight. Tagged as: ACV, EFV, Marine Corps

Terrorist Groups Terrorist Groups The organizational structure of a group determines its strengths and weaknesses. A general knowledge of the prevalent models of terrorist organizations leads to a better understanding of their capabilities. Knowledge of the different labels and systems of classification that have been applied to groups and individuals aid us in discarding useless or irrelevant terms, and in understanding the purposes and usefulness of different terminologies. In recent times, the popular image of a terrorist group operating according to a specific political agenda and motivated by ideology or the desire for ethnic or national liberation dominated our understanding of terrorism. There are two general categories of organization; hierarchical and networked. Terrorist groups that are associated with a political activity or organization will often require a more hierarchical structure, in order to coordinate terrorist violence with political action. • Categories of Terrorist Groups

The Golden Age of Special Operations Globalizing the “Global War on Terror.” This article originally appeared at TomDispatch.com. To stay on top of important articles like these, sign up to receive the latest updates from TomDispatch.com. To listen to Timothy MacBain’s latest Tomcast audio interview in which Bacevich discusses what we don’t know about special operations forces, click here or download it to your iPod here. As he campaigns for re-election, President Obama periodically reminds audiences of his success in terminating the deeply unpopular Iraq War. With fingers crossed for luck, he vows to do the same with the equally unpopular war in Afghanistan. About the Author Andrew J. Andrew J. Also by the Author The New York Times and Washington Post are both guilty of attacking this timeless straw man. Yet when it comes to military policy, the Obama administration’s success in shutting down wars conducted in plain sight tells only half the story, and the lesser half at that. John F. Goodbye, accountability.

Reliable Security Information International Assessment and Strategy Center > Research > China Sows The Whirlwind: Implications of Hezbollah’s Iranian-Chinese Weapons Home Research Email this article Print this article by Richard Fisher, Jr. Published on July 26th, 2006 ARTICLES Israel has been surprised and dismayed in the last few weeks by the unexpectedly high quality of Hezbollah munitions, most notably rockets and missiles. Iran’s ability to produce thousands of shorter-range "Katyusha" size or slightly larger artillery-size rockets that its proxy Hezbollah has used to rain down on Israel since July 12, 2006 is largely owed to Russian and North Korean technology transfers, Chinese technologies are probably involved as well. Without a doubt, however, the July 14 near-catastrophic attack against the modern and stealthy Israeli corvette Hanit would not have been possible without the C-802//Noor anti-ship missile, the means to produce which were sold by China to Iran in the mid-1990s. Through Hezbollah, Iran has only unleashed a small taste of its Chinese-aided arsenal. A broad pattern Quite the opposite. C-802 Surprise Longer Range Cruise Missiles