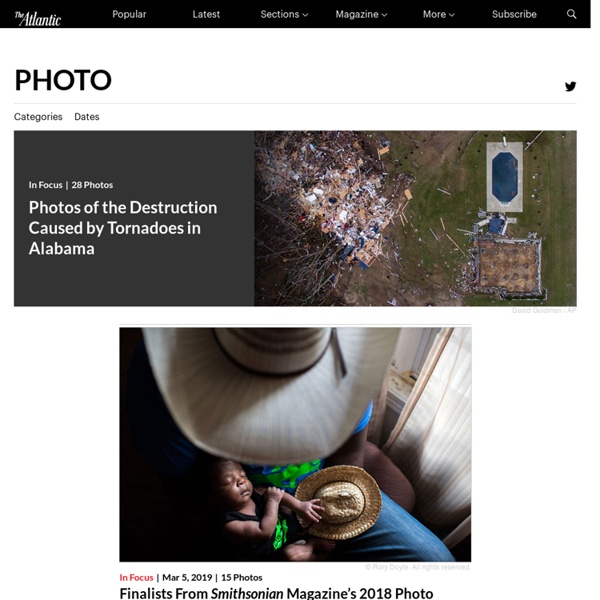 National Geographic Magazine’s annual photo contest is still open, but the deadline for submissions coming up on November 16, 2015. Photojournalist Louie Palu spent five years covering the war in Afghanistan, from 2006 to 2010, and has released a new documentary film titled Kandahar Journals, based on his writings and experience as a combat photographer. “Tilbakeblikk” is the name of a joint project between the Norwegian Forest and Landscape Institute and Norsk Folkemuseum. The project uses photographs taken of the same places separated by long periods of time to illustrate landscape changes in Norway. Images of people parading, trick-or-treating, partying, or getting scared silly in haunted houses, dressed in spooky or whimsical costumes—from the U.S., China, Germany, Spain, Japan, France, and more. Photographer Karen Marshall began photographing a group of girls in 1985—and hasn’t stopped.

40 maps that explain World War II by Timothy B. Lee on November 13, 2014 World War II was a great tragedy, claiming 60 million lives and throwing millions more into turmoil. Yet the war also spurred rapid technological development, hastened the end of colonialism, and laid the foundation for institutions like the United Nations and the European Union. Here are 42 maps that explain the conflict — how it started, why the Allies won, and how it has shaped the modern world. Background

National Geographic Photo Contest 2011 - Alan Taylor - In Focus National Geographic is currently holding its annual photo contest, with the deadline for submissions coming up on November 30. For the past nine weeks, the society has been gathering and presenting galleries of submissions, encouraging readers to vote for them as well. National Geographic was kind enough to let me choose among its entries from 2011 for display here on In Focus. Gathered below are 45 images from the three categories of People, Places, and Nature, with captions written by the individual photographers. [45 photos] Use j/k keys or ←/→ to navigate Choose: Many people pilgrimage to Uluru, but what is seen there often depends on where you've come from. Soldiers of the First World War - CEF Enlist! New Names in Canadian History.Source Introduction Over 600,000 men and women enlisted in the Canadian Expeditionary Force (CEF) during the First World War (1914-1918) as soldiers, nurses and chaplains. The CEF database is an index to those service files, which are held by Library and Archives Canada.

What Nagasaki looked like before and after the bomb Three days after leveling the city of Hiroshima with a uranium atomic bomb known as a "Little Boy," the United States dropped the more menacing-sounding "Fat Man" over Nagasaki. It was Aug. 9, 1945. Some 40,000 to 80,000 people were killed, and much of the city was pulverized. Nuclear weapons would never again be used in warfare. This is what Nagasaki looked like 70 years ago, before the bomb fell: Nagasaki before the bomb fell.

12 Creative Family Portraits I thought we'd end the week with a collection of creative family portraits. Though the holidays are now officially over (and there's no more Christmas "photo" cards to be made), you can still take pictures of your family in any number of creative ways. We've rounded up 10 ideas that include everything from simply layering your family's hands to using a small chalkboard as a prop.

The Nazis' Forgotten Anti-Smoking Campaign - Tracy Brown Hamilton Nazi Germany’s well-known obsession with creating a master Aryan race led to many atrocities. But from these same sinister motives came research that may have had health benefits for the German people during World War II—studies on the dangers of smoking that led to the most advanced anti-tobacco campaign of its time. Unfortunately, the campaign was only concerned with protecting the health of Aryan Germans. “Nazi Germany was governed by a health-conscious political elite bent on European conquest and genocidal extermination,” writes Stanford researcher Robert Proctor in his book, The Nazi War on Cancer, “and tobacco at the time was viewed as one among many ‘threats’ to the health of the chosen folk.” In 1939, German scientist Franz Müller presented the first epidemiological study linking tobacco use and cancer. Research by German doctors also brought to light the harmful effects of secondhand smoke for the first time, and coined the term “passive smoking.”

22 Crazy Perspective Photos Taken With a GoPro Camera Chances are that if you're into extreme sports, you already know about GoPro, the company that makes small, wearable, waterproof and shockproof cameras. Founder Nick Woodman was inspired to start a company dedicated to adventure photography after a 2002 surfing trip to Australia. Hoping to capture incredible images, he soon discovered that high quality equipment could not be obtained for reasonable prices. Atomic vet recalls 1946 bomb tests — and dirty aftermath Video Project Crossroads was a series of two nuclear tests, Able and Baker, the first tests conducted at the Pacific Proving Ground, near the Bikini Atoll in the Marshall Islands. These were the fourth and fifth nuclear detonations in history. Matt Wisniewski combines old and new in his beautiful photo collages. Some people create images to make a statement. Others, like Matt Wisniewski, do it because it looks pretty. “It’s mostly just aesthetic,” explains the 21-year-old computer science student of his spectral photo collages. “Whatever looks nice, really.” Art for art’s sake is no new conceit.

The Late Movies: Disney Propaganda Cartoons During World War II, Disney created propaganda for the US government. The cartoons dealt with subjects as varied as income taxes, the daily life of Nazis, and military tactics. I've collected a sampling of the cartoons below, for your viewing pleasure and amazement -- be warned, some are pretty weird, and many contain offensive racial or cultural caricatures. Note that most (all?) of these are included in the DVD box set Disney on the Front Lines, if you're into this kind of thing.

Trees Cocooned in Webs After Flood Photograph courtesy Russell Watkins, U.K. Department for International Development Trees shrouded in ghostly cocoons line the edges of a submerged farm field in the Pakistani village of Sindh, where 2010's massive floods drove millions of spiders and possibly other insects into the trees to spin their webs. Dr. Seuss's World War II Political Propaganda Cartoons by Maria Popova “One-tenth of your income must go into War Bonds if you hope to defeat both the Axis and inflation!” Dr. Seuss (1904-1991) may be best-remembered for his irreverent rhymes and the timeless prescriptions for living embedded in them, but he was also a prolific maker of subversive secret art and the auteur of a naughty book for adults.