The F-35 is a turkey. GPS bullets are latest weapon for American police. 29 October 2013Last updated at 12:35 ET The bullet is used during car chases It sounds like something out of a James Bond movie - GPS bullets that can track the location of a suspect's car. 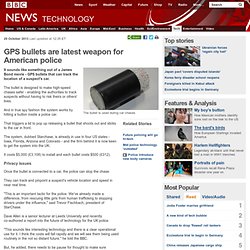 The bullet is designed to make high-speed chases safer - enabling the authorities to track suspects without having to risk theirs or others' lives. And in true spy fashion the system works by hitting a button inside a police car. That triggers a lid to pop up releasing a bullet that shoots out and sticks to the car in front. The system, dubbed Starchase, is already in use in four US states - Iowa, Florida, Arizona and Colorado - and the firm behind it is now keen to get the system into the UK. It costs $5,000 (£3,108) to install and each bullet costs $500 (£312). Privacy issues Once the bullet is connected to a car, the police can stop the chase.

They can track and pinpoint a suspect's vehicle location and speed in near real time. "This is an important tactic for the police. Empty F-16 jet tested by Boeing and US Air Force. 24 September 2013Last updated at 12:58 ET By Leo Kelion Technology reporter Test flight of the fighter jet controlled from the ground Boeing has revealed that it has retrofitted retired fighter jets to turn them into drones. 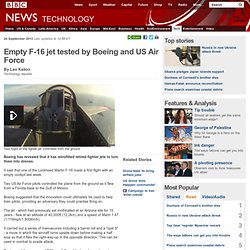 It said that one of the Lockheed Martin F-16 made a first flight with an empty cockpit last week. Two US Air Force pilots controlled the plane from the ground as it flew from a Florida base to the Gulf of Mexico. Boeing suggested that the innovation could ultimately be used to help train pilots, providing an adversary they could practise firing on. The jet - which had previously sat mothballed at an Arizona site for 15 years - flew at an altitude of 40,000ft (12.2km) and a speed of Mach 1.47 (1,119mph/1,800km/h). It carried out a series of manoeuvres including a barrel roll and a "split S" - a move in which the aircraft turns upside down before making a half loop so that it flies the right-way-up in the opposite direction. X-47B UCAS-D First Catapult Launch from USS George H.W. Bush (CVN-77) X-47B Completes First Carrier-based Arrested Landing (2) 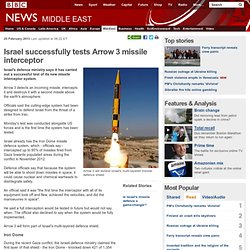 Arrow 3 detects an incoming missile, intercepts it and destroys it with a second missile above the earth's atmosphere. Officials said the cutting-edge system had been designed to defend Israel from the threat of a strike from Iran. Monday's test was conducted alongside US forces and is the first time the system has been tested. Israel already has the Iron Dome missile defence system, which - officials say - intercepted up to 85% of missiles fired from Gaza towards populated areas during the conflict in November 2012. Defence officials say that because the system will be able to shoot down missiles in space, it could cause nuclear and chemical warheads to disintegrate safely. He said a full interception would be tested in future but would not say when. Iron Dome. Darpa looks to use small ships as drone bases. 4 March 2013Last updated at 08:17 ET The US military is planning to use fleets of small ships as platforms for unmanned aircraft to land and take off. 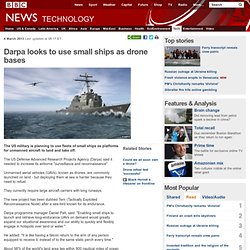 The US Defense Advanced Research Projects Agency (Darpa) said it needed to increase its airborne "surveillance and reconnaissance". Unmanned aerial vehicles (UAVs), known as drones, are commonly launched on land - but deploying them at sea is harder because they need to refuel. They currently require large aircraft carriers with long runways.

The new project has been dubbed Tern (Tactically Exploited Reconnaissance Node) after a sea-bird known for its endurance. Darpa programme manager Daniel Patt, said: "Enabling small ships to launch and retrieve long-endurance UAVs on demand would greatly expand our situational awareness and our ability to quickly and flexibly engage in hotspots over land or water. " He added: "It is like having a falcon return to the arm of any person equipped to receive it, instead of to the same static perch every time. "