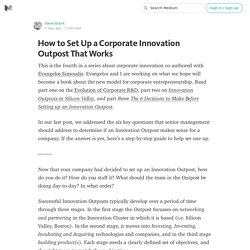 Evangelos and I are working on what we hope will become a book about the new model for corporate entrepreneurship. Read part one on the Evolution of Corporate R&D, part two on Innovation Outposts in Silicon Valley, and part three The 6 Decisions to Make Before Setting up an Innovation Outpost. In our last post, we addressed the six key questions that senior management should address to determine if an Innovation Outpost makes sense for a company. If the answer is yes, here’s a step-by-step guide to help set one up. How Do You Beat iPhone? — Backchannel.

How Do You Beat iPhone? 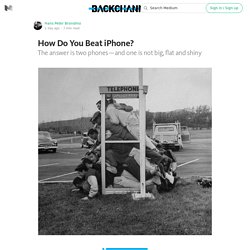 The answer is two phones — and one is not big, flat and shiny. The Snow Maiden of Slavic Folklore: Magical Characters of Winter from Russia. Ded Moroz, translated to (Grand)father Frost, or Old Man Frost, is a legendary Slavic character that makes his rounds every New Year’s Eve. 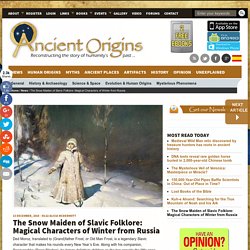 Along with his companion, Snegurochka (Snow Maiden), he brings delight to children as the two provide the little ones with gifts. The figure of Snow Maiden is one special addition that sets the story of Ded Moroz apart from similar winter holiday icons and is essential to many New Year’s celebrations. Characteristics and Origins of Snow Maiden Snegurochka (diminutive) or Snegurka, (Snow Maiden, Snow Girl, or Snowy in English) is a Russian character that is relatively new to Slavic fairy tales (when compared to her “godfather” Ded Moroz) - it was not until the early 19th century that she first appeared in folk legends.

'There’s a County Mounty at the Pickle Park,' and More Creative Trucker Slang. A truck driver uses a CB radio at the National Museum of American History. 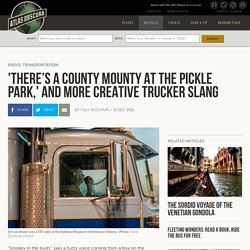 (Photo: Kārlis Dambrāns/flickr) "Smokey in the bush," says a fuzzy voice coming from a box on the dashboard. Any trucker sailing down Interstate 91 in New England would know the drill: press the brakes, slow down, and look for cops on the horizon. Such cryptic warnings, which come from other drivers nearby, are sent out over a radio frequency known as Citizens’ Band Radio, or CB Radio for short.

Over the last 70 years, dashboard CB devices have become ubiquitous among professional drivers, leading to truckers developing their own lingo for communication. Though there are now sleeker digital ways for drivers to navigate traffic hazards—such as the Waze cell phone app—CB Radio persists as an emblem of decentralized and uninhibited motorist dialogue. The Billionaire Battle in the Bahamas. Peter Nygard is a hard-partying retail tycoon, whose estate is fit for a Mayan emperor. 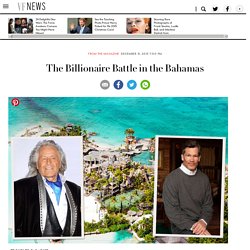 Louis Bacon is a buttoned-up hedge-fund king, whose passion is conservation. Both are locked in an eight-year legal war with each other that has turned each man’s paradise into hell. The whole thing began over a puddle in a driveway. The two men are next-door neighbors in Lyford Cay, a gated community on New Providence, an island in the Bahamas, and for years it had been a peaceful adjacency. Because both of them happen to be billionaires, it is a picturesque driveway, lined by casuarina trees and triple Alexander palms, 200 feet north of a stunning body of water known as Clifton Bay and 100 feet south of an even more stunning vista upon the Atlantic Ocean. Consciousness Wars.

The following is an excerpt from my new book, The Secret Teachers of the Western World. 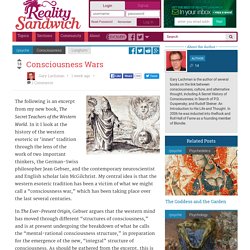 In it I look at the history of the western esoteric or ‘inner’ tradition through the lens of the work of two important thinkers, the German-Swiss philosopher Jean Gebser, and the contemporary neuroscientist and English scholar Iain McGilchrist. My central idea is that the western esoteric tradition has been a victim of what we might call a “consciousness war,” which has been taking place over the last several centuries. Mind Power: A Manifesto. From time to time I hear from old friends, and sometimes from strangers, wondering why I occupy myself with what they regard as “woo-woo” stuff – that is, New Thought and positive-mind metaphysics. 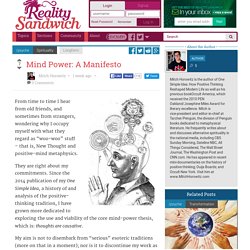 They are right about my commitments. Since the 2014 publication of my One Simple Idea, a history of and analysis of the positive-thinking tradition, I have grown more dedicated to exploring the use and viability of the core mind-power thesis, which is: thoughts are causative. My aim is not to disembark from “serious” esoteric traditions (more on that in a moment); nor is it to discontinue my work as a historian.

Rather, I am specifically interested in formulating a tough-minded, intellectually defensible, and useful distillation of New Thought ideas. But make no mistake: I am not interested in intellectualizing New Thought. I can say no such thing about many contemporary expressions of traditional or esoteric spiritual traditions. Autotelics: Who Are They? And Why You Might Be One. Overcoming The Addiction To Negativity In The Matrix. An addiction to negativity in the matrix overlaps the world. 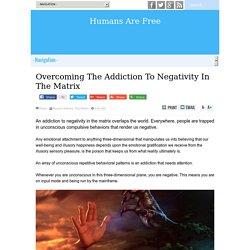 Everywhere, people are trapped in uncon... An addiction to negativity in the matrix overlaps the world. Everywhere, people are trapped in unconscious compulsive behaviors that render us negative. Any emotional attachment to anything three-dimensional that manipulates us into believing that our well-being and illusory happiness depends upon the emotional gratification we receive from the illusory sensory pleasure, is the poison that keeps us from what reality ultimately is. An array of unconscious repetitive behavioral patterns is an addiction that needs attention. Whenever you are unconscious in this three-dimensional plane, you are negative. Most of our actions, of using various forms and arrangements of letters, numbers, shapes and sounds to justify our experience here as real, are holding us in the unconscious negative state.