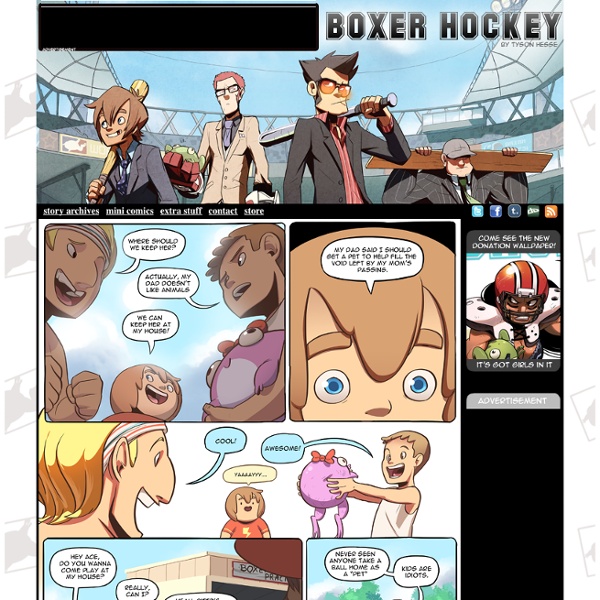 MS Paint Adventures introdoucing, 20104............ the NEWD YEAR Gigapause status: STILL GIGAPAUSED. It's almost over, right? Um, no, sorry. I still have no time estimate, or specific date I am shooting for. 4/13 would be the COOLEST date to shoot for, right?

Artifice - Title Page - Yaoi 911 Webcomics Artifice is a sci-fi comic written and published by me, Alex Woolfson. All the art is by the awesome and brilliant Winona Nelson. I hope you enjoy it! Some navigation tips: At the bottom of each comic, there is a navigation menu giving you the choice to go to the First, Previous, Next and Last pages. (Or if you’re feeling non-linear, there’s even a “Random” page option.)

Comics - Announcing Hiatus. 26 Jan 2012 11:00 am Average Rating: Rate this Comic: SpoonFace , 26 Jan 2012 09:43 am SUBNORMALITY! All content copyright Winston Rowntree, 2015. Museum previously seen here and then here. Cat toys these days To wet your appetite with the bonus story found in our new EC book, here's a sample page of the 8 page print-exclusive bonus story. We're pretty happy with the story, so we hope you'll like it! Also, the crossover between Magick Chicks and Eerie Cuties is in full swing. Be sure to visit both sites for twice the fun! Annnnd, if you're an artist/creator who'd be interested in contributing a guest comic for either Eerie Cuties or Magick Chicks, we're looking for comics or illustrations that we could run during the Xmas & New Year holidays.

The Young Protectors “Engaging The Enemy” is a multi-chapter arc in the superhero comic The Young Protectors written and published by me, Alex Woolfson. Pencils are by Adam DeKraker and colors are by Veronica Gandini. I very much hope you enjoy it! Some navigation tips: At the bottom of each comic, there is a navigation menu giving you the choice to go to the First, Previous, Next and Last pages. K.G.B. May 5th, 2010 ♥ by: Hwan Another week, another K.G.B.! Can you believe we are already at the end of Chapter 4!?! Next week will be the last chapter for the first season so BRACE YOURSELF! Korean! BEST FRIENDS FOREVER updates BFF updates in chunks (10-15 pages) whenever I finish the pages. I announce it on Twitter, Tumblr, and Facebook when I do! You can also subscribe to get email updates when there's new content for BFF. comic In Best Friends Forever, a newly-popular dirt-poor quarterback and the nerd-chic billionaire president of the student council try to hold their unlikely friendship together throughout their senior year of high school - despite the suspicions & meddling of their nosy (and often frustrating) schoolmates.

Todd Allison & the Petunia Violet Manga RELEASED:Apr 19, 2011 LAST UPDATED:Apr 19, 2011 BLANKS STATUS:Missing (28 of 28) Petunia delivers a letter for Todd Allison and she thinks about how mysterious he is. Embarrassing things ensue. Also, there was a bombing in town. Berserk Manga - Read Berserk Summary Guts, known as the Black Swordsman, seeks sanctuary from the demonic forces attracted to him and his woman because of a demonic mark on their necks, and also vengeance against the man who branded him as an unholy sacrifice. Aided only by his titanic strength gained from a harsh childhood lived with mercenaries, a gigantic sword, and an iron prosthetic left hand, Guts must struggle against his bleak destiny, all the while fighting with a rage that might strip him of his humanity.