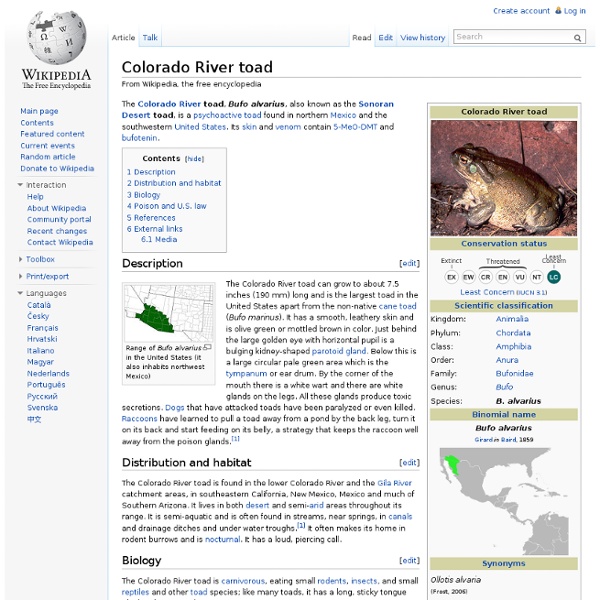 Description[edit] Range of Incilius alvarius in the United States (it also inhabits northwest Mexico) The Colorado River toad can grow to about 7.5 inches (190 mm) long and is the largest toad in the United States apart from the non-native cane toad (Rhinella marina). It has a smooth, leathery skin and is olive green or mottled brown in color. Just behind the large golden eye with horizontal pupil is a bulging kidney-shaped parotoid gland. Below this is a large circular pale green area which is the tympanum or ear drum. Distribution and habitat[edit] The Colorado River toad is found in the lower Colorado River and the Gila River catchment areas, in southeastern California, New Mexico, Mexico and much of southern Arizona. Biology[edit] The Colorado River toad is carnivorous, eating small rodents, insects, and small reptiles and other toad species; like many toads, it has a long, sticky tongue which aids it in catching prey. Drug use of poision[edit] Ethic[edit] State laws[edit] References[edit]

Science Says: Lungs Love Weed Breathe easy, tokers. Smoking marijuana in moderate amounts may not be so bad for your lungs, after all. A new study, published in this month's Journal of the American Medical Association, tested the lung function of over 5,000 young adults between 18 and 30 to determine marijuana's effect on lungs. In fact, researchers were surprised to find marijuana smokers performed slightly better than both smokers and non-smokers on the lung performance test. MORE: 5 Reasons Not to Smoke Synthetic Weed For most of human existence, cannabis has been considered a medicine. "What's interesting is if you look at origins of the marijuana prohibition in this country, it coincides with a rise in anti-immigrant sentiment. . . really since the early years of this century, the war on marijuana has been much more a war on the sort of people who smoke it, be they Mexicans or blacks or jazz musicians or beatniks or hippies or hip-hop artists. Attitudes are changing, however.

Smoking Pot Doesn't Cause Lung Cancer The largest study ever conducted on marijuana’s relevance to lung cancer has come up with some somewhat surprising results. The National Institutes of Health’s National Institute on Drug Abuse funded the University of California at Los Angeles study, which found that smoking marijuana does not cause lung cancer, and it doesn’t seem to matter how much or how often it is smoked. Donald Tashkin, a pulmonologist at UCLA, has studied marijuana for 30 years. Furthermore, Tashkin’s work has previously established a tenuous link between marijuana smoking and negative health effects. For example, he found that marijuana tar contained higher concentrations of cancer-causing substances, and because of that and the fact that marijuana smokers hold smoke deep in their lungs for an extended period of time, it previously seemed likely that the health effects of prolonged exposure would become increasingly damaging:

Cannabis seeds species genetic origins and history of marijuana strains Although thousands of hybridized cannabis seeds varieties have been created by enthusiastic home and professional seed breeders, the fundamental genetic stock of traditional cannabis seeds strains is well-known and respected. Consider strains presented here the basic colour palette from which breeders mix and combine to create limitless diversity of new cannabis strains. Base origins and history of cannabis strains: Columbian aka Gold: It was one of the original sativa strains imported, that fueled the sixties marijuana renaissance in North America. Thai: sometimes called Thai Sticks by the Vietnam veterans, this Asian sativa variety produces loose clusters which are often woven onto sticks of bamboo or cannabis stems. Jamaican: these mostly sativa plants are fast-growing, known to produce a stimulating, up high. Mexican: Some of the best cannabis used to come from Mexico, but these days "Mexican Brickweed" has become synonymous with "schwag", the lowest quality smoke. Price: € 35.00

How Hemp Got High If Genome Biology had been launched today, instead of 11 years ago, it might well have been given the alternative title of "Transcriptome Biology". While Genome Biology captured the millennial zeitgeist of genomics brought about by the project(s) to sequence the human genome, the breathtaking progress of this field in the intervening decade has brought us to a new frontier: the transcriptome. The development of RNA-seq, which applies high-throughput next-generation sequencing technology to cDNA generated from RNA samples, has resulted in an explosion of transcriptome sequences. Not only does RNA-seq benefit from higher sensitivity than microarrays, it also does not require the a priori knowledge needed for constructing chips; this flexibility has infused the transcriptome explosion with a biologically diverse character and encompassed many species not well covered by commercially available microarrays.

Cannabis Cures Cancer Researchers have now found that the compound, called cannabidiol, has the ability to ‘switch off’ the gene responsible for metastasis in an aggressive form of breast cancer. Importantly, this substance does not produce the psychoactive properties of the cannabis plant. A team from the California Pacific Medical Center, in San Francisco, first spotted its potential five years ago, after it stopped the proliferation of human breast cancer cells in the lab. Another Spanish team, led by Dr Manuel Guzmon, wanted to see whether they could prevent a form of cancer (glioblastoma multiforme) from growing by cutting off its blood supply. The mice were given a cancer similar to the human brain cancer (glioblastoma multiforme). Cannabinoids halt VEGF production by producing Ceramide. Dr Guzmon said: “As far as we know, this is the first report showing that ceramide depresses VEGF pathway by interfering with VEGF production.” They then wanted to see if this would also happen with humans. Related Posts

Antique Cannabis Book / A Price Guide to Antiques "Cannabis Chassidis" Book Party with Yoseph Leib ibn Mardachya, New York City, Sept. 12, 2012 | InterActivist Info Exchange "Cannabis Chassidis: The Ancient and Emerging Torah of Drugs" Book Presentation with author Yoseph Leib ibn Mardachya 7PM, Wednesday, Sept. 12, 2012 Bluestockings Bookstore 172 Allen Street New York City, NY Is marijuana kosher? Is Marijuana Kosher? Yes, of course it is! Join Yoseph Leib on his travels and studies throughout Jerusalem, New York, and Rainbow Country, USA in search of guidance about how Cannabis and psychedelics have and have not been used in both ancient and emerging Chassidic traditions, and what the way we have related to our desires for medicines, gods and intoxicants can teach us about how we relate to ourselves, our community, and our G-d. Chassidis (“kind-ness”) means the way to do all the things we love doing, better, as if any other way was acceptable. But this book is not just for the Jews, or the Stoners. “An enthusiastic and interesting excursion into the psychedelic fringes of hasidic culture.” — Alan Moore, author, V for Vendetta, Watchmen

Why I Want My Kids To Smoke Weed Taboos are not easily shed. To many people, hoping that your kids smoke weed is as twisted and disconcerting as damning your unborn child to hell. It has a malicious and juvenile ring to it, sliding off the tongue, dripping in innuendos and scathing connotations, the way a curse comes out the first time a 12-year-old gets feisty enough to fire it. Contrary to the uneasy 12-year-old, this declaration isn’t made in malice, foolery or for attention. It’s a simple statement, one said in passing only to think about more seriously in the confines of my apartment. In the way I hope they’ll like books and black olives? Let me be clear that I do not hope my kids are just going to smoke weed all day and be potheads, but am rather advocating that if they are going to indulge in any type of illicit activity that seems to come with adulthood (like having wine with dinner), it’s towards the side of marijuana, and not booze. Then I hope they read books and listen to music. They will welcome change.