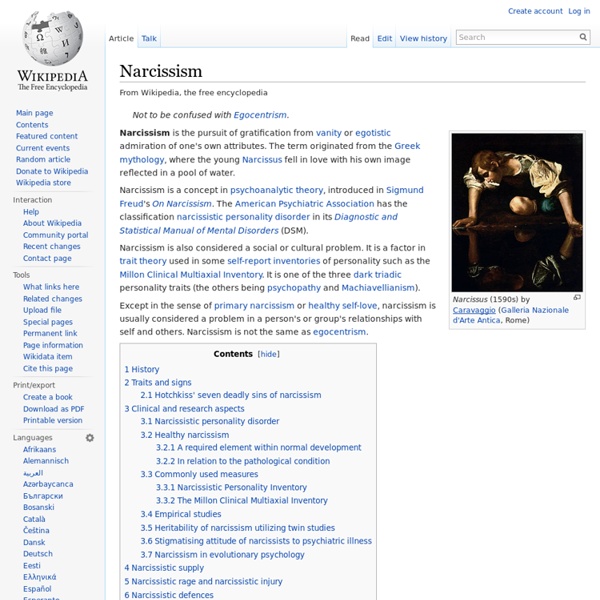 Narcissism is a concept in psychoanalytic theory, introduced in Sigmund Freud's On Narcissism. The American Psychiatric Association has the classification narcissistic personality disorder in its Diagnostic and Statistical Manual of Mental Disorders (DSM). Narcissism is also considered a social or cultural problem. It is a factor in trait theory used in some self-report inventories of personality such as the Millon Clinical Multiaxial Inventory. It is one of the three dark triadic personality traits (the others being psychopathy and Machiavellianism). Except in the sense of primary narcissism or healthy self-love, narcissism is usually considered a problem in a person's or group's relationships with self and others. History[edit] The concept of excessive selfishness has been recognized throughout history. Traits and signs[edit] Life is a stage, and when the curtain falls upon an act, it is finished and forgotten. Hotchkiss' seven deadly sins of narcissism[edit] Healthy narcissism[edit]

Narcissus (mythology) Narcissus by Caravaggio depicts Narcissus gazing at his own reflection. Тhe myth of Narcissus has inspired artists for at least two thousand years, even before the Roman poet Ovid featured a version in book III of his Metamorphoses. This was followed in more recent centuries by other poets (e.g. Keats and Alfred Edward Housman) and painters (Caravaggio, Poussin, Turner, Dalí (see Metamorphosis of Narcissus), and Waterhouse). In Stendhal's novel Le Rouge et le Noir (1830), there is a classic narcissist in the character of Mathilde. She looks at herself instead of looking at you, and so doesn't know you.During the two or three little outbursts of passion she has allowed herself in your favor, she has, by a great effort of imagination, seen in you the hero of her dreams, and not yourself as you really are. Author and poet Rainer Maria Rilke visits the character and symbolism of Narcissus in several of his poems. "To stare, big-eyed Narcissus, into some spring Is beneath all adult dignity."

On the difference between science and philosophy Attentive readers of this blog may have noticed that those who post comments to my entries often show two interesting and complementary attitudes: a fundamental distrust of (if not downright contempt for) philosophy , coupled with an overly enthusiastic endorsement of science. Take, for instance, my recurring argument that some (but not all!) of the “new atheists” engage in scientistic attitudes by overplaying the epistemological power of science while downplaying (or even simply negating) the notion that science fundamentally depends on non-empirical (i.e., philosophical) assumptions to even get started. It is perhaps appropriate to tackle the problem at the end of 2009, the year that marks not just the 150th anniversary of Charles Darwin’s Origin of Species (and the 150th anniversary of the publication of the arguably even more momentous On Liberty by John Stuart Mill), but also the 50th anniversary of C.P. Philosophy, on the other hand, is much harder to define .

ICBS Everywhere › Narcissism + Incompetence = Ignorance and More Incompetence Last month I attended the Annual Convention of the Western Psychological Association (WPA), at which two of my students were scheduled to present research. I will spare you the five-page (single-spaced) description of my peril-fraught journey to Cancun and the disappointment of losing the posters along the way and just tell you that I am very proud of how my students handled it. Totally unrelated lizard image. If you close your eyes, you might be able to imagine a beautiful poster with a couple of people standing in front of it. However, instead of our ugly makeshift poster, you can look at a great shot of an iguana that my co-author Dylan Keenberg took on our excursion to Tulum. Now for the science. In my experience, most teachers, particularly college instructors, believe that entitlement attitudes, student expectations, study strategies, work habits, and aptitude have changed dramatically in recent years. Our measures: In addition: References: Anchacoso, M.V. (2006).

5 Most Common Regrets of the Dying It is very rare for HE to repost content from other websites, but this one cannot afford to be missed for originality’s sake. Bronnie Ware spent her life working with elderly people who were close to death. In this thought-provoking piece, she pieces together the most common regrets of the hundreds of people she stayed with until the end. The implications of these insights are incredibly vast and sobering. 1. I wish I’d had the courage to live a life true to myself, not the life others expected of me. This was the most common regret of all. It is very important to try and honour at least some of your dreams along the way. 2. This came from every male patient that I nursed. By simplifying your lifestyle and making conscious choices along the way, it is possible to not need the income that you think you do. 3. Many people suppressed their feelings in order to keep peace with others. We cannot control the reactions of others. 4. 5. This is a surprisingly common one.

What You'll Wish You'd Known January 2005 (I wrote this talk for a high school. I never actually gave it, because the school authorities vetoed the plan to invite me.) When I said I was speaking at a high school, my friends were curious. What will you say to high school students? So I asked them, what do you wish someone had told you in high school? I'll start by telling you something you don't have to know in high school: what you want to do with your life. If I were back in high school and someone asked about my plans, I'd say that my first priority was to learn what the options were. It might seem that nothing would be easier than deciding what you like, but it turns out to be hard, partly because it's hard to get an accurate picture of most jobs. But there are other jobs you can't learn about, because no one is doing them yet. And yet every May, speakers all over the country fire up the Standard Graduation Speech, the theme of which is: don't give up on your dreams. Which is an uncomfortable thought. Upwind Now

Narcissism on Facebook In normal every day life with face to face contact the physical characteristics and knowledge about social background form the identity of your contact. It’s stable and three dimensional. You know that person, it’s therefor very difficult for the other to claim another identity or create impressions inconsistent with how you know him or her. Online identity is a different topic. 10 Myths About Introverts || CarlKingCreative.com || Los Angeles, CA 10 Myths About Introverts By Carl King [ Translations: Spanish | German | Dutch | Italian ] I wrote this list in late-2008. Around that time, I was lucky enough to discover a book called, The Introvert Advantage: How to Thrive in an Extrovert World , by Marti Laney, Psy.D. Sure, anyone who knows me would say, “Duh! A section of Laney’s book (page 71 through page 75) maps out the human brain and explains how neuro-transmitters follow different dominant paths in the nervous systems of Introverts and Extroverts. Unfortunately, according to the book, only about 25% of people are Introverts. So here are a few common misconceptions about Introverts (not taken directly from the book, but based on my own life experience): Myth #1 – Introverts don’t like to talk. Myth #2 – Introverts are shy. Myth #3 – Introverts are rude. Myth #4 – Introverts don’t like people. Myth #5 – Introverts don’t like to go out in public. Myth #6 – Introverts always want to be alone. Myth #7 – Introverts are weird. -Carl.

The Metamorphoses of Ovid by Publius Ovidius Naso rocks. Cadmus, afflicted at this fresh calamity, retires from Thebes, and flies to Illyria, together with his wife, where they are both transformed into serpents. Of those who despise Bacchus, Acrisius alone remains, the grandfather of Perseus, who, having cut off the head of the Gorgon Medusa, serpents are produced by her blood. Perseus turns Atlas into a mountain, and having liberated Andromeda, he changes sea-weed into coral, and afterwards marries her. A tumult arising during the celebration of the nuptials, Phineus claims Andromeda, who has been betrothed to him; and together with Proetus, he and Polydectes are turned into stone. An Essay by Einstein -- The World As I See It "How strange is the lot of us mortals! Each of us is here for a brief sojourn; for what purpose he knows not, though he sometimes thinks he senses it. But without deeper reflection one knows from daily life that one exists for other people -- first of all for those upon whose smiles and well-being our own happiness is wholly dependent, and then for the many, unknown to us, to whose destinies we are bound by the ties of sympathy. "I have never looked upon ease and happiness as ends in themselves -- this critical basis I call the ideal of a pigsty. "My passionate sense of social justice and social responsibility has always contrasted oddly with my pronounced lack of need for direct contact with other human beings and human communities. "My political ideal is democracy. "This topic brings me to that worst outcrop of herd life, the military system, which I abhor... "The most beautiful experience we can have is the mysterious. See also Einstein's Third Paradise, an essay by Gerald Holton

Buy species daffodil - The Tenby daffodil Narcissus obvallaris: Delivery by Crocus.co.uk Bulb blindness Bulbs produce lovely foliage but no flowers. Either no buds at all appear or those that do are dry and virtually empty of petals. Daffodils (Narcissi) are usually the worst affects, especially multi-headed or double forms. Read full article Plant spring bulbs Spring bulbs, such as daffodils and hyacinths, can be planted whenever the soil conditions allow. Read full article Planting bulbs Bulbs are ideal for anyone who rates themselves as 'keen-but-clueless' because they are one of the easiest plants to grow. Read full article Simple but stylish protection If rabbits, deer, squirrels or cats devour or scratch up your plants these wire mesh protectors will give them time to get established. Read full article Plan ahead with bulbs One of the great things about gardening is being able to look into the future with enthusiasm, and part of that is planting now for next spring. Read full article Naturalising Narcissus bulbs in grass Read full article