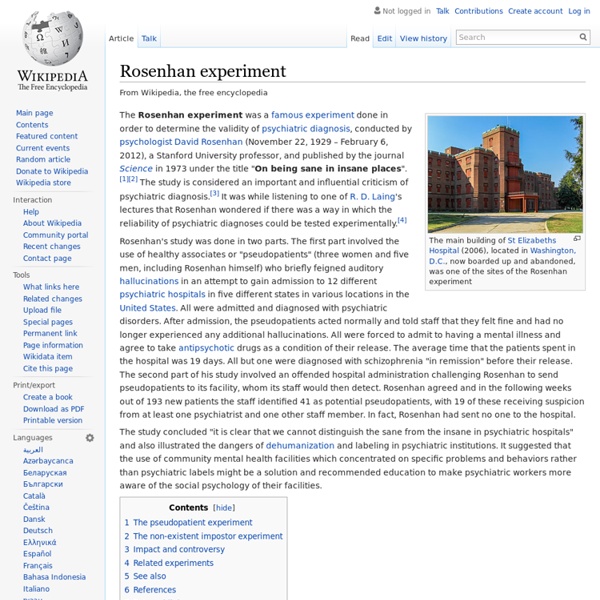 Rosenhan's study was done in two parts. The first part involved the use of healthy associates or "pseudopatients" (three women and five men, including Rosenhan himself) who briefly feigned auditory hallucinations in an attempt to gain admission to 12 different psychiatric hospitals in five different states in various locations in the United States. All were admitted and diagnosed with psychiatric disorders. After admission, the pseudopatients acted normally and told staff that they felt fine and had no longer experienced any additional hallucinations. All were forced to admit to having a mental illness and agree to take antipsychotic drugs as a condition of their release. The average time that the patients spent in the hospital was 19 days. The study concluded "it is clear that we cannot distinguish the sane from the insane in psychiatric hospitals" and also illustrated the dangers of dehumanization and labeling in psychiatric institutions. The pseudopatient experiment[edit] Notes

Seat’s Taken! A Study of Antisocial Traveler Behavior Remember the last time you got on a train, only to find all the seats occupied by people … and their bags? Boy, bags really do like aisle seats, you may have said to yourself. Or maybe you just shook your head and moved on to the next car, annoyed by the passive-aggressiveness of it all: “Seat’s taken!” the bags scream in silence, while their owners turn and stare out the windows. You might deplore such behavior when you’re the one schlepping down the aisle in search of an open seat, but admit it, you’re probably guilty of piling your suitcase next to you too, when you’re the first on board. The fine dopamine line between creativity and schizophrenia New research shows a possible explanation for the link between mental health and creativity. By studying receptors in the brain, researchers at the Swedish medical university Karolinska Institutet have managed to show that the dopamine system in healthy, highly creative people is similar in some respects to that seen in people with schizophrenia. High creative skills have been shown to be somewhat more common in people who have mental illness in the family. Creativity is also linked to a slightly higher risk of schizophrenia and bipolar disorder. Certain psychological traits, such as the ability to make unusual pr bizarre associations are also shared by schizophrenics and healthy, highly creative people.

7 Helpful Tips To Immediately Increase Your Confidence Your rating: None Average: 3.7 (6 votes) 1.) Ask yourself, “What’s the worst that could happen?” Too often, we place excess importance on potential problems. HowStuffWorks "The Basics of C Programming" The previous discussion becomes a little clearer if you understand how memory addresses work in a computer's hardware. If you have not read it already, now would be a good time to read How Bits and Bytes Work to fully understand bits, bytes and words. All computers have memory, also known as RAM (random access memory). For example, your computer might have 16 or 32 or 64 megabytes of RAM installed right now. RAM holds the programs that your computer is currently running along with the data they are currently manipulating (their variables and data structures).

15 Cute Animals That Will Cause You Horrible Harm When we think of animals that will destroy us, rend us limb from limb, and leave us in a bloody mess, we usually thing of the huge and horrifying. Which means we forget about the real threats: the tiny, the cute, the gorgeous. The animals at which we ooh and aaah over, but are deadly, poisonous and generally all around nasty. And, after writing this list, I've come up with two pieces of advice. 1) Never go in the water. 2) Never visit Australia. Combine the two, and it's even more true: never go in the water in Australia! Seriously, terrifyingly deadly critters everywhere.

10 Practical Uses For Psychological Research in Everyday Life People love to give each other advice. The web is full to bursting with all types of pseudo-psychological advice about life. The problem is, how much of this is based on real scientific evidence? Well, here on PsyBlog we’ve got the scientific evidence. So here’s my top 10 list of what you can learn practically from the psychological research discussed here recently. Dreams: Night School The Dream Robbers What happens when a rat stops dreaming ? In 2004, researchers at the University of Wisconsin at Madison decided to find out. Their method was simple, if a bit devilish. Step 1: Strand a rat in a tub of water.