A Drug That Could Give You Perfect Visual Memory 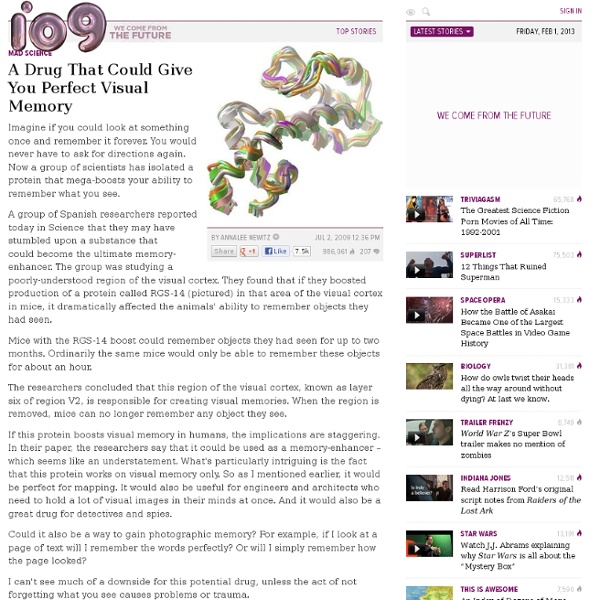 This new drug does sound quite amazing. Although the brain is capable of holding so much information already. We can hold a lot more information that we think, just be training ourselves and not relying on drugs. The whole, "we only use 10% of our brain" or whatever is just a myth. We actually use most of our brain most of the time, it just takes so much energy and we use different parts at different times, as I'm sure you're all aware. Now those of you that have Photographic Memories, I'm quite envious of you.

To make memories, new neurons must erase older ones Short-term memory may depend in a surprising way on the ability of newly formed neurons to erase older connections. That's the conclusion of a report in the November 13th issue of the journal Cell, a Cell Press publication, that provides some of the first evidence in mice and rats that new neurons sprouted in the hippocampus cause the decay of short-term fear memories in that brain region, without an overall memory loss. The researchers led by Kaoru Inokuchi of The University of Toyama in Japan say the discovery shows a more important role than many would have anticipated for the erasure of memories. They propose that the birth of new neurons promotes the gradual loss of memory traces from the hippocampus as those memories are transferred elsewhere in the brain for permanent storage. Although they examined this process only in the context of fear memory, Inokuchi says he "thinks all memories that are initially stored in the hippocampus are influenced by this process."

The Citizen Online National 5.5.2014 05.00 pm FILE PICTURE: An IEC official scans a green bar coded ID book at a voter registration center in Melville, Johannesburg, 10 November 2013. Picture: Tracy lee Stark The home affairs department has extended its office hours in the lead-up to and on election day, it said on Monday. The department would open all of its offices across the country on Wednesday from 7am to 9pm in line with voting hours to assist citizens with the voting process, spokesman Lunga Ngqengelele said in a statement. It had already extended its office hours for Monday and Tuesday, from 7.30am to 7.30pm.

Artist Takes Every Drug Known to Man & Draws This is all kinds of cool, and everything your mother told you not to do. Bryan Lewis Saunders is an artist from Washington D.C., not just any artist though. Saunders prefers to take a more unconventional approach to his artwork. Protein that destroys HIV discovered Loyola University researchers have identified the key components of a protein called TRIM5a that destroys HIV in rhesus monkeys. The finding could lead to new TRIM5a-based treatments that would knock out HIV in humans, said senior researcher Edward M. Campbell, PhD, of Loyola University Health System. Campbell and colleagues report their findings in an article featured on the cover of the Sept. 15, 2010 issue of the journal Virology, now available online. In 2004, other researchers reported that TRIM5a protects rhesus monkeys from HIV. The TRIM5a protein first latches on to a HIV virus, then other TRIM5a proteins gang up and destroy the virus.

Cartoon Voices You may KNOW some of these members. Our members could be your teacher, a college student, your librarian, or even a neighbor in your city. Members post photos and videos of themselves performing sexual acts with partners or masturbating by themselves. These real, amateur images are high resolution and may be shocking to you. 02.22.2010 - An afternoon nap markedly boosts the brain’s learning capacity If you see a student dozing in the library or a co-worker catching 40 winks in her cubicle, don’t roll your eyes. New research from the University of California, Berkeley, shows that an hour’s nap can dramatically boost and restore your brain power. Indeed, the findings suggest that a biphasic sleep schedule not only refreshes the mind, but can make you smarter. Students who napped (green column) did markedly better in memorizing tests than their no-nap counterparts. (Courtesy of Matthew Walker) Conversely, the more hours we spend awake, the more sluggish our minds become, according to the findings.

LABOR - Germany's Air Berlin says will cut 900 jobs BERLIN - Agence France-Presse Germany's number two airline, Air Berlin, said on Tuesday it would slash about 900 jobs or nearly 10 percent of its workforce in a bid to get back in the black after nearly five years of losses.The troubled airline unveiled details of what it called its two-year "Turbine" programme extending across all its business divisions and focusing "on its key markets on the basis of a stringent business model"."'Turbine' has defined initiatives of around 400 million euros ($535 million) by the end of 2014 to achieve a lastingly competitive result," the company said in a statement."The programme covers all areas of operation and relationships with business partners as well.

Hash Oil Hash oil, AKA hashish oil, is a firm liquid made by dissolving high-THC cannabis and/or hash in a solvent (like alcohol, petroleum, acetone and others). After the solids break down, the liquid is strained and left out to encourage the complete evaporation of the remaining solvent. Once the solvent has evaporated fully, the remaining liquid is called hash oil. Interesting facts about hashish oil: Produced first by a British chemist, Peter Squire in 1840.

12 Tips for Getting Regular Exercise and the Benefits for Happiness and Fitness Exercise is a KEY to happiness . Research shows that people who exercise are healthier, more energetic, think more clearly, sleep better, and have delayed onset of dementia . They get relief from anxiety and mild depression . Internet Memes Timeline Trololololololololololo man Feb 28, 2010 6:00 PM Added to Youtube in November of 2009 the Video "Я очень рад, ведь я, наконец, возвращаюсь домой" had only few views until it was posted into several music blogs in march of 2010. In a week more than 1 million people watched the Trololololololololololo man sing his song. The title translates into 'I am very glad, because I’m finally back home'.

Wiltshire shooting: Solicitor James Ward who was blasted in the head with a sawn-off shotgun as he sat in his office has died after three weeks in hospital Married father-of-three James Ward, 58, died in hospital surrounded by his familyProperty developer Michael Chudleigh had already been charged with attempted murderPolice say they will work with Crown Prosecution Service to ensure charges reflect Mr Ward's death By Helen Lawson Published: 16:32 GMT, 23 July 2012 | Updated: 16:37 GMT, 23 July 2012 A solicitor who was shot in the head at his firm's offices in Devizes has died of his injuries with his family by his side. James Ward, 58, was shot by property developer Michael Chudleigh with a sawn-off shotgun on Monday July 2.

Cooking with Vaporized Weed These days Marijuana users are seeking out more healthful ways to consume Marijuana. That’s why many of us own vaporizers like the Volcano, Vapor Genie or one of the many homemade variations of. For years I disposed of my vapor “remnants” or “vapor poo” (who came up with that anyways?) into the trash receptacle. Not anymore! Tactile-Kinestheti Tactile-Kinesthetic Learners Making up about 5% of the population, tactile and kinesthetic learners absorb information best by doing, experiencing, touching, moving or being active in some way. Enjoy feeling, discovery and action Remember by using tools, building models and manipulating things Learn through emotions, touch, movement and space Enjoy demonstrations of concept demonstrations Master skills through imitation and practice.