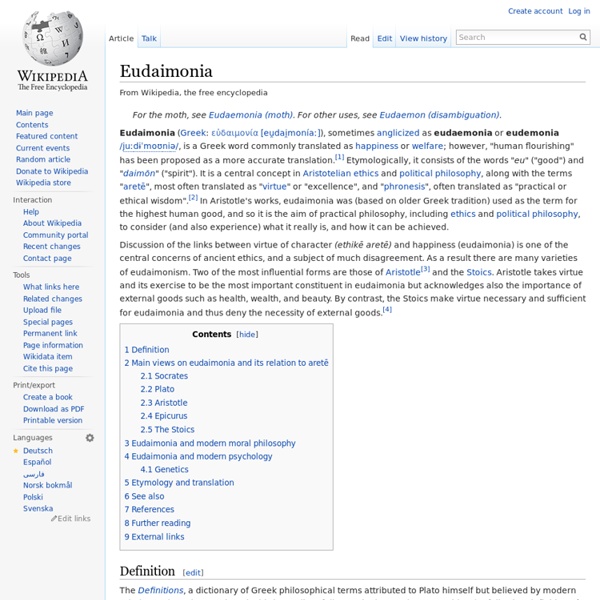 Discussion of the links between virtue of character (ethikē aretē) and happiness (eudaimonia) is one of the central concerns of ancient ethics, and a subject of much disagreement. As a result there are many varieties of eudaimonism. Two of the most influential forms are those of Aristotle[3] and the Stoics. Aristotle takes virtue and its exercise to be the most important constituent in eudaimonia but acknowledges also the importance of external goods such as health, wealth, and beauty. By contrast, the Stoics make virtue necessary and sufficient for eudaimonia and thus deny the necessity of external goods.[4] Definition[edit] The good composed of all goods; an ability which suffices for living well; perfection in respect of virtue; resources sufficient for a living creature. So, as Aristotle points out, saying that eudaimon life is a life which is objectively desirable, and means living well, is not saying very much. Main views on eudaimonia and its relation to aretē[edit] Socrates[edit]

26 ‘Habits’ of People With Depression While depression can be in some ways the absence of action, there are still little habits, little routines, a person may pick up on when they re-enter a depressive episode. These habits can be small indicators you’re beginning to feel depressed again. They can even be positive things — habits developed to help you survive. And because depression affects everyone2 differently, these little habits are different for everyone, too. To find out what habits people developed when they were experiencing depression, we asked our mental health community to share one thing they do when they’re depressed.

Successful aging - Wikipedia Successful aging (American English) or successful ageing (British English) refers to physical, mental and social well-being in older age. The concept of successful aging can be traced back to the 1950s, and was popularized in the 1980s. It reflects changing view on aging in Western countries, where a stigma associated with old age (see ageism) has led to considering older people as a burden on society. Consequently, in the past most of the scientists have been focusing on negative aspects of aging or preventing the decline of youth.[1][2] Research on successful aging, however, acknowledges the fact that there is a growing number of older adults functioning at a high level and contributing to the society. Definitions[edit]

Terence Roman comic playwright Publius Terentius Afer (; c. 195/185 – c. 159? BC), better known in English as Terence (), was a Roman playwright during the Roman Republic, of Berber descent. His comedies were performed for the first time around 170–160 BC. Terentius Lucanus, a Roman senator, brought Terence to Rome as a slave, educated him and later on, impressed by his abilities, freed him. Terence apparently died young, probably in Greece or on his way back to Rome. TiHKAL TIHKAL: The Continuation is a 1997 book written by Alexander Shulgin and Ann Shulgin about a family of psychoactive drugs known as tryptamines. A sequel to PIHKAL: A Chemical Love Story, TIHKAL is an acronym that stands for "Tryptamines I Have Known and Loved." Content[edit] TIHKAL, much like its predecessor PIHKAL, is divided into two parts. The first part, for which all rights are reserved, begins with a fictionalized autobiography, picking up where the similar section of PIHKAL left off; it then continues with a collection of essays on topics ranging from psychotherapy and the Jungian mind to the prevalence of DMT in nature, ayahuasca and the War on Drugs.

re:imagine Hosted by Grace Cathedral + OpenIDEO @ Grace Cathedral, 6:00-9:30pm No RSVP needed, the following activities are available all evening: Candlelight Labyrinth Walks. Walk labyrinths in candlelight and enjoy stirring music from Sam Jackson (singing bowl) and Gabriel Gold (halo) for the indoor labyrinth, and Kendra Fay (harp) and Destiny Muhammad (vocals) for the outdoor labyrinth. Walking instructions provided. The Innovation Chapel. www.ancient Gaius Suetonius Tranquillus (c. 69 – c. 130/140 CE), better known simply as Suetonius, was a Roman writer whose most famous work is his biographies of the first 12 Caesars. With a position close to the imperial court he was able to access otherwise private sources for his work, and he certainly did not hold back on revealing the sometimes sordid details of Rome’s most famously debauched emperors. Suetonius’ Life Although a biographer of others, Suetonius tells his readers very few details of his own life. The exact date of birth of Suetonius is not known for certain but the most agreed upon range is between 69 and 75 CE. Also uncertain are his place of birth (perhaps either Umbria or Hippo Regius in Numidia) and the year of his death.

Early trauma affects birds’ song memory : Deakin Invenio Deakin research linking early trauma in birds with their ability to remember important songs used for survival could have implications for human development. The authors of a paper recently published in the journal “Proceedings of the Royal Society of London B: Biological Sciences”, say their findings could shed light on the effects of early-life stress on speech and language development in children, as humans are the only other known group of animals apart from birds with dedicated parts in the brain for vocal learning. Lead researcher Professor Kate Buchanan, an avian behavioural ecologist in Deakin University’s Centre for Integrative Ecology, said the discovery was critical as the world’s birds used songs to help mate successfully and protect each other from predators, but now face increasing stress from changes to climate and habitat. “Of course, it would be unethical to run experiments with children to determine if stress affected vocal learning. “They are social birds.

How might we reimagine the end-of-life experience for ourselves and our loved ones? Each of our lives is a story. Let’s re-imagine how we prepare for, share and live through the final chapter. am asking that we make space – physical, psychic room, to allow life to play itself all the way out – so that rather than just getting out of the way, aging and dying can become a process of crescendo through to the end.” — BJ Miller

The Tempest play by William Shakespeare Characters[edit] Story[edit] Prospero, having divined that his brother Antonio is on a nearby ship, has raised a tempest that causes the passengers to believe they are shipwrecked and marooned. Also on the ship are Antonio's friend and fellow conspirator, King Alonso of Naples, Alonso's brother and son (Sebastian and Ferdinand, respectively) and Alonso's "trusted counsellor", Gonzalo. All these passengers are returning from the wedding of Alonso's daughter Claribel and the King of Tunis.

Feeling isolated? You're not alone. Here's why 1 in 4 of us is lonely - ABC Life Humans are social creatures. Our need to connect with others is deeply hardwired (and goes right back to when we'd hang out in groups so we could survive). Times have changed, but not being connected to others can still take a tremendous toll on our relationships, health, wellbeing, and our survival. So when one in four Australians reports feeling lonely at least one day a week, it's something we need to pay attention to. The issue is so pervasive, and its effects are so damaging, that experts warn of a "loneliness epidemic" that could be our next public health crisis. This is why ABC Life will be focusing on the issue of social isolation and loneliness: Who's lonely in Australia; what we can do to start reconnecting; and what social isolation looks like in practice.