6 Animals That Can Get You High 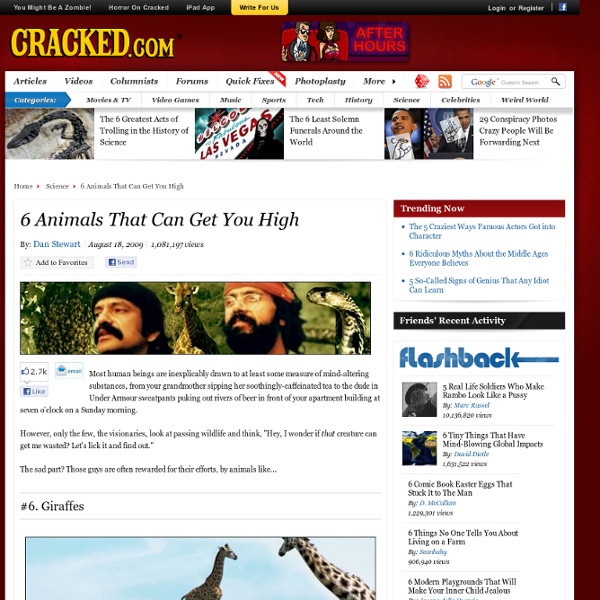 Most human beings are inexplicably drawn to at least some measure of mind-altering substances, from your grandmother sipping her soothingly-caffeinated tea to the dude in Under Armour sweatpants puking out rivers of beer in front of your apartment building at seven o'clock on a Sunday morning. However, only the few, the visionaries, look at passing wildlife and think, "Hey, I wonder if that creature can get me wasted? Let's lick it and find out." The sad part? Those guys are often rewarded for their efforts, by animals like... The Arabic-speaking Humr people of Sudan are strictly forbidden to partake in any plant-based intoxicant such as alcohol or cannabis, which is a bizarrely specific restriction reminiscent of the Transportation Security Administration's express identification of nunchucks as a prohibited item on airplanes. You can't see it, but Bear has nunchucks. "Shit, are you the giraffe I just killed and made drugs from, or the giraffe I'm about to kill and make drugs from?"

Decriminalizing Drugs in Portugal a Success, Says Report Pop quiz: Which European country has the most liberal drug laws? (Hint: It's not the Netherlands.) Although its capital is notorious among stoners and college kids for marijuana haze–filled "coffee shops," Holland has never actually legalized cannabis — the Dutch simply don't enforce their laws against the shops. The correct answer is Portugal, which in 2001 became the first European country to officially abolish all criminal penalties for personal possession of drugs, including marijuana, cocaine, heroin and methamphetamine. At the recommendation of a national commission charged with addressing Portugal's drug problem, jail time was replaced with the offer of therapy. The argument was that the fear of prison drives addicts underground and that incarceration is more expensive than treatment — so why not give drug addicts health services instead? The question is, does the new policy work? Compared to the European Union and the U.S., Portugal's drug use numbers are impressive.