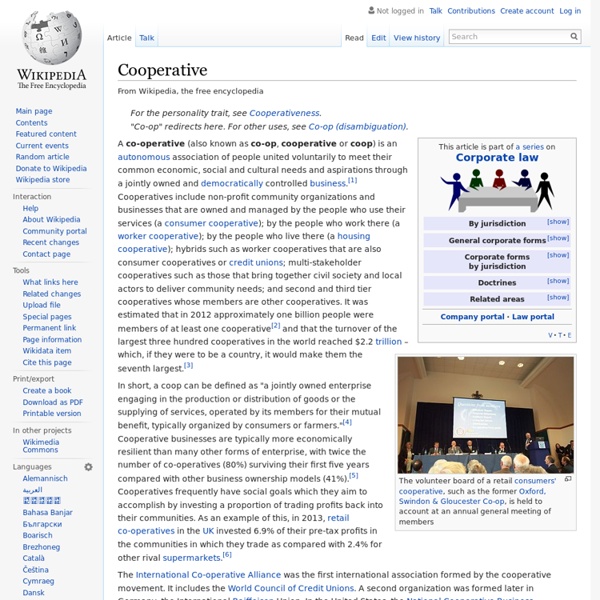 In short, a coop can be defined as "a jointly owned enterprise engaging in the production or distribution of goods or the supplying of services, operated by its members for their mutual benefit, typically organized by consumers or farmers."[4] Cooperative businesses are typically more economically resilient than many other forms of enterprise, with twice the number of co-operatives (80%) surviving their first five years compared with other business ownership models (41%).[5] Cooperatives frequently have social goals which they aim to accomplish by investing a proportion of trading profits back into their communities. As an example of this, in 2013, retail co-operatives in the UK invested 6.9% of their pre-tax profits in the communities in which they trade as compared with 2.4% for other rival supermarkets.[6] The International Co-operative Alliance was the first international association formed by the cooperative movement. Origins[edit] Social economy[edit] Meaning[edit] Identity[edit] Related:  Inner Search • Global-scale funding/finance • Saved Wiki

TechShop is America's 1st Nationwide Open-Access Public Workshop -- What Do You Want To Make at TechShop? Self-organization Self-organization occurs in a variety of physical, chemical, biological, robotic, social and cognitive systems. Common examples include crystallization, the emergence of convection patterns in a liquid heated from below, chemical oscillators, swarming in groups of animals, and the way neural networks learn to recognize complex patterns. Overview[edit] The most robust and unambiguous examples[1] of self-organizing systems are from the physics of non-equilibrium processes. Sometimes the notion of self-organization is conflated with that of the related concept of emergence, because "[t]he order from chaos, presented by Self-Organizing models, is often interpreted in terms of emergence".[2] Properly defined, however, there may be instances of self-organization without emergence and emergence without self-organization, and it is clear from the literature that the phenomena are not the same. Self-organization usually relies on three basic ingredients:[3] Principles of self-organization[edit]

Distributism - Wikipedia Doctrine in opposition to both socialism and capitalism Distributism is an economic theory asserting that the world's productive assets should be widely owned rather than concentrated.[1] It was developed in Europe in the late 19th and early 20th centuries based upon the principles of Catholic social teaching, especially the teachings of Pope Leo XIII in his encyclical Rerum novarum (1891) and Pope Pius XI in Quadragesimo anno (1931).[2][3][4] It views both capitalism and socialism as equally flawed and exploitative, and it favors economic mechanisms such as small-scale cooperatives and family businesses, and large-scale antitrust regulations. Some Christian Democratic political parties have advocated distributism in their economic policies. Overview[edit] Background[edit] The mid-to-late 19th century witnessed an increase in popularity of political Catholicism across Europe.[19] According to historian Michael A. Position within the political spectrum[edit] Economic theory[edit] Banks[edit]

Creative industries The creative industries refers to a range of economic activities which are concerned with the generation or exploitation of knowledge and information. They may variously also be referred to as the cultural industries (especially in Europe (Hesmondhalgh 2002, p. 14) or the creative economy (Howkins 2001), and most recently they have been denominated as the Orange Economy in Latin America and the Caribbean (Buitrago & Duque 2013). Howkins' creative economy comprises advertising, architecture, art, crafts, design, fashion, film, music, performing arts, publishing, R&D, software, toys and games, TV and radio, and video games (Howkins 2001, pp. 88–117). Some scholars consider that education industry, including public and private services, is forming a part of creative industry.[1] There remain, therefore, different definitions of the sector (Hesmondhalgh 2002, p. 12)(DCMS 2006). Definitions[edit] As of 2015[update] the DCMS definition recognizes nine creative sectors, namely:[2] Others[who?]

OKFestival Five Manifestos for the Creative Life by Kirstin Butler How a numbered list can start a personal revolution. Some days everyone needs a little extra encouragement. The words or lines or colors don’t want to come, or worse, we don’t even want to sit down to create. We’ve long been fans of the amazing work of Frederick Terral, the creative visionary behind design studio Right Brain Terrain. You may not be a Picasso or Mozart but you don’t have to be. We can’t imagine more sound advice. Guidelines to get you from Point A to finished product, The Cult of Done Manifesto was written by tech guru Bre Pettis (of MakerBot fame) in collaboration with writer Kio Stark in 20 minutes, “because we only had 20 minutes to get it done.” Pretending you know what you’re doing is almost the same as knowing what you are doing, so just accept that you know what you’re doing even if you don’t and do it.” With iteration at the heart of its process, The Cult of Done Manifesto will banish your inner perfectionist (and its evil twin, procrastination).

Horizontalidad - Wikipedia Horizontality or horizontalism is a social relationship that advocates the creation, development, and maintenance of social structures for the equitable distribution of management power. These structures and relationships function as a result of dynamic self-management, involving the continuity of participation and exchange between individuals to achieve the larger desired outcomes of the collective whole. Origin[edit] As a specific term, horizontalidad is attributed to the radical movements that sprouted in December 2001, in Argentina, after the economic crisis. Horizontalidad is related to the theories of communist anarchism, social ecology and libertarian municipalism, autonomist marxism and participatory economics.[3] According to these schools of thought, horizontality seems to be a necessary factor for real freedom because it allows personal autonomy within a framework of social equality. Practice[edit] Constructing freedom is a learning process that can only happen in practice.

Critical path method History[edit] The critical path method (CPM) is a project modeling technique developed in the late 1950s by Morgan R. Walker of DuPont and James E. Kelley Jr. of Remington Rand.[3] Kelley and Walker related their memories of the development of CPM in 1989.[4] Kelley attributed the term "critical path" to the developers of the Program Evaluation and Review Technique which was developed at about the same time by Booz Allen Hamilton and the U.S. Navy.[5] The precursors of what came to be known as Critical Path were developed and put into practice by DuPont between 1940 and 1943 and contributed to the success of the Manhattan Project.[6] Critical Path Analysis is commonly used with all forms of projects, including construction, aerospace and defense, software development, research projects, product development, engineering, and plant maintenance, among others. Basic technique[edit] Components[edit] Visualizing critical path schedule[edit] Crash duration[edit] Expansion[edit] Flexibility[edit]