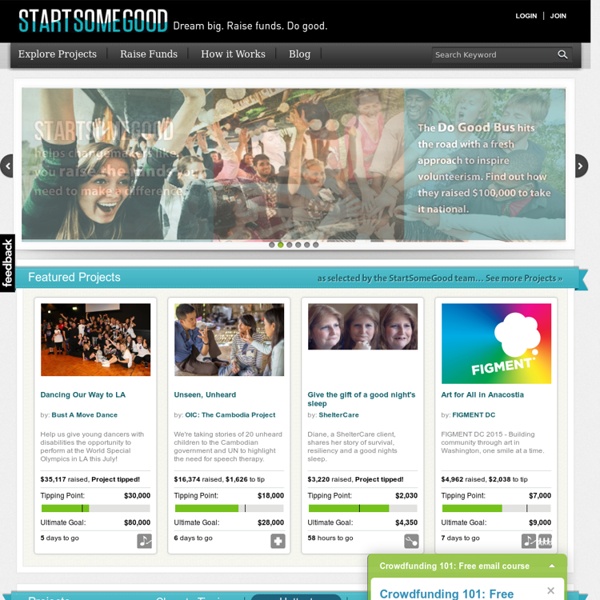 Help ELP launch an online store to enable remote Aboriginal entrepreneurs to connect with consumers. $7,501 raised, $0 to tip Tipping Point: Ultimate Goal: 30 days to go Our truck has broken down beyond repair and we need to replace it to successfully continue our recycling project.

Crowd Investing The Journey to Legalize Crowdfunding Thanks to the support of people like you, all Americans will soon have the right to invest in startups they believe in. Congress just passed the CROWDFUND Act, allowing you to invest in what could be the next Facebook or own a piece of your local organic food market. Before crowdfunding, this opportunity was only available to accredited investors, who have $1,000,000 or more in assets or earn more than $200,000 a year.

Eppela - Italian Crowdfunding Over 580 candles sold in 40 days! 225 supporters joined in the value of handicraft made ??in Italy! FAMO crowdfunding € 5,233 for the magazine dedicated to the undeground italian talents Local Currencies: Communities Printing Own Money To Keep Cash Flowing UPDATE: USA Today's reporting on local currencies gives the impression that this is a NEW phenomenon born from the recession. Rather, many of these programs have existed for some time. The organization that runs BerkShares, told Huffington Post that it has been producing currency since 2006, well before the financial crisis dominated headlines. Ithaca Hours have been in production since 1991. Despite the fact that these currencies have existed - a point USA Today should update - there is a growing interest in currency production for communities hit by the recession.

GoFundMe.com Get your very own crowdfunding website! Navy Blue Page Theme Crowdfunding is a great way to raise money for the things that matter to you most. As you might have guessed the word 'crowdfunding' means raising money (funding) from a bunch of different people (crowd). People create crowdfunding websites on GoFundMe for all sorts of fundraising ideas. Embassy Network Guests are a cornerstone of our house and we love having new (and familiar) people stay with us. This isn’t your typical B&B – it’s more of an adopted family. We’re working on the hypothesis that density breeds ideas and collaborations, and that’s a big part of what we hope to foster here. We know and expect that guests are usually traveling for specific projects and collaborations. Similarly, residents are working on their own projects most days.

Crowd funding Crowdfunding is the practice of funding a project or venture by raising monetary contributions from a large number of people, typically via the internet.[1] One early-stage equity expert described it as “the practice of raising funds from two or more people over the internet towards a common Service, Project, Product, Investment, Cause, and Experience, or SPPICE.”[2] The crowdfunding model is fueled by three types of actors: the project initiator who proposes the idea and/or project to be funded; individuals or groups who support the idea; and a moderating organization (the "platform") that brings the parties together to launch the idea.[3] In 2013, the crowdfunding industry grew to be over $5.1 billion worldwide.[4] History[edit]

Stop Fearing, Start Thinking: The Fixperts Social Project We're lucky. I mean, really lucky. We live in a global culture of makers, imaginers, and inventors. Great! The next step is to verify your address. There was a problem connecting your Facebook account. Please sign in to Nextdoor Design District to continue. If you don't have an account, sign up. Nextdoor The private social network for neighbors in Design District. San Francisco, CA

ii. Foreword by Charles Eisenstein FOREWORD by Charles Eisenstein Going into my first conversation with Mark Boyle a year ago, I was feeling a little bit defensive. “He probably thinks he is better than the rest of us,” I thought. “More ethical, more pure, less complicit in the sins of civilization.” His very lifestyle was an implied accusation. When we actually began talking, though, I found Mark to be free of sanctimoniousness or self-congratulation.

crowdfunding for non-profits, social entrepreneurs and changemakers by nickyflook May 30