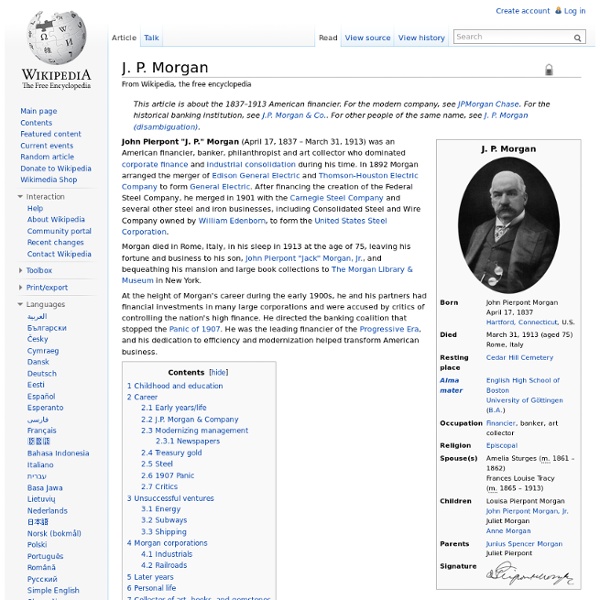 John Pierpont "J. P." Morgan (April 17, 1837 – March 31, 1913) was an American financier, banker, philanthropist and art collector who dominated corporate finance and industrial consolidation during his time. In 1892 Morgan arranged the merger of Edison General Electric and Thomson-Houston Electric Company to form General Electric. After financing the creation of the Federal Steel Company, he merged in 1901 with the Carnegie Steel Company and several other steel and iron businesses, including Consolidated Steel and Wire Company owned by William Edenborn, to form the United States Steel Corporation. Morgan died in Rome, Italy, in his sleep in 1913 at the age of 75, leaving his fortune and business to his son, John Pierpont "Jack" Morgan, Jr., and bequeathing his mansion and large book collections to The Morgan Library & Museum in New York. Childhood and education[edit] J. Career[edit] Early years and life[edit] J. J.P. After the 1893 death of Anthony Drexel, the firm was rechristened "J. Related:  Banking and finance issues • Interesting common american

Rothschild family A house formerly belonging to the Viennese branch of the family (Schillersdorf Palace). Schloss Hinterleiten, one of the many palaces built by the Austrian Rothschild dynasty. Donated to charity by the family in 1905. Beatrice de Rothschild's villa on the Côte d'Azur, France The Rothschild family is a family descending from Mayer Amschel Rothschild, a court Jew to the German Landgraves of Hesse-Kassel, in the Free City of Frankfurt, who established his banking business in the 1760s.[1] Unlike most previous court Jews, Rothschild managed to bequeath his wealth, and established an international banking family through his five sons.[2] Five lines of the Austrian branch of the family have been elevated to Austrian nobility, being given five hereditary titles of Barons of the Habsburg Empire by Emperor Francis II in 1816. Family overview[edit] The first member of the family who was known to use the name "Rothschild" was Izaak Elchanan Rothschild, born in 1577. Families by country: Wine[edit]

Great Depression USA annual real GDP from 1910–60, with the years of the Great Depression (1929–1939) highlighted. The unemployment rate in the US 1910–1960, with the years of the Great Depression (1929–1939) highlighted. In the 21st century, the Great Depression is commonly used as an example of how far the world's economy can decline.[2] The depression originated in the U.S., after the fall in stock prices that began around September 4, 1929, and became worldwide news with the stock market crash of October 29, 1929 (known as Black Tuesday). The Great Depression had devastating effects in countries rich and poor. Personal income, tax revenue, profits and prices dropped, while international trade plunged by more than 50%. Cities all around the world were hit hard, especially those dependent on heavy industry. Some economies started to recover by the mid-1930s. Start Even after the Wall Street Crash of 1929, optimism persisted for some time; John D. Economic indicators Causes General theoretical explanations

Morgan Stanley Morgan Stanley (NYSE: MS) is an American multinational financial services corporation headquartered in the Morgan Stanley Building, Midtown Manhattan, New York City.[5] Morgan Stanley operates in 42 countries and has more than 1300 offices and 60,000 employees.[6] The company reports US$1.9 trillion in client assets under management as of the end of 2013.[4] The corporation, formed by J.P. Morgan & Co. partners Henry S. Morgan (grandson of J.P. Morgan), Harold Stanley and others, came into existence on September 16, 1935, in response to the Glass-Steagall Act that required the splitting of commercial and investment banking businesses. In its first year the company operated with a 24% market share (US$1.1 billion) in public offerings and private placements. Overview[edit] The Morgan Stanley Building History[edit] Early years: 1935–1950[edit] Morgan Stanley can trace its roots in the history of J.P. Middle years: 1950–1990[edit] 1991–present[edit] Current Morgan Stanley Logo 2013 2003[edit]

Just a Bump in the Road » About You can talk about the need to end poverty; give a dollar to someone on the street, and feel pity; or you can do something to make a difference. I’m just an average person who believes that everyone deserves a home, a living wage, a community. I’m walking across the United States to talk to people who are experiencing poverty and homelessness firsthand, and to raise awareness of the growing problem. I began my journey of 3,000 miles on July 4, 2009, in Washington. Along the way I’ve gotten arrested, survived a tornado, had a run-in with a polar bear (slight dramatization) walked for two weeks on a leg I didn’t know was broken and met so many amazing people. When I began my journey, I had no idea what I would find. What I found was far different than the stereotypical fat, loud and selfish America we hear so much about. Walking gives me the rare opportunity to talk to people about the struggles they face, about their hopes and dreams, and to share a drink or a laugh. Jennifer E.

Woodrow Wilson In his first term as President, Wilson persuaded a Democratic Congress to pass a legislative agenda that few presidents have equaled, remaining unmatched up until the New Deal in 1933.[2] This agenda included the Federal Reserve Act, Federal Trade Commission Act, the Clayton Antitrust Act, the Federal Farm Loan Act and an income tax. Child labor was curtailed by the Keating–Owen Act of 1916, but the U.S. Supreme Court declared it unconstitutional in 1918. Wilson also had Congress pass the Adamson Act, which imposed an 8-hour workday for railroads.[3] Although considered a modern liberal visionary giant as President, Wilson was "deeply racist in his thoughts and politics" and his administration racially segregated federal employees and the Navy.[4][5] According to Wilson biographer A. Scott Berg, author of Wilson, an 815-page biography; "No matter what time you lived, some of the things Wilson said and did were racist. That being said, I do think that for his day, he was a centrist.

J. P. Morgan, Jr. John Pierpont "Jack" Morgan, Jr. (September 7, 1867 – March 13, 1943) was an American banker and philanthropist.[1] Biography[edit] Morgan, Jr. was born on September 7, 1867 in Irvington, New York to J. P. Career[edit] Jack Morgan walking alongside his father J. The younger Morgan resembled his father in his dislike for publicity and continued his father's philanthropic policy. World War I[edit] Morgan played a prominent part in financing World War I. At the beginning of World War I, US Treasury Secretary William McAdoo and others in the Wilson administration were very suspicious of J. On 3 July 1915, an intruder, Eric Muenter, entered Morgan's Long Island mansion and shot him twice in an attempt to assassinate him. Postwar[edit] After World War I and the Versailles Treaty, Morgan Guaranty managed Germany's reparation payments. A yachtsman, like his father, Morgan served as commodore of the New York Yacht Club from 1919 to 1921. Philanthropy[edit] Social[edit] References[edit] Jump up ^ J.P.