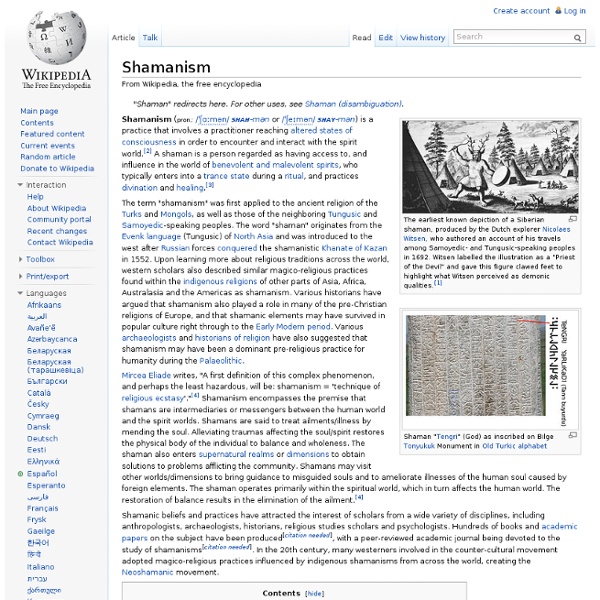 The earliest known depiction of a Siberian shaman, produced by the Dutch explorer Nicolaes Witsen, who authored an account of his travels among Samoyedic- and Tungusic-speaking peoples in 1692. Witsen labelled the illustration as a "Priest of the Devil" and gave this figure clawed feet to highlight what Witsen perceived as demonic qualities.[1] Shamanism (/ˈʃɑːmən/ SHAH-mən or /ˈʃeɪmən/ SHAY-mən) is a practice that involves a practitioner reaching altered states of consciousness in order to encounter and interact with the spirit world and channel these transcendental energies into this world.[2] A shaman is a person regarded as having access to, and influence in, the world of benevolent and malevolent spirits, who typically enters into a trance state during a ritual, and practices divination and healing.[3] The term "shamanism" was first applied to the ancient religion of the Turks and Mongols, as well as those of the neighboring Tungusic and Samoyedic-speaking peoples. Terminology[edit]

Ascended master Both "Mahatmas" and "Ascended Master" are terms used in the Ascended Master Teachings. Ascended Master is based on the Theosophical concept of the Mahatma or Master of the Ancient Wisdom. However, "Mahatmas" and "Ascended Masters" are believed by some to differ in certain respects. Kama Sutra The Kama Sutra (/ˈkɑːmə ˈsuːtrə/; Sanskrit: कामसूत्र, pronunciation , Kāmasūtra) is an ancient Indian Sanskrit text on sexuality, eroticism and emotional fulfillment in life.[2][3] Attributed to Vātsyāyana, the Kama Sutra is neither exclusively nor predominantly a sex manual on sex positions,[5] but written as a guide to the "art-of-living" well, the nature of love, finding a life partner, maintaining one's love life, and other aspects pertaining to pleasure-oriented faculties of human life.[6][7] Kamasutra is the oldest surviving Hindu text on erotic love. It is a sutra-genre text with terse aphoristic verses that have survived into the modern era with different bhasya (exposition and commentaries). The text is a mix of prose and anustubh-meter poetry verses. The text acknowledges the Hindu concept of Purusharthas, and lists desire, sexuality, and emotional fulfillment as one of the proper goals of life.

Shamanism A shaman is a medicine man or woman. Shaman are spiritual beings with the ability to heal, work with energies and 'see' visions. The essential characteristics of shaman are mastery of energy and fire as a medium of transformation. Nadi (yoga) Chakra Kundalini Diagram Nāḍi (tube, pipe") are the channels through which, in traditional Indian medicine and spiritual science, the energies of the subtle body are said to flow. They connect at special points of intensity called chakras. The word "nadi" is pronounced as "naRdi", with R+d loosely pronounced together (the effort is made by the tip of the tongue; it curls up, pointing backwards, then springs forward to lie flat). In normal biological reference, a nadi can be translated into "nerve" in English.

Moksha In Indian religions and Indian philosophy, moksha (Sanskrit: मोक्ष mokṣa), also called vimoksha, vimukti and mukti,[1] means emancipation, liberation or release.[2] In the soteriological and eschatological sense, it connotes freedom from saṃsāra, the cycle of death and rebirth. In the epistemological and psychological sense, moksha connotes freedom, self-realization and self-knowledge.[4] In Hindu traditions, moksha is a central concept[5] and included as one of the four aspects and goals of human life; the other three goals are dharma (virtuous, proper, moral life), artha (material prosperity, income security, means of life), and kama (pleasure, sensuality, emotional fulfillment).[6] Together, these four aims of life are called Puruṣārtha in Hinduism.[7]

Kama Deity Kama whose arrows trigger desire Love, Male and Female, Tantric Yantra Aesthetic pleasure from arts, nature[2] Kama, in Hinduism, is one of the four goals of human life.[1] Above illustrate examples of kama. Kama (Sanskrit, Pali; Devanagari: काम) means "desire, wish, longing" in Hindu and Buddhist literature.[3] Kama often connotes sexual desire and longing in contemporary literature, but the concept more broadly refers to any desire, wish, passion, longing, pleasure of the senses, desire for, longing to and after, the aesthetic enjoyment of life, affection, or love, enjoyment of love is particularly with or without enjoyment of sexual, sensual and erotic desire, and may be without sexual connotations.[4][5]

Akashic records Background[edit] Akasha is a Sanskrit word meaning "sky", "space" or "aether", and it entered the language of theosophy through H. P. Blavatsky, who characterized it as a sort of life force; she also referred to "indestructible tablets of the astral light" recording both the past and future of human thought and action, but she did not explicitly identify these as "akashic" in nature.[1] The notion of an akashic record is attributed to Alfred Percy Sinnett, who, in his book Esoteric Buddhism (1884), wrote of a Buddhist belief in "a permanency of records in the Akasa" and "the potential capacity of man to read the same."[2][1] By C. Artha Artha[pronunciation?] (Sanskrit: अर्थ) is one of the four aims of human life in Indian philosophy.[1] The word artha literally translates as “meaning, sense, goal, purpose or essence” depending on the context.[4] Artha is also a broader concept in the scriptures of Hinduism. As a concept, it has multiple meanings, all of which imply “means of life”, activities and resources that enables one to be in a state one wants to be in.[2]

Tao Tao or Dao (/taʊ/, /daʊ/; Chinese: 道; pinyin: Dào ) is a Chinese concept signifying 'way', 'path', 'route', or sometimes more loosely, 'doctrine' or 'principle', or as a verb, speak. Within the context of traditional Chinese philosophy and religion, Tao is a metaphysical concept originating with Laozi that gave rise to a religion (Wade–Giles, Tao Chiao; Pinyin, Daojiao) and philosophy (Wade–Giles, Tao chia; Pinyin, Daojia) referred to in English with the single term Taoism.