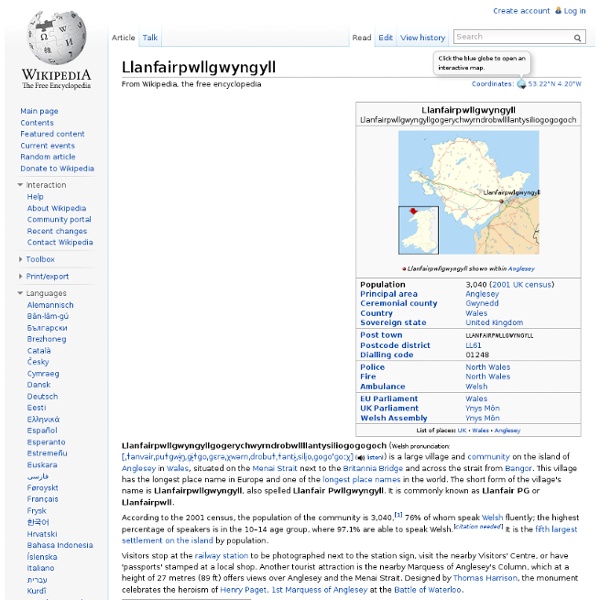 Coordinates: Llanfairpwllgwyngyllgogerychwyrndrobwllllantysiliogogogoch (pronounced [ˌɬanvairˌpuɬɡwɨ̞nˌɡɨ̞ɬɡoˌɡɛrəˌχwərnˌdrobuɬˌɬantɨ̞ˌsiljoˌɡoɡoˈɡoːχ] ( At the 2001 census the population of the community was 3,040,[1] 76% of whom speak Welsh fluently; the highest percentage of speakers is in the 10–14 age group, where 97.1% speak Welsh.[citation needed] It is the sixth largest settlement on the island by population. Name[edit] The name means: [St.] This village was originally known as Llanfair Pwllgwyngyll (and is sometimes still referred to as Llanfairpwllgwyngyll) and was given its long name in the 19th century in an attempt to develop it as a commercial and tourist centre (see Significance of the name below). The name is also shortened to Llanfair PG, which is sufficient to distinguish it from the many other Welsh villages with Llanfair in their names. Significance of the name[edit] Illustration of a sign showing the name and English translation of the town Pronunciation[edit]

Free Things to Do - Free Tips on Saving Money at WomansDay As much as I love the word, I have to admit it makes me suspicious. Just this week I won a “free” vacation, but the fine print says I need to send in a cashier's check to claim my prize. Sadly, “free” is usually a sneaky way to clean out my wallet. But every now and then an exception comes along that's truly free-no strings attached, no hidden agendas. Business cardsVistaPrint is an online printing company known for its amazing offer of 250 free business cards. Why's it free? Expert computer helpIf you've ever had a computer problem and wanted to pull out your hair in frustration, this is for you. Why's it free? Spanish lessonsWant to learn the basics of practical spoken Spanish? Why's it free? Business classesLearn everything from how to write a business plan to how to finance your venture through the Small Business Administration's website (sba.gov). Why's it free? Credit reportIf you haven't done this already, do it now. Why's it free? Why's it free? Why's it free? Why's it free?

- StumbleUpon Is it a dream or is it for real? These places will make you wonder whether you step into the land of magic and fantasy or still firmly stand on the ground. With unearthly nature, unreal landscapes or fairy tale architecture, these destinations will take you far away from your humdrum reality. Picturesque Colmar in France, considered the most beautiful city in Europe, looks like it came straight out of a fairy tale. As if being the wine capital was not enough, Colmar, with its pretty squares, fountains and canals, is also called the "little Venice" (la Petite Venise). The Lord of the Rings' scenery of Faroe Islands truly makes you believe the archipelago is inhabited by hobbits and elves. Saksun, Faroe Islands. Castle Neuschwanstein in Bavaria, Germany in autumn. It is not a sugary Disneyland construction, although it looks like a fairy tale palace occupied by some capricious princess. If there was a fairy tale about the enchanted land of clay, its setting would look like Cappadocia.

10 Weird and Mysterious Places on Earth - StumbleUpon digg 1. Mystery Spot Mystery Sport is a tourist attraction near Santa Cruz, California, famous because of its disrespect to the laws of physics and gravity. 2. The question about the triangle that swallows ships, planes and all the people with them still waits for its answer. 3. Socotra is archipelago the Horn of Africa and Arabic Peninsula, but the main island of Socotra is 95% of the whole landmass, while the rest is just small islands. 4. Mount Roraima is located on the triple border point between Brazil, Guyana and Venezuela. 5. Rio Tinto is located in south-western Spainand originates from Sierra Morena mountains of Andalusia. 6. The Fly Geyser, near Gerlach, Nevada, is strange because it somehow grows up. 7. McMurdo Dry Valleys are located on Antarctica but, believe it or not, they lack snow. 8. The well known statues on the Easter Island, the moai, still remain mystery for the researchers. 9. 10. Racetrack Playa in California is well known due to its sailing stones.

6 Insane Coincidences You Won't Believe Actually Happened America's Freak Luck During the Battle of Midway The Battle of Midway may be remembered as one of the most spectacular naval battles in history and one of the huge turning points in the Pacific theater, but it started out as a pure clusterfuck for the Americans. Despite going into battle with most of Japan's game plan in their pocket thanks to American codebreakers/Bothan spies, the U.S. Navy had little to show for it in the early hours of June 4, 1942. Where it Gets Weird: There was one squadron of American dive bombers lead by Lieutenant Commander C. His squadron started dropping like flies until, in an act of sheer luck that would make even J.K. Where it Gets Even Weirder: While finding the ships at all was luck, by some kind of ridiculous freak luck McClusky's squadron arrived at the precise moment when all three Japanese carriers were reloading and rearming their aircraft. It'd be like this happening four times, and all in one battle. ...when he wasn't busy being a pimp.

TLC Home &Knitting in the Round& To avoid sewing seams, you can work in rounds using circular needles or double-pointed needles. Circular Needles To work in rounds, cast your stitches on one end of the needle the same as you would on a straight needle. Knitting with Circular Needles: Figure 14a Double-Pointed Needles Evenly distribute your cast-on over three or four needles, keeping one needle out to knit with. Knitting with Double-Pointed Needles: Figure 14b In the next section, you'll learn how to add stitches to your work. 10 Places to Move Abroad and Extend Your Life - StumbleUpon Throughout history, people have been intrigued by legends of societies where residents thrived well past 100 years old. Today, there is skepticism whether any such place exists, but health scientists do scour the globe in search of medicinal remedies and other lifespan enhancements. In fact, many “pockets” around the world have been identified as “Blue Zones,” where locals enjoy high quality of life and health in old age. While failing to offer one “secret,” these regions share community factors such as diet, social integration, activity level, and outlook on life. While genetics plays a role in how long we live, researchers believe lifestyle factors account for 75% of our longevity. 1. Japanese rank high in lifespan studies, but Okinawans boast exceptional health. Okinawan cuisine, Photo: pelican The Okinawa diet has been studied intensely. 2. Situated between Spain and France, this small principality of 84,000 people has one of the longest life expectancies in world. 3. 4. 5. 6. 7. 8. 9.

Guess Someone's Astrological Sign Favorite This Article Edit Article Edited by David J, Brett, Vivek Kumar Rohra, Jack Herrick and 76 others Has anyone ever guessed your astrological sign? It's an amazing feat to perform and it requires research and practice. While not everyone believes this is possible or that the Zodiac has any meaning, here are some tips from those who believe it can be done. Ad Steps 1Look for people with strong personalities. 9Predict a person's two basic signs: 1) monthly sign such as Aries, Taurus, Gemini etc, and 2) yearly sign such as boar, rat, ox etc. Tips Fire signs are easy to recognize but sometimes difficult to tell apart. Warnings Everyone has different birth charts, so not everyone looks and acts in accordance to their birth signs.

How To Fix The Economy Dear Mr. President: Please find below my suggestion for fixing America 's economy. Instead of giving billions of dollars to companies that will squander the money on lavish parties and unearned bonuses, use the following plan. You can call it the Patriotic Retirement Plan: There are about 40 million people over 50 in the work force. Pay them $1 million apiece severance for early retirement with the following stipulations: 1) They MUST retire. 2) They MUST buy a new American CAR. 3) They MUST either buy a house or pay off their mortgage - Housing Crisis fixed. 4) They MUST buy their own health insurance. - Health Plan for seniors just fixed!!! It can't get any easier than that! If not, please disregard. God Bless America.

Plitvice Lakes National Park, Croatia | Beautiful Places to Visit - StumbleUpon The stunning Plitvice Lakes National Park lies in the Lika region of Croatia. The park is surrounded by the mountains Plješevica, Mala Kapela, and Medveđak, which are part of the Dinaric Alps. The 16 blue-green Plitvice Lakes, which are separated by natural dams of travertine, are situated on the Plitvice plateau. Waterfalls connect the lakes, and the tallest waterfall is Veliki Slap at 70 meters (230 feet) tall. The Plitvice lakes area boasts a large variety of interesting and colorful flora and fauna. Visitors can enjoy walking and hiking the many pathways and trails, or exploring the lakes by boat.