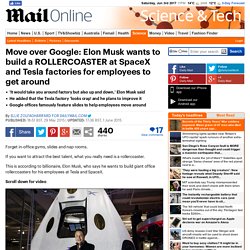 If you want to attract the best talent, what you really need is a rollercoaster. This is according to billionaire, Elon Musk, who says he wants to build giant office rollercoasters for his employees at Tesla and SpaceX. Scroll down for video. Full Committee Hearing- Climate Science: Assumptions, Policy Implications, and the Scientific Method. The World's Most Powerful Supercomputer Is Still in China. How Plumbing (Not Vaccines) Eradicated Disease - ORGANIC AND HEALTHY. Government health organisations and big pharmaceuticals are quick to tell the world it is due to vaccinations that the numbers of disease in the population have fallen, when in fact you are better off thanking a plumber. 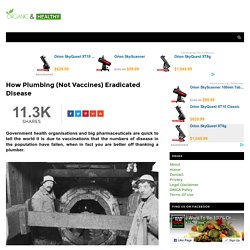 Before plumbing was commonplace, the average 'sanitation' station in a house consisted of a basin and a jug to fill with water, human waste was disposed of wherever possible. The rates of death and disease during these times were incredibly high. Life expectancy was no better than middle age and outbreaks such as the The Black Plague were commonplace, wiping out huge swathes of the population at once. The Black Plague alone killed 75 million – 200 million people, around 1/3 of Europe’s population. Polio in India. Which Countries Run On 100% Renewable Energy? - Video.

Researchers at Stanford and UC-Davis recently issued a landmark study that has policy makers buzzing. 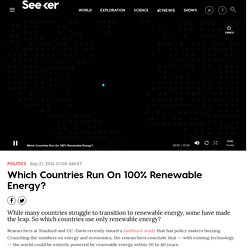 Crunching the numbers on energy and economics, the researchers conclude that -- with existing technology -- the world could be entirely powered by renewable energy within 20 to 40 years. The study also concludes that, while the technology is there, the political will to make changes may not be. In this edition of Seeker Daily, Laura Ling looks at countries that have already switched to alternative sources for some or all of their energy needs. Amazingly, the Central American nation of Costa Rica actually ran on 100 percent renewable energy for 300 out of 365 days in 2015. Almost all of the country's infrastructure and utility energy is provided by hydroelectric and geothermal power, although the country still has about two million cars driving around using gas. RELATED: Eye-Catching Iridescent Cloud Pops Up Over Costa Rica. I Became a Citizen of Bitnation, a Blockchain-Powered Virtual Nation. Now What? 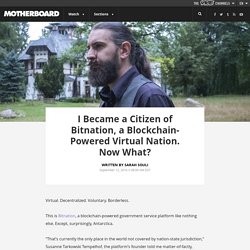 Decentralized. Voluntary. Massive permaculture project lifts 2.5 million out of poverty. If you visit the Loess Plateau right now you will find a suitably luscious landscape in the province thought to be the cradle of Chinese civilisation. 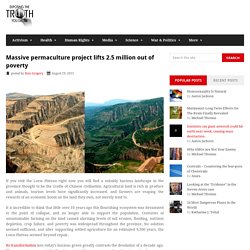 Agricultural land is rich in produce and animals, tourism levels have significantly increased, and farmers are reaping the rewards of an economic boom on the land they own, not merely tend to. It is incredible to think that little over 10 years ago this flourishing ecosystem was devastated to the point of collapse, and no longer able to support the population.

Centuries of unsustainable farming on the land caused alarming levels of soil erosion, flooding, nutrient depletion, crop failure, and poverty was widespread throughout the province. What Will You Do When The Lights Go Out? The Inevitable Failure Of The US Grid. Texplainer: Why Does Texas Have Its Own Power Grid? Vancouver plans to go 100% renewable. I asked the city’s manager about the challenges it faces. Last year, Vancouver, British Columbia, officially adopted the goal of powering itself entirely with clean energy by 2050. 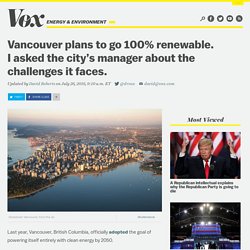 That’s a bigger deal than it might sound. Plenty of North American cities have committed to getting all their electricity from clean sources within a few decades. But when it comes to decarbonization, electricity is the easy part. (Okay, maybe not easy, but easier.) Vancouver has resolved to get all its energy, not just electricity, from renewable sources. 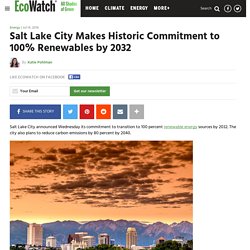 The city also plans to reduce carbon emissions by 80 percent by 2040. Salt Lake City skyline. Mayor Jackie Biskupski and city council members signed a joint resolution Tuesday creating the Climate Positive 2040 commitment. The resolution acknowledges the scientific consensus that climate change is occurring and is driven by the burning of fossil fuels. City officials also stated in the resolution that changes in water systems and extreme-weather events are affecting Salt Lake City now and will be exacerbated in the future, according to North America Wind Power. "This is the most ambitious step ever taken by Salt Lake City to address the threat of climate change," Biskupski said in a press release. Climate Positive 2040 laid out four main pathways to achieve Salt Lake City's historic goal: But this new announcement takes the city's commitment one step further.

Hawaii is harnessing volcano energy to go 100% renewable. USGSA lava fountain at Pu'u 'O'o, a volcanic cone on the flank of Kilauea. 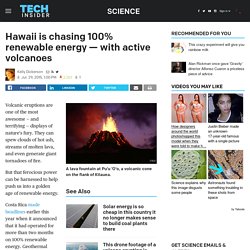 Volcanic eruptions are one of the most awesome — and terrifying — displays of nature's fury. They can spew clouds of hot ash, streams of molten lava, and even generate giant tornadoes of fire. But that ferocious power can be harnessed to help push us into a golden age of renewable energy. Costa Rica made headlines earlier this year when it announced that it had operated for more than two months on 100% renewable energy. Geothermal energy siphoned from active volcanoes made up a good chunk of that figure. Although Costa Rica probably can't maintain its renewable model long-term, it's still a huge achievement and demonstrates that converting to renewables is possible on a grand scale. Sweden is Now Recycling 99 Percent of its Trash. Here’s how. Portland Now Generates Electricity From Turbines Installed In City Water Pipes. Welcome to Auroville.

Uk.businessinsider. Giant Solar Floating Farm Could Produce 8,000 Tons of Vegetables Annually. The world is less than 40 years away from a serious problem: producing enough food for 9 billion mouths. 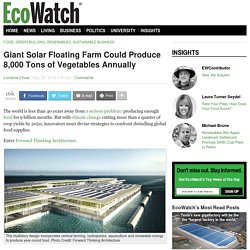 But with climate change cutting more than a quarter of crop yields by 2050, innovators must devise strategies to confront dwindling global food supplies. Enter Forward Thinking Architecture. 6 of the world’s most ingenious wildlife overpasses [PICs] This Community Is Transforming a Blighted Neighborhood Into a Vibrant Lab of Possibilities. Five ways UWM is changing the way we eat. Worried about where your food comes from? 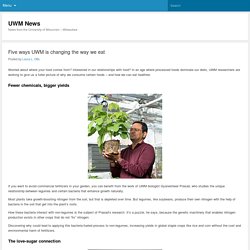 Interested in our relationships with food? In an age where processed foods dominate our diets, UWM researchers are working to give us a fuller picture of why we consume certain foods – and how we can eat healthier. Fewer chemicals, bigger yields.

Going down. The amazing system that tested the most powerful rocket engine ever. These giant pipes help keep an entire city safe.