Jared Diamond on why societies collapse 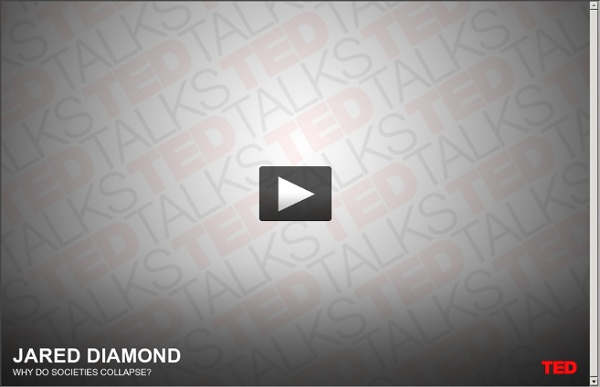 Five Manifestos for the Creative Life by Kirstin Butler How a numbered list can start a personal revolution. Some days everyone needs a little extra encouragement. We’ve long been fans of the amazing work of Frederick Terral, the creative visionary behind design studio Right Brain Terrain. You may not be a Picasso or Mozart but you don’t have to be. We can’t imagine more sound advice. Guidelines to get you from Point A to finished product, The Cult of Done Manifesto was written by tech guru Bre Pettis (of MakerBot fame) in collaboration with writer Kio Stark in 20 minutes, “because we only had 20 minutes to get it done.” Pretending you know what you’re doing is almost the same as knowing what you are doing, so just accept that you know what you’re doing even if you don’t and do it.” With iteration at the heart of its process, The Cult of Done Manifesto will banish your inner perfectionist (and its evil twin, procrastination). This is your life. There is an enemy. Even better, Do the Work is free(!) Donating = Loving

101 Timeless Lessons Life Teaches post written by: Angel Chernoff Email Take everything you’ve ever learned – all the crazy experiences and lessons – and place it all in a box labeled “Thank you.” What has life taught you? This is what our sister site, Everyday Life Lessons, is all about. What you do today is important because you are exchanging a day of your life for it.In life, you usually get what you ask for, but it rarely comes in the package you think it’s supposed to come in.Never let one bad day make you feel like you have a bad life.Just because today is a terrible day doesn’t mean tomorrow won’t be the best day of your life. Photo by: Hartwig HKD If you enjoyed this article, check out our new best-selling book. And get inspiring life tips and quotes in your inbox (it's free)...

Critical Thinking Worksite: Introduction I. Just What is Critical Thinking? When you hear "critical thinking", it is natural to think of criticism---that is, of unpleasant episodes involving your parents or your boss. One can think critically in episodes like these, but the term applies to many others as well. Critical thinking is evaluative thinking---it involves evaluating options for the purpose of reaching conclusions about those options. We can say a bit more about how it is intended to enhance your critical thinking ability. II. When your beliefs are at stake, it's time to think critically. At this worksite, we concentrate on argument analysis. Argument Identification: The first step in argument analysis is knowing that you are in the presence of an argument. In the next three sections, we develop each of these stages, exercising your mastery of them element by element.

The Art of Loving Yourself