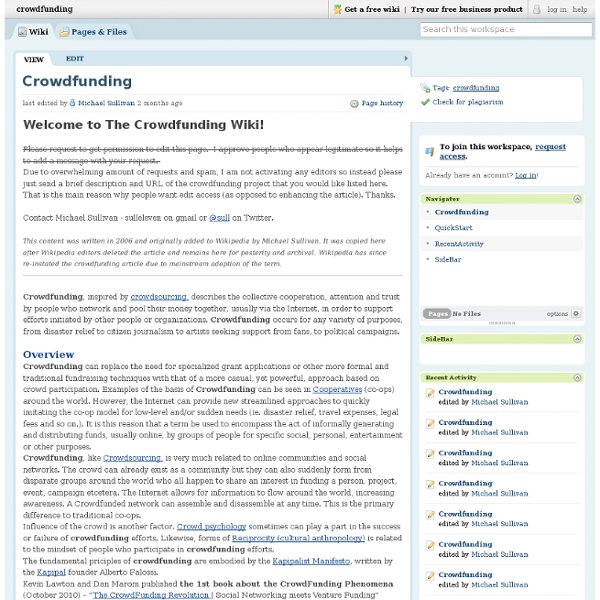 Please request to get permission to edit this page. I approve people who appear legitimate so it helps to add a message with your request. Due to overwhelming amount of requests and spam, I am not activating any editors so instead please just send a brief description and URL of the crowdfunding project that you would like listed here. Contact Michael Sullivan - sulleleven on gmail or @sull on Twitter. This content was written in 2006 and originally added to Wikipedia by Michael Sullivan. Crowdfunding, inspired by crowdsourcing, describes the collective cooperation, attention and trust by people who network and pool their money together, usually via the Internet, in order to support efforts initiated by other people or organizations. Overview Crowdfunding can replace the need for specialized grant applications or other more formal and traditional fundraising techniques with that of a more casual, yet powerful, approach based on crowd participation. Name (Global Alexa Rank)

13 Crowdfunding Websites to Fund Your Business Who needs banks? Crowdfunding websites can help you find a community of small investors to fund your business, without the risks of traditional financing. Here is a list of crowdfunding sites. Some sites focus on funding creative projects, others sites focus on meeting specific needs in the marketplace or community. 13 Crowdfunding Websites 33needs. 33needs enables everyone to invest, make a social impact, and earn financial rewards. Wide Angle » The Open Innovation Toolbox We often think of open innovation as one technique, when in fact it represents a range of techniques that serve different purposes. These techniques fall along a spectrum from the most open (anyone can submit any idea, the crowd selects the best) to the least open (pre-screened experts submit ideas on a specific problem, the company selects the best). Three choices determine which tool you end up with: 1) who to include, 2) what to ask, and 3) how to select answers. Answers to these questions will depend on your objectives: are you trying to boost engagement, solve an urgent challenge, or understand the most widespread customer needs? Jeffrey Phillips at Ovo Innovation recently built a typology of open innovation, based on different approaches to idea collection (who is asked and what they are asked). 1. 2. 3. 4. Just as idea collection methods vary, different evaluation and selection methods also serve distinct purposes.

9 crowdfunding websites to help you change the world. - Webdistortion For many people, the thought of taking significant financial risk holds them back from jumping head-long into launching the idea that has been stuck in the recesses of their head. This collection of sites are designed to take the risk out of that creativity and innovation, allowing even the little guy to do something amazing. Who needs venture capital funding to get their idea off the ground? If you’ve been holding back because of it, you might just find there’s help out there, fueled by the community, and managed by some of these fantastic sites, which can help you fund your idea, business startup or music project. KickStarter URL: KickStarter has received quite a bit of publicity recently for its efforts. As far as the rules for funding goes, KickStarter keeps things simple. RocketHub URL: Another very similar site to KickStarter is RocketHub. Edit. Quirky URL: Fundbreak URL: CatWalkGenius

How Much Does Ideas Management Really Contribute to Innovation? The crowdsourcing of ideas was the radical new approach to innovation a few short years ago and technology platforms to support idea generation and ideas management have been growing in popularity. There are, however, question marks over what they actually contribute to innovation. The world of ideas management c2010 In the early 2000s ideas management was still heady stuff. “Just imagine! Only a few years later, these once-“revolutionary” approaches have begun to seem tired. Today’s innovation managers are well versed in collaboration – they know exactly how to launch fresh ideation campaigns. When you take a hard look at today’s innovation methodologies and tools (including those we have developed at Imaginatik), it’s hard not to came away feeling unimpressed. Some of the drawbacks Can we afford to be brutally honest about such a young industry where supplier companies are still seeking their place and where customers believe they are at the edge of innovation practice? About the Author

Ideavibes™ - The crowd is speaking. Are you listening? Welcome to Appropedia Youcapital Art Limited Crowdfunded windmill will generate energy for members’ own use Gain instant and exclusive access to over 5,000 of the most creative ideas, innovations and startups on our database and use our smart filters to take you direct to those that are most relevant to your industry and your needs. Not interested? You can still browse articles published in the last 30 days from our homepage and receive your daily and weekly fix of entrepreneurial ideas through our free newsletters. Vencorps Crowd Backers (crowdbackers)

GreenXchange Above are just a few of the big ideas with big impact. Click on one for details, or there’s plenty more inside. Jan 23, 2011 | GreenXchange: Partners Collaboratory On January 11, 2011 the GreenXchange held an in-person Collaboratory that included attendance by Brooks, Nike, New Balance, Oregon based non-profits, the University of Oregon and University of Washington, and the U.S. Environmental Protection Agency. Jan 27, 2010 | Davos: Nike and Partners Launch The GreenXchange Nike formally launched the GreenXchange at a CEO breakfast in Davos. May 9, 2009 | Green Xchange: Creating a Meta-Map of Sustainability At the World Economic Forum last January in Davos, Nike, Creative Commons and Best Buy announced a new collaborative project that could change the rules of the game on sharing intellectual property. More news...