What Mobile Wallets And Smartphone Cameras Now Have In Common. Guess what? 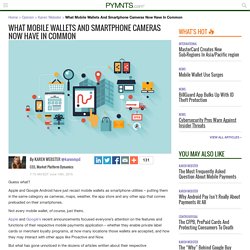 Apple and Google Android have just recast mobile wallets as smartphone utilities – putting them in the same category as cameras, maps, weather, the app store and any other app that comes preloaded on their smartphones. Not every mobile wallet, of course, just theirs. Apple and Google’s recent announcements focused everyone’s attention on the features and functions of their respective mobile payments application – whether they enable private label cards or merchant loyalty programs, at how many locations those wallets are accepted, and how they may interact with other apps like Proactive and Now.

But what has gone unnoticed in the dozens of articles written about their respective announcements is the subtle shift that they engineered from asking users to take an action and download an app to giving them a wallet app outright when they power up their phones. A toe up, perhaps, but I’m not convinced. Rebranding Passbook to Wallet was a pretty brilliant stroke by Apple.

Internet players. Apple Pay. VeriFone’s New Strategy (And It’s Not About Payments) As VeriFone looks out over the next decade in payments, it sees a world where terminals are as relevant as they are right now – with one big difference. 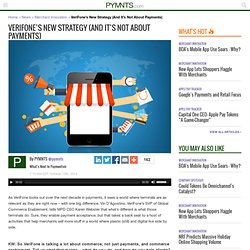 Vin D’Agostino, VeriFone’s SVP of Global Commerce Enablement, tells MPD CEO Karen Webster that what’s different is what those terminals do. Sure, they enable payment acceptance, but that takes a back seat to a host of activities that help merchants sell more stuff in a world where plastic (still) and digital live side by side. KW: So VeriFone is talking a lot about commerce, not just payments, and commerce enablement. Tell us what that means – what do you do, and how do you help clients? VD: Commerce enablement is one of our three global lines of business, and I think we’ve set a simple goal – just help our clients drive new revenues, either by enabling them to acquire new customers, or sell more products to existing customers.

To do this, we try to leverage our global franchise. Another example would be our taxi business. VD: Sure. Uber: The World's Most Profitable Start-Up? After weeks of speculation about Uber’s, well uber funding round, the final count is in, and its a monster. 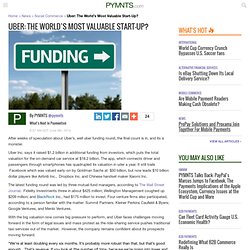 Uber Inc. says it raised $1.2 billion in additional funding from investors, which puts the total valuation for the on-demand car service at $18.2 billion. The app, which connects driver and passengers through smartphones has quadrupled its valuation in uder a year. It still trails Facebook which was valued early-on by Goldman Sachs at $50 billion, but now leads $10 billion dollar players like Airbnb Inc., Dropbox Inc. and Chinese handset maker Xiaomi Inc. The latest funding round was led by three mutual-fund managers, according to The Wall Street Journal. Fidelity Investments threw in about $425 million; Wellington Management coughed up $209 million; and BlackRock Inc., had $175 million to invest. “We’re at least doubling every six months. Powa Technologies snaps up ZNAP. By Scott Thompson Powa Technologies Group has acquired mobile outfit MPayM, the company behind ZNAP, in an all share deal valued at $75 million. 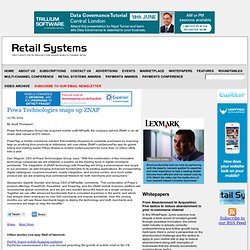 PowaTag, a mobile commerce solution that enables shoppers to complete purchases by scanning tags on anything from products to billboards, will now utilise ZNAP’s pbSecurePay app for global billing and mailing leader Pitney Bowes to enable instant payment for more than 23 billion utility bills a year. Dan Wagner, CEO at Powa Technologies Group, says: “With this combination of two innovative technology companies we will establish a position as the leading force in digital commerce worldwide. The integration of ZNAP technology with PowaTag will bring a phenomenal new scope to our provision, as well bringing enhanced functionality to its existing applications. HomeMore News Other stories you may find of interest: PayPal: Expect mobile shopping explosionPayPal has commissioned a five-year forecast projecting the growth of mobile retail in the UK. 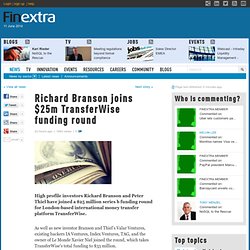 As well as new investor Branson and Thiel's Valar Ventures, existing backers IA Ventures, Index Ventures, TAG, and the owner of Le Monde Xavier Niel joined the round, which takes TransferWise's total funding to $33 million. The three year old startup uses peer-to-peer technology to match transfers in one currency to those in another, and sends the money from a bank account in the host country to the target account.

So far the platform has been used to transfer more than £1 billion, saving - claims the firm - users over £45 million in banking fees. TransferWise says it will use the money to continue its aggressive attack on banks and the "hidden fees" they charge for international money transfers.

Catalina Marketing and Catalina Health® Seamless. LevelUp is Down to Half Its Former Headcount, and Needs to Raise Money Fast.