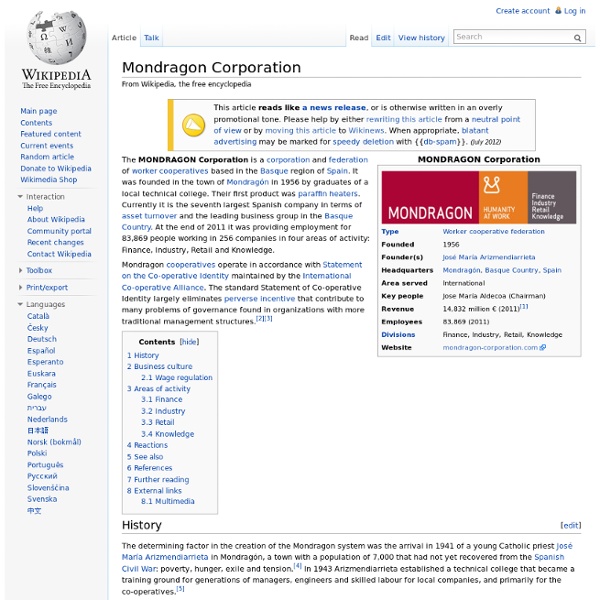 Mondragon cooperatives operate in accordance with Statement on the Co-operative Identity maintained by the International Co-operative Alliance. History[edit] The determining factor in the creation of the Mondragon system was the arrival in 1941 of a young Catholic priest José María Arizmendiarrieta in Mondragón, a town with a population of 7,000 that had not yet recovered from the Spanish Civil War: poverty, hunger, exile and tension.[2] In 1943, Arizmendiarrieta established a technical college that became a training ground for generations of managers, engineers and skilled labour for local companies, and primarily for the co-operatives.[3] Before creating the first co-operative, Arizmendiarrieta spent a number of years educating young people about a form of humanism based on solidarity and participation, in harmony with Catholic Social Teaching, and the importance of acquiring the necessary technical knowledge. The first 15 years were characterised by enormous dynamism. Finance[edit] Related:  Settlement of Mars • Global-scale funding/finance

Framework: Collaborative Economy Honeycomb Above: Version 1.1 of the Collaborative Economy Honeycomb Added new Airbnb logo Understand the Collaborative Economy market in one, single image. Please share widely, with attribution, non-commercially: Click image to see JPG version 3,600 X 2,250 The Collaborative Economy enables people to efficiently get what they need from each other. Similarly, in nature, honeycombs are resilient structures that efficiently enable many individuals to access, share, and grow resources within a common group. In this visual representation, the sharing economy is organized into six discrete families of goods, services, space, food, transportation and money. The companies listed in this graphic are just a small representation. Notable Industry Stats: One of the inspirations for this graphic was the work of friend and former colleague, Brian Solisdid, on the first phase of sharing, which originally catalogued social media as the Conversation Prism. The crowd is becoming like a company.

What A Detroit Supper Club Teaches Us About Co-Creativity A social movement is underway in downtown Detroit. Each month, 100 or so individuals pay $5 for admission to a loft, where they eat a dinner of organic soup (and other foods) prepared by volunteers. Diners share ideas and connections, hear presentations from artists who are working on projects aimed at improving the city, and then vote on which project will receive proceeds from the evening's dinner. In recent years, crowdsourcing has become a trendy tactic for soliciting input and engaging consumers, but in reality this approach is nothing more than an open call for submissions. Yesterday, businesses succeeded through industrial or technological expertise, with little need to converse with consumers. Marketers are beginning to understand that it's no longer viable to work in a vacuum, and that seeking consumer input by casting a wide net into an anonymous pool won't suffice. Sounds simple enough, right? Authenticity, authenticity, authenticity. [Image: Detroit SOUP]

Marcora Law The Marcora Law ­- Multiplying the employees’ stakes Italy’s Marcora Law (law 49/85) allows redundant workers to use their accumulated unemployment benefit to capitalise a buyout co-operative . It thus forms part of the welfare bridge from unemployment to self-employment. A summary of the Marcora Law’s provisions FONCOOPER, a fund for the general promotion of co-operatives CFI, a revolving loan fund invested in phoenix co-operatives employees’ investment matched threefold maximum of three years’ unemployment benefit can be capitalised corporate investors permitted up to 25%, providing networking support specialist monitoring and advisory body established €40m invested 89 businesses and 3,100 jobs saved (by end 1992) 10% failure rate of co-ops 5% of capital and jobs lost through failures The institutional set-up The Marcora Law was passed on 27 February 1985, and provided state backing for two funds to support co-­operatives. Encouraging risk­taking and adequate capitalisation References

Distributism - Wikipedia Doctrine in opposition to both socialism and capitalism Distributism is an economic theory asserting that the world's productive assets should be widely owned rather than concentrated.[1] It was developed in Europe in the late 19th and early 20th centuries based upon the principles of Catholic social teaching, especially the teachings of Pope Leo XIII in his encyclical Rerum novarum (1891) and Pope Pius XI in Quadragesimo anno (1931).[2][3][4] It views both capitalism and socialism as equally flawed and exploitative, and it favors economic mechanisms such as small-scale cooperatives and family businesses, and large-scale antitrust regulations. Some Christian Democratic political parties have advocated distributism in their economic policies. Overview[edit] Background[edit] The mid-to-late 19th century witnessed an increase in popularity of political Catholicism across Europe.[19] According to historian Michael A. Position within the political spectrum[edit] Economic theory[edit] Banks[edit]

Railroad Bonds website watertownhistory.org ebook History of Watertown, Wisconsin Railroad Bonds One of the most dramatic incidents in the history of Watertown is the story of the railway bond issues. In times ago there was a group of industrious individuals who had the fascinating habit of investing other people’s money. Encouraged by their previous success in Watertown the corporators of the Milwaukee and Watertown Road made an effort to get a second issue of bonds from this source. The bond question played a prominent part in the city’s politics for many years. During the following years, Watertown was literally without a government. One can find the legal history of this case in every law textbook in the land. The long tedious struggle resulted in a victory for the city, and a joyous celebration was held at which many of the bonds were burned in public. It retarded Watertown’s growth, once one of the largest and most promising communities in the state. Our Railroad Bonds Have Ruined Us Messrs. J. Index

The Harlem Project Back in 1990, Geoffrey Canada was just your average do-gooder. That year, he became the president of a nonprofit charitable organization based in Harlem called the Rheedlen Centers for Children and Families, and he set out trying to improve the world, one poor child at a time. It was a bad moment to be poor in New York City. Harlem, especially, was suffering under the simultaneous plagues of crack cocaine, cheap guns and rampant homelessness, and Canada's main goal at Rheedlen, in those years, was to keep the children in his programs alive. The organization had an annual budget of $3 million, which it spent on a predictable array of services in Upper Manhattan: after-school programs, truancy prevention, anti-violence training for teenagers. The programs seemed to do a lot of good for the children who were enrolled in them, at least in part because of Canada's own level of devotion. Canada knew there were success stories out there.

A new trend line for global banking After climbing for 30 years, the share of economic activity attributable to bank revenues fell in the wake of the global financial crisis. Looking forward, revenues could flatline at about 5 percent of GDP through 2020 (exhibit). In fact, that’s our base scenario for the global banking industry—one that implies growth at the same rate as nominal GDP, following the pattern of other industries. In developed markets, factors contributing to this trajectory include deleveraging and stiffer regulatory regimes that will require higher bank-capital ratios. Exhibit Banking’s growth as a share of global economic activity may be leveling off. Enlarge About the authors Miklos Dietz is a principal in McKinsey’s Budapest office, where Tamas Nagy is a consultant; Philipp Härle is a director in the London office.

Escrow - Wikipedia This article is about an escrow of money. For escrows of computer source code, see source code escrow. An escrow is: The word derives from the Old French word escroue, meaning a scrap of paper or a scroll of parchment; this indicated the deed that a third party held until a transaction was completed.[2] Types[edit] Escrow generally refers to money held by a third-party on behalf of transacting parties. purchases of a second hand car, where the money may be released at the end of a warranty perioddeposits for a property rental, where the money is released after the tenant moves outprovision of construction services, where the money may be released when the building work is complete to a defined standard, or when defined parts of the work are complete. Internet escrow[edit] Internet escrow has been around since the beginning of Internet auctions and commerce. Bogus escrow methods have been employed online. Banking[edit] Escrow is used in the field of automatic banking and vending equipment.