Norwegian Wood, AART architects. The vision behind Norwegian Wood is to create the largest and most sustainable wooden building complex in Northern Europe with a view to positioning Norway internationally and Stavanger as a pioneer city in the field of modern wooden architecture. 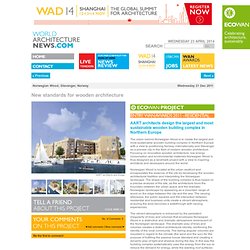 Focusing on innovative wooden architecture, low energy consumption and environmental materials Norwegian Wood is thus designed as a landmark project with a view to inspiring architects and developers around the world. Norwegian Wood is located at the urban seafront and encapsulates the essence of the city by developing the wooden architectural tradition and interpreting the Norwegian landscape. The shape of the building complex is thus based on a precise analysis of the site, as the architecture blurs the boundary between the urban space and the dramatic Norwegian landscape by appearing as a mountain range of wood on the edge between the city and the sea. 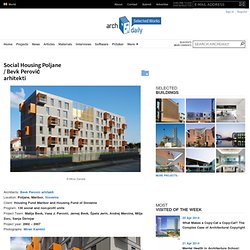 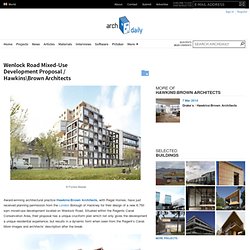 Situated within the Regents Canal Conservation Area, their proposal has a unique cruciform plan which not only gives the development a unique residential experience, but results in a dynamic form when seen from the Regent’s Canal. More images and architects’ description after the break. The Wenlock Road development consists of 10 storeys, comprising 4,650 sqm residential units, and 1,190 sq m commercial units located at street level. Residential 2013. The Los Angeles region is notorious for its lack of urban public space; Formosa1140 addresses this condition by radically parcelling out a third of its privately-owned building site as a publicly-managed pocket park for the City of West Hollywood. 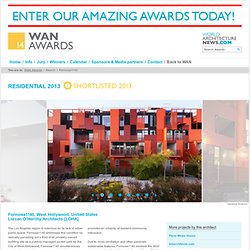 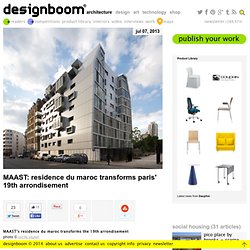 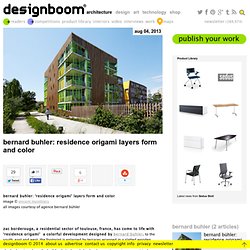 Housing Estate Proposal / Mikolai Adamus & Igor Brozyna. Designed in an undeveloped plot in Gdynia, Poland, the housing concept by Mikolai Adamus and Igor Brozyna is based on the idea of tissue as group of elements cooperating with each other. 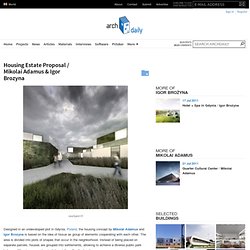 The area is divided into plots of shapes that occur in the neighborhood. Instead of being placed on separate parcels, houses are grouped into settlements, allowing to achieve a diverse public park between. More images and project description after the break. Typical building types of the neighborhood are single family-houses or small multi-family houses with private gardens. In this proposal, each plot is given different function and character, but they form a consistent whole. Coral City / GOMMA Design.

Rome based architecture and design firm GOMMA Design has submitted one of their latest projects, Coral City, a self-sustaining and disaster-resistant eco-village in the Philippines, submitted for the DAtE competition. 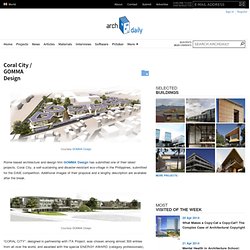 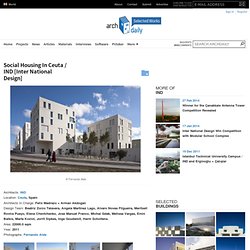 Addressed to disadvantaged citizens and -as expected in most social housing projects- it had a tight budget. Connecting Riads Residential Complex / AQSO Arquitectos. Iceberg, Editorial. The end is on the horizon for Iceberg, a jagged residential community in Aarhus by an impressive collaborative including CEBRA, JDS/Julien De Smedt Architects, SeARCH, Louis Paillard. 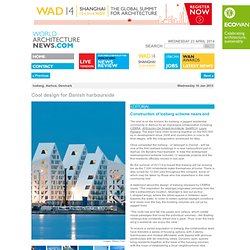 The team have been working together on the 800,000 sq m development since 2008 and construction is now in its final stages, with the inauguration scheduled for May. Once completed the Iceberg - or Isbjerget in Danish - will be one of the first realised buildings in a new harbourfront port in Aarhus: De Bynære Havnearealer. In total this widespread redevelopment scheme includes 12 separate projects and the first residents officially moved in last year. By the summer of 2013 it is hoped that Iceberg will be buzzing too as the 7,000 inhabitants make themselves at home. There is also scope for 12,000 jobs throughout the complex, some of which may be taken by those who live elsewhere in the new community hub. “CasaNova” Social Housing / cdm architetti associati. Terrace 9 Housing Complex / Atelier Zündel Cristea.

The competition winning proposal for the Terrace 9 Housing Complex in Nanterre, France by Atelier Zündel Cristea aims to restore the human scale and legibility necessary for creating large and enjoyable public spaces, capable of attracting people from beyond the city and the Hauts de Seine region. They do this by taking into account the urban project’s varying relief, both natural and artificial, with the coexistence of road and rail transportation networks and the structures of colossal scale such networks required.

The blocks are laid out perpendicular to the coast and the mountainside on which they are built, with their longest façades facing east and west. The building we designed and built is located on one edge of the site and, like the others, was governed by the terraced volume established by regulations for the building outline. Media for Spittelau Viaducts Housing.