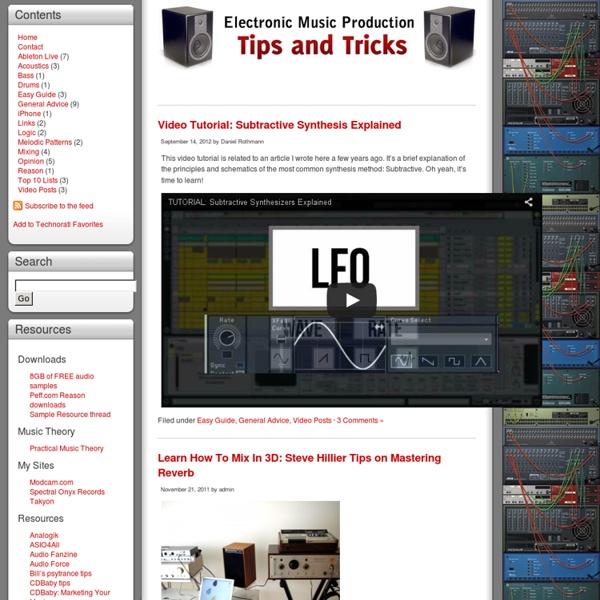 Hands up who likes analogue synthesisers?! Of course you do; there’s dozen of models out there and the best thing is, they’re all different. That might seem strange at first glance because when you examine them, most models appear to be basically the same. My Roland SH101 has one oscillator, one filter, one envelope generator and plays only one note at a time. Put that next to my Yamaha CS10, which is nearly exactly the same in terms of sound making facilities, and everyone except a guitarist would tell you they’re different, as different as a grand piano and a Yamaha DX7 (and the SH101 sounds far better in my opinion). And as every synth sounds different, each is unique.

What is a Chorus Effect? A chorus (or ensemble) is a modulation effect used to create a richer, thicker sound and add subtle movement. The effect roughly simulates the slight variations in pitch and timing that occur when multiple performers sing or play the same part. Chorus is a common guitar pedal effect that gives a clean electric guitar a "dreamy" quality. It's also widely used on acoustic guitar, electric piano, and clavinet. On strings and synth pads, chorus creates a richer, more complex sound. Stereo chorus effects also can be used to widen a stereo image.

Adventure Kid » AKWF Waveforms (Free) All in one pack! You probably want to download one of the all in one pack. It contains all the single cycle wave forms. The wave format work with many samplers and synths and there are some packages containing samples formatted for ones that need a different format. 30 Best Quotes in Pictures of the Week - Aug 5th to Aug 11th, 2012 1. ”Put your hand on a hot stove for a minute, and it seems like an hour…..” – Albert Einstein 2. ”When you can’t smoke” – Rory Sutherland 3. ”Death does not concern us…” – Epicurus Understanding Sends, Auxes And Buses « Audio Geek Zine Let’s talk about using sends to control effects, parallel processing and some of the other benefits of sends. First we need to understand a few concepts. Buses, auxes and sends. What is a Bus?

Phaser (effect) A phaser is an electronic sound processor used to filter a signal by creating a series of peaks and troughs in the frequency spectrum. The position of the peaks and troughs is typically modulated so that they vary over time, creating a sweeping effect. For this purpose, phasers usually include a low-frequency oscillator. Spectrogram of an 8-stage phaser modulated by a sine LFO applied to white noise. The electronic phasing effect is created by splitting an audio signal into two paths. Amazing Guitar Skills - YourDailyMedia.com - StumbleUpon Categories November 22, 2011 8:00pm By Rowdy Joe Upward Compression Using Multiband Dynamics Upward compression is another one of those techniques that most producers don’t know about or think about, but can be really effective in certain circumstances. This Ableton Live tutorial shows how to use Multiband Dynamics to bring up the low volume parts in a bus with multiple sounds, instead of cutting down the peaks. If there’s a quiet sound in a track or bus that you want to bring up and bring forward, upward compression can be a more effective way of helping it pop out versus bringing down the peaks with traditional compression. If you don’t know yet what upward compression is, see this tutorial to find out how it can help you out in your mixes. Like normal compression, it’s important not to overdo upward compression.

7 Obscure Mixing Techniques Used by the Pros Most of the time there is an obvious choice. Need more mid-range? Grab an EQ and boost the midrange.