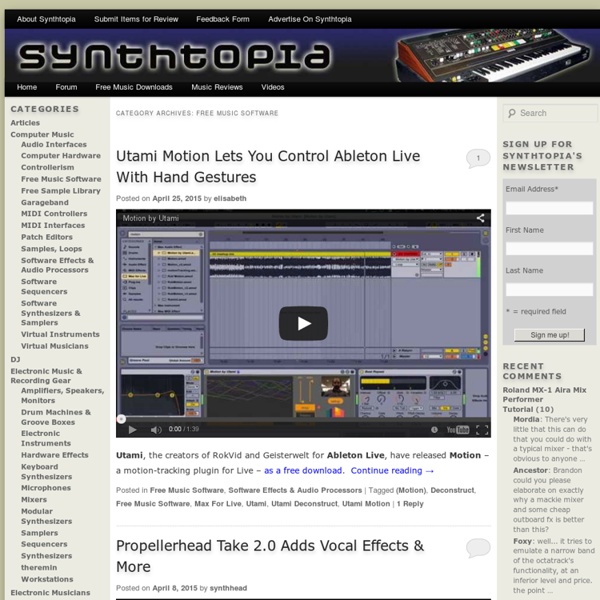 Utami, the creators of RokVid and Geisterwelt for Ableton Live, have released Motion – a motion-tracking plugin for Live – as a free download. Continue reading Propellerhead has released Take 2.0, a major update to its free vocal recorder for iPhone. Here’s what’s new in Take 2.0: Continue reading Apex Audio has released a free plugin, for Mac & Windows, Haa5. Haa5 uses stereo delays to create what is known as the “precedence effect”, also known as the “Haas effect” after Helmut Haas, whose 1949 Ph.D. thesis first described this psycho-acoustic phenomenon. Sinevibes has introduced Zap, a ‘unique mini-synthesizer’ controlled by incoming audio. It starts with an envelope follower that tracks the peak energy of the sound and then applies it onto the frequency of a monophonic oscillator. Puremagnetik has released Frequencizer – a fixer filter bank for Ableton Live + Max For Live. Developer Matthias Frick let us know that MIDI LE for Windows is now available as a beta. Continue reading

A hand possessed! New finger stimulating device will help wannabe musicians learn their favourite tunes By Daily Mail Reporter Updated: 07:10 GMT, 23 June 2011 If you've ever tried to learn the guitar or violin, moving your fingers just right can sometimes prove difficult. Now an invention by a group of Japanese scientists could teach you how to mimic your favourite tunes - even if you have no talent. The PosessedHand is an electronic device that stimulates the muscles on your forearm that move your fingers. HandPossessed: The Device stimulates muscles in the forearm to produce movements in the fingers and could be used by wannabe musicians JamStudio JamStudio for 2021! Download the Windows App or Mac App to keep using JamStudio! DO IT NOW! This app will work after Flash is removed from browsers in 2021! Windows AppMac App Thanks for using JamStudio.

Antares Auto-Tune Evo Pitch Correcting Plug-In Click image to view full size version The Worldwide Standard in Affordable Professional Pitch Correction If you need Auto-Tune's world standard pitch correction, but not Auto-Tune 7's time manipulation or other new features (click here for a quick comparison of Auto-Tune features), then Auto-Tune Evo is the plug-in for you. Audiotool Songbird EQ Chart « ObiAudio This is from a thread on Future Producers..I did not write this and do…to an extent…agree with most of this. I just copied and pasted the good stuff: To understand EQ and its intricacies you need hands-on experience, but to help you get started, here’s a table of general uses and the different ranges that EQ can affect.

Rockbox Player Firmware ZED60-10FX - Allen & Heath Live or in the studio, ZED60-10FX is an ultra-portable mixer for solo artists and small bands. Based on our top selling ZED-10FX, the new ZED60-10FX adds premium quality 60mm faders for that intuitive, tactile mixing experience. This mixer is a guitarist’s dream. Two of the 4 mono channels have high impedance jack inputs that can take a normal line level or a low level input from a guitar pickup, so guitars can be plugged straight into the mixer without the need for DI boxes. Sound Chopper 2 V2.0 Sound chopper 2 is a stand alone application built in Max/MSP. Sound Chopper 2 features a granulator, stretcher, pitch shifter, slicer and tremolo, panner, bit crusher, 8 different delays (mono and stereo) and 8 filters. Those parameters can also be automated over time so you won’t need to touch 20 knobs all at once. All the parameters are midi compatible, also you can use your webcam as an xy pad, just grab a blue object and the software will track the position, also if you own a motion leap controller you can map the values to the position of your hand.

Making music in Linux and beyond You can do a lot with free open-source software, also known as FOSS. Musicians with a yen for Linux are in luck; the array of choices for creating, editing, producing, and publishing music using nothing but FOSS software is staggering. One way to get your hands on a plethora of audio tools is to run the Ubuntu Studio distro, which comes preconfigured for real-time audio processing and includes every studio tool under the sun. Failing that, there are the ubuntustudio-audio and ubuntustudio-audio-plugins virtual packages in Ubuntu, which will install 54 and 18 specialized packages, respectively. Other alternatives include the Musix distribution and the low-end hardware distro dyne:bolic, but Ubuntu Studio has the largest toolkit in the genre and enjoys the widest support as well.

Recording in Ubuntu Linux (aka Free and Open Source Digital Audio Workstation) Editors Most of these toolbar buttons should be familiar to anyone that uses multitrack and sequencing programs, but the editors deserve a little extra explanation. Editors The matrix and percussion editors are your standard sequencer style editors. Rosegarden also has a standard, western music notation editor that you can print to pdf or postscript. Making Music(Beats) on Linux/Ubuntu with Hydrogen I am going to review a couple of Music Making Softwares for Linux and am starting with the simplest and one of the best!HYDROGEN. Hydrogen basically is a pattern based drum programming software which in layman terms means, it allows you to make your own beats.And in case you aren't much into music, you might be wondering “what the hell will i do with this piece of software”...well here is a word from my friends who've tried this: “Its pretty fun playing with this software, n even without knowing much, you could actually MAKE SUM MUSIC!!!”

Learn Mastering Technique in Free Videos: Limiting, M/S, Dubstep Bass Mastering to me is a bit like applying stain to wood: done correctly, it brings out the definition of what’s there rather than covering it up. But making mastering effective is a really special art. Danny Wyatt, a veteran mastering engineer now working as an instructor with Dubspot, has some serious credentials both on the mixing and mastering side and as an educator. He’s worked with a range of artists over the years (Wax Poetic featuring Norah Jones, Curtis Mayfield, Thievery Corp., the Roots, Ultra Records, and Mos Def, to name a few). But he also doesn’t mystify his knowledge: he’ll tell you straight what he believes, both face-to-face and as a teacher.

Crafting New Twisted Tools: A Chat with Reaktor Patchers Making New Sonic Instruments Ed. Twisted Tools are a special breed of music software makers, concocting wild-sounding instruments, sequencers, and effects, all with a distinctively-colorful and graphical approach to interface design. And they do all of this in Reaktor, Native Instruments’ deep toolbox for visual development of soundmakers, a patching cousin to tools like Max/MSP, Pd, and Plogue Bidule. Various patchers take a DIY approach to building musical tools in such environments, but Twisted Tools have successfully turned those creations into a business.