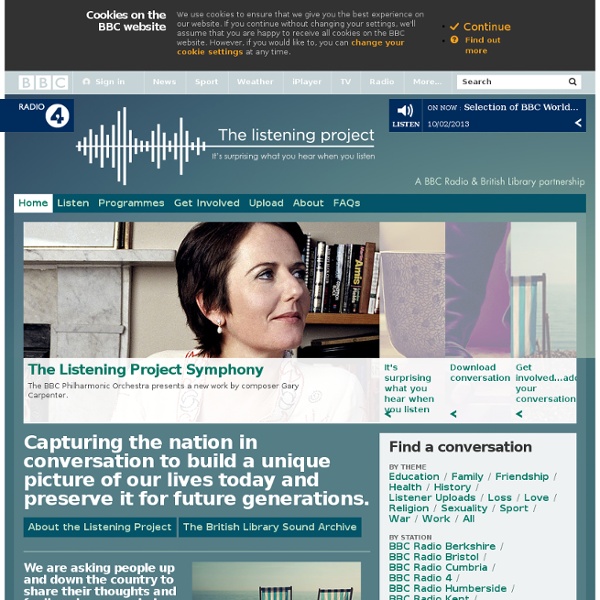 LoudLit.org I am nothing On a scale of one to ten, how good of a cog are you? How well do you function in your assigned role? How much of a man or woman are you? How do you know? This is, of course, the path of insanity, and not the good kind of insanity. What will you do if you're too tough to be a good woman, too sensitive to be a good man, too selfish to be a good husband, too lazy to be a good employee, too shy to be a good friend, too caring to be rational, too fat to be pretty, too effeminate to be straight, too introverted to be a good leader, too smart to be kind, too young to be taken seriously, too old to make a difference, or too far behind to even get in the race? These are all false standards and false dichotomies, but they are so common and so ingrained that we sometimes believe in them without even realizing it. That is all so exhausting. I am nothing. But I am nothing, and so I am finally free to be myself. This isn't license to stagnate.

Podcasts and Downloads - The Listening Project Third Coast International Audio Festival :: COMPETITIONS :: ShortDocs :: 2015 Here's your chance to take part in an international audio mega-project, whether you've been making radio for decades, or have always longed to utter "Testing 1, 2" into a microphone. The ShortDocs Challenge is for everyone! UPDATE: the ShortDocs are in, over 150 *studly* specimens! The 2015 ShortDocs Challenge: STUDS RULES As always, ShortDocs comes with a set of rules inspired by a creative partner. Terkel's work spanned an impressive variety of topics and figures - but his recordings have been largely inaccesible to the public. We hope you'll be energized by Terkel's interview style, spirit, and wild curiousity - and then head in any direction you see fit. studs rules...rules Your radio story must: - be two to three minutes in length - be titled with a question that begins with one of the five Ws (who, what, when, where or why) - contain the question "And what happened then?" The deadline for submitting your ShortDoc is 11:59pm CT on Tue, April 14th. MORE ON the rules studs says: Questions?

non duality - Never Not Here | Last place you'd ever look, standing right on top of it? British Library-BBC ‘Listening Project’ conversations go online | The Oral History Noticeboard This week the BBC are uploading the first 355 Listening Project conversations to the British Library Sounds website at It’s an exciting moment because it means that for the first time these recordings will be available in their entirety for anyone to listen to from anywhere in the world. The Listening Project is a collaborative project between the BBC and the British Library, modelled on the US StoryCorps project. Producers from regional and national BBC radio stations have, since the beginning of 2012, been recording people talking to each other about a topic of their choice, often something that they have been wanting to discuss but never found the time to sit down and really talk about. There is a great variety in participants and topics of conversation. The oldest speaker is Anne Howie, aged 95, who talks to her grandson Andrew about her memories of growing up in Glasgow during the Second World War. Like this: Like Loading...

non duality - Here-Now-TV: Unmani This Satsang with Unmani took place at the 17. Rainbow Spirit Festival 2010 in November 2010 in Berlin. Watch video part 1 Meeting in not knowing, the opposite of what mind wants; your true nature – not to know; all what is, is absolutely complete; mind will never be satisfied – that is its nature; the only relaxing to recognize, that this is the nature of the mind; mind imagines that there is somebody who lives a life; the idea that all experience is happening to “me” is the idea of mind; we take mind very serious; the perfect state that you imagine, which always is in the future; the perfect state is always here; mind can never understand this; it all simply happens, each perception, without story, which mind creates; start trusting in what is beyond mind. Watch video part 2 Watch video part 3 Watch video part 4 As MP3 audio Watch the video via YouTube