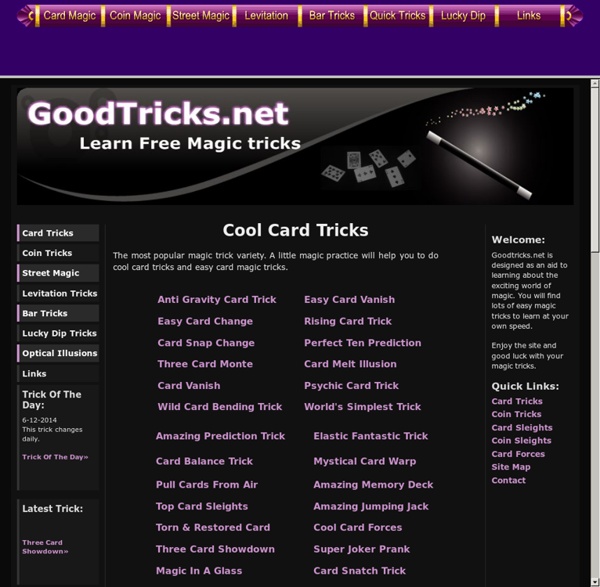 Learn Criss Angel Style Magic Tricks "Awesome, you're a great illusionist!" Criss Angel is a great entertainer, performing many stunning illusions. Here are some great Criss Angel style coin tricks that look like real magic! THE EFFECT: You place any coin on the palm of your open hand, giving a magical snap, it vanishes into thin air! Watch the effect, then learn it! Do you want to own all my tutorial videos? THE SECRET: Ok, ok the saying "nothing up my sleeve" does not apply here! Be warned the 'flick move' does take some practice. To achieve a good 'flick' place the coin on your palm and your middle finger and thumb (of the other hand) in a clicking position above and in front of the coin. As you click your fingers allow the finger to strike the coin. When you have finished the trick you can push both of your sleeves up, the coin will be taken up too in the fabric. Needless to say when performing this trick you need to wear long sleeves that are quite baggy, otherwise you will never pull it off!

Multiple Choice Zombie Apocalypse Survival Game | Choice of Zombies You really aren't awake yet. You never are until at least your second cup of coffee, and this is only your first. You're having a hard time getting your eyes to focus. A human leg. The man gnawing on the human leg suddenly stops chewing, as though some sound disturbs him. You've heard about the outbreak in Millbury, of course. But it seems the newscasters were at least a little right, because there's a zombie chowing down on a human leg in your front yard. Shit.

Bullet Catch History Deaths Houdini Dorothy Dietrich Chung Ling Soo Penn & Teller Southern Ghost Stories, Folktales, Storytelling: The Moonlit Road.com The H.P. Lovecraft Archive 101 Short Stories that Will Leave You Smiling, Crying and Thinking post written by: Marc Chernoff Email Since its inception eighteen months ago, our sister site Makes Me Think (MMT) has truly evolved into a remarkable online community. Every day, users share their thought-provoking life stories and vote on stories that other users have shared. As stated on the MMT About page, sometimes the most random everyday encounters force us to stop and rethink the truths and perceptions we have ingrained in our minds. I believe the 101 stories listed below perfectly fulfill that description. What do you think? How the Necronomicon Works" Weird fiction author H.P. Lovecraft created a mythology that includes bizarre monsters, troubled communities, insane scholars and a library of books filled with forbidden lore. Of all the books detailing this mythology that Lovecraft mentions in his fiction, one in particular captures the imagination more than any other: the "Necronomicon." According to Lovecraft, it's a tome filled with secrets and rituals that can drive a reader to the brink of insanity. In reality, the "Necronomicon" doesn't exist, though more than a half dozen books with the title "Necronomicon" are available at bookstores. The "Necronomicon" plays an important role in the Cthulhu mythos -- the mythology behind much of Lovecraft's work involving extraterrestrial beings of immense power. Lovecraft tells us that the author of the book was the mad Arab Abdul Alhazred, who perished in A.D. 738 after being eaten by one or more invisible monsters. So what's in this book?

15 Bogeymen From Around The World Creepy The bogeyman is a legendary ghost-like monster. The bogeyman has no specific appearance and conceptions of the monster can vary drastically even from household to household within the same community; in many cases he simply has no set appearance in the mind of a child, but is just an amorphous embodiment of terror. This list looks at 15 bogeymen from around the world. The Namahage visits each house on New Year’s to ask if any misbehaving children live there. If the parents are able to report that their children are not lazy and do not cry, he moves on to the next house. The Korean bogeyman is called Kotgahm, which is the word for persimmon. Duérmete, niño, duérmete ya. If you think of a coconut as a head, with the three holes the features of a face, you can see how El Coco might be transformed in the mind of a child to a hairy little man. There are many theories about the origin of the word “bogeyman.” Czech Republic and Poland The Bolman has claws and fangs. Jamie Frater

Ancient d20 die emerges from the ashes of time | Crave Let's go back in time. Way back. Keep going. OK, stop. You're in the Ptolemaic Period. The Metropolitan Museum of Art owns what may be the world's oldest d20 die. The die is a little over an inch tall. The symbols for eta, theta, and epsilon can be clearly seen. (Via io9)