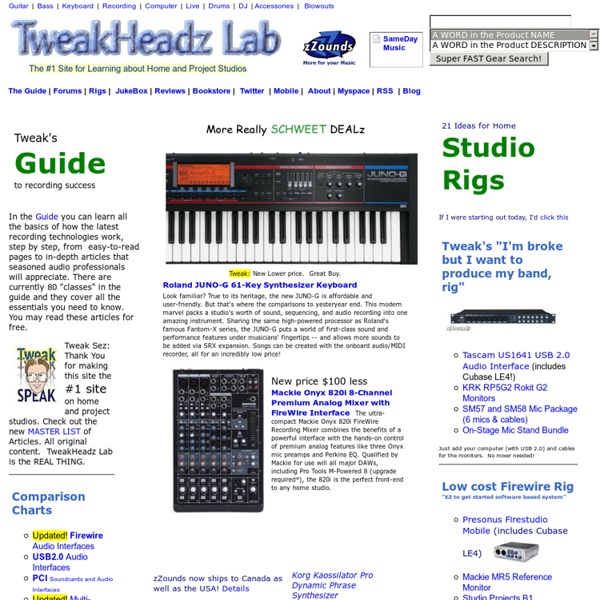 FL Studio Tips, Tricks, and Secrets Posted by ZXX on 2004-12-25 12:43:09 Do you struggle to find that swishing sound for the background in your tracks or you want to find that right explosion effect? Why spend your time looking for certain samples and effects on the internet when you can create the sample you desire with what you got in the libary combined wit effects, tweaks, and minor adjustments.

Music Theory for Musicians and Normal People by Toby W. Rush NEW (8 April 2016): Music Theory for Musicians and Normal People is now available in three new languages: Basque, Brazilian Portuguese, and Russian! Sparky the Music Theory Dog is on Twitter and Facebook! Vintage On The Cheap There's no doubt that these days software is king. And why not? It costs a fraction of what hardware does, the sound quality is improving all the time, and you can literally fit your entire studio in a laptop bag. But for all its distinct advantages, there are some areas where software falls short for synth geeks. It's not really collectable. It has a far more limited lifespan than hardware given how quickly operating systems change.

Sounds and Success While many studios are still using Pro Tools 8 and Accel cards, Avid announced the availability of Pro Tools 10 and the new Pro Tools|HDX DAW systems. According to Avid, Pro Tools 10 represents “a gigantic leap in sound and speed,” … You can’t log on to Twitter without seeing an artist or producer with 0 placements claiming to have just cooked up a “hit.” What exactly is a hit song? Although some of what makes a song popular can’t be measured, HitSongsDeconstructed.com has … [Written by Ian Clifford. FL Studio Tutorial - Pattern Window and Step Sequencer Basics In this FLStudio Tutorial we will explain the Pattern window. The pattern window is pretty much the starting point for almost every type of project you will involved with. Any sound that you need to use inside FLStudio from VST to sample to built-in FLStudio generator can be accessed from the pattern window. Your workflow might vary from other people, but we'll go through some very basic steps on the ways to get sounds into the pattern.

Virtual DJ: how to mix Virtual DJ is a great software for learning how to DJ with digital music files like MP3s. Here, I'll take you through the basics of mixing. You'll still need practice, but this should get you started. Making a Convincing Melody with Sampled Orchestral Strings When it comes to MIDI orchestration, the string section is probably the most difficult to emulate. That is because it, even though the strings are probably one of the most homogenous sections of the orchestra, it has some characteristics that are extremely hard to produce via samples. First of all, the strings are bowed instruments. This means that the musicians use a bow to produce the tones.

Impaktor Drum Synth Now Available Beep Street Impaktor - a iOS drum synthesizer that turns any surface into a playable percussion instrument. – is now available. Impaktor works by capturing real acoustical impulses from the built-in microphone and using them as an excitation source for advanced sound modules that simulate the behavior of membranes, cymbals, metallophones or strings. This makes Impaktor a highly responsive and expressive instrument. With semi-modular architecture and several types of synthesis, Impaktor can produce a wide range of tones, from acoustic, like Tabla, Djembe, Marimba, Cymbals, Metal bars to electronic or industrial sounds. Music Mixing Tips and Articles Sharpen your music mixing skills with the knowledge and techniques you'll discover below. The art of the great mixdown can seem at times like magic, and indeed it does involve some pretty subtle manipulations and cunning aural trickery. The real secret as you probably know by now is no secret at all: only knowledge and practice will improve your game. Knowledge and practice act as the two pillars upon which your mixing abilities rest. You should therefore always strive to learn more about the gear you use and add new techniques to your audio mixing skillset. The mixing knowledge we share with you below will provide you with insights and techniques to apply to your own work.

Sytrus - Basics of FM Tutorial Basics of FM Synthesis Most of today's software synthesizers use a process known as 'subtractive synthesis' - a spectrum-rich oscillator (saw, square, triangle, etc.) is processed with a low-pass, band-pass, or high-pass resonant filter to produce the final sound. FM (Frequency Modulation) uses a different approach - pure tones (sine waves) processed in such a way that additional harmonics are created (one sine wave modulates the frequency of another) and added to the signal to produce the final sound. Unlike sub-synths, the basic module of the FM synth is called an 'operator', which includes a pure tone oscillator (sine wave) and an articulation section. At the basic level the articulation section is at least a simple ADSR volume envelope. FM synthesizers contain two or more operators (Sytrus supports up to six operators).

Practical Ways to Integrate Your iPhone into Music Making to Do Awesome Things Cheap You're absolutely right. But you realize that the original source for music that Tycho and other electronic artists make are ... well, made digitally, right? So no matter what, the "vinyl sounds better b/c it's analog" argument people make, unless the source is actually analog, is just silliness. A high resolution wave file that's been mastered and engineered properly will sound the same coming out of a record as it will being played off a CD. The 10 best lectures on electronic music ever; watch them now Thanks to the wonders of the internet, one’s quest for knowledge really has no limitations. Between the plethora of digitized articles, documentaries, and—on the technical side of things—instructional videos and guides around, there is no shortage of information accessible to those who seek to learn more about the ever-expanding world of electronic music. The lecture, however, makes for a unique form of information sharing as it not only provides the necessary facts and details, but also allows for attendees (and, eventually, viewers) to get a sense of the person behind these facets of knowledge. With that in mind, Beatport News has compiled what we believe are 10 amazing lectures on electronic music, gathering videos from modern innovators, dance music originators, technical wizards, and a few that simply capture a time and place in electronic music too perfectly to overlook.