The Home of the Turntable 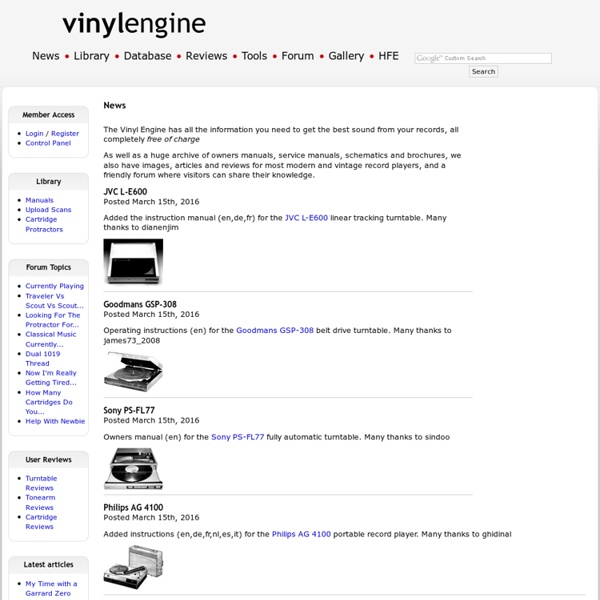 DIY Record Cleaning Solution and Brush? <a href=" ><img src=" border="0"></A> ; Site Map / Direct Links <a href=" ><img src=" border="0"></A> ; Vinyl Heaven 2 - Cartridges & Setting Up - Alignment, Protractors, Tracking Force, Phono Pre Amps etc Vinyl Heaven 2 - CARTRIDGES AND SETTING UP THE TURNTABLE There still are many good cartridges available on the market that will suit the precision close tolerance, low-medium mass arm of the Technics SL-1200 very well. Some of the top cartridge manufacturers include Audio Technica, Goldring, Ortofon, and Shure. Remember to completely avoid cartridges intended for DJ use - particularly those with spherical stylus tips that have very high tracking weights of over 3 grams. For hi-fi use only cartridges that employ elliptical, or the more expensive fine-line, tips should really be considered. Tracking weight should be around 1.5 to 2.0 grams. The cartridge I use is the Audio Technica AT120E which provides really superb performance at reasonable cost. Another fine cartridge choice could well be one of the excellent Ortofon Super OM series (reported as discontinued) or the newer Ortofon 2M range such as the 2M Red. Manufacturers websites: Cartridge Alignment – Important for minimising distortion

AR Turntable Vinyl Nirvana Acoustic Research Merrill Thorens For Sale LP Gear,turntable stylus,turntable needle stylus,turntable belts,turntable cartridge needle stylus,phono cartridge,headphones,record cleaning machines,record to digital Protractor User Guide | Aligning Cartridges with Baerwald, Loefgren & Stevenson | Vinyl Engine Phew, so many protractors in the set-up tools section !!! Which one I should use? In fact, it depends on the Turntable / Tonearm combo you’re using… Some of the protractors posted on the Vinyl Engine are specific, some of them are generic. Baerwald? Which is the best? I won’t tell you there is one better than the others. Simply, the equation you need to solve to find optimal alignment is undetermined: there are too many unknown parameters. Baerwald The distortion at the beginning, the middle (where it’s high) and the end of the record must be equal Loefgren Alignment must minimize the distortion across the record Stevenson Distortion is more important at the end of the record so let’s minimize it by assuming a null point at the end of the record, i.e. at 60.325 mm (IEC standard end of the record) What is a null point? The path of the stylus follows an arc. Conclusion: null point pairs (measured from the centre of the record) are different because of the added constraints: Now, Stevenson.

Resurrect your old recordings | Audio Restoration | Brian Davies Play it again: The firm saving vinyl Media playback is unsupported on your device Whether gathering dust in your loft or currently spinning on your turntable, it's a fair bet that at least some of your vinyl records came from a small factory in the Czech Republic. The facility in question is the headquarters of GZ Media, based in the small town of Lodenice, 25km (16 miles) west of the Czech capital, Prague. GZ is today the world's largest producer of vinyl records, of which it expects to press 30 million this year, for everyone from the Rolling Stones and U2, to Lady Gaga and Madonna. The success of the company is a far cry from the early 1990s, when vinyl records appeared to be on the way out, with music fans having switched en mass to compact discs. Back in the early 1970s more than three-quarters of album sales were on vinyl, but by the 1990s that had plunged to just 1.5%. "In 1993 our output was at its lowest, vinyl was almost dead," says GZ's chief executive Michal Sterba. How vinyl records are made

Top 50 Most Iconic Album Covers Share. Our list of the most memorable album covers in history. By Chad GrischowGreat album covers can burn into your mind just as easily as the music they contain, giving you a visual representation of the kind of sonic adventure the artist is about to take you on. After making our initial list of the twenty-five most iconic, there were loads of great suggestions from readers. Most were covers that we considered, but were varying degrees from making the list. After careful consideration of reader suggestions and our original selections, here is our alphabetical list of the fifty most iconic album covers of all time. 2 Live Crew: As Nasty As They Wanna Be As misogynistic and over the top as it is, there is no denying the impact of this polarizing cover from the first album to be deemed legally obscene. AC/DC: Highway To Hell The last album to feature Bon Scott also features their best cover. Herb Alpert & The Tijuana Brass: Whipped Cream And Other Delights Beastie Boys: License To Ill

Album cover In addition, in the case of all types of tangible records, it also serves as part of the protective sleeve. Early history[edit] Around 1910, 78 rpm records replaced phonograph cylinder as the medium for recorded sound. The 78 rpm records were issued in both 10" and 12" diameter sizes and were usually sold separately, in brown paper or cardboard sleeves that were sometimes plain and sometimes printed to show the producer or the retailer's name. German record company Odeon pioneered the "album" in 1909 when it released the Nutcracker Suite by Tchaikovsky on four double-sided discs in a specially designed package.[1] (It is not indicated what the specially designed package was.) Beginning in the 1920s, bound collections of empty sleeves with a plain paperboard or leather cover, similar to a photograph album, were sold as "record albums" that customers could use to store their records (the name "record album" was printed on some covers). Formats[edit] Design[edit] Packaging[edit]