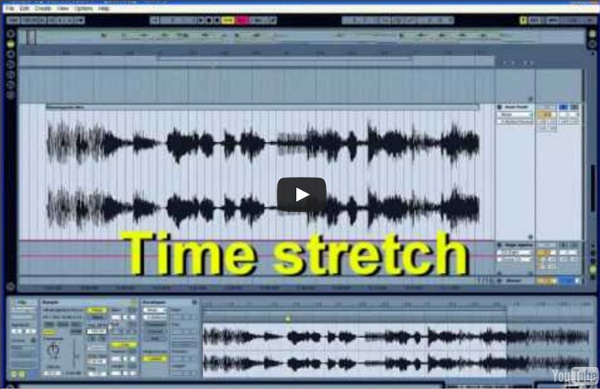 Tutorial: Skrillex-y Robotic Dubstep Bass Growl :: Boy in a Band Hi! I’m Dave from boyinaband.com and I’m going to show you how to make this Skrillex-y dubstep bass growl synth from my nextup competition entry. It’s quite a complicated synth, but if you follow through I’ll explain why it works so you can take this knowledge and develop your own, different synths with a similar kind of grittiness and power. Okay! Let’s begin. First, make a combinator to keep everything in. I’ll copy across the notes now so we can hear our epic bass. Since wavetable synths are the basis of this kind of tone I figure it warrants an in-depth explanation. So, before that extended metaphor gets me in trouble with the RSPCA, let’s explain what we can do with all those waveforms – we’ll soon make this synth change between waveforms as the sound progresses. You’ll also sound really silly. That’s where the position parameter comes in. Then we want an analog oscillator down an octave on the default saw wave for a bit more thickness. Now the roboticness. See how vital it is?

Motorola developing Android phones with stock software, 'just right' size The dream of a stock Android phone that isn't too big to use with one hand was almost realized by the HTC First, but we may see some other options on the market in the near future, as well. According to a report from PC Mag, Motorola is working on new smartphones that will run 'stock' Android and will be smaller than the giant Android devices that have been dominating the market for the past couple of years. PC Mag spoke with Jim Wicks, Motorola's chief of design, who said that these new phones are the result of collaboration and influence from Google, as opposed to the other devices that Motorola has released in the time since Google acquired the company. "It will be the unadulterated version of Android, and I feel really good about our embracing Android and being the best Android experience." Wicks also touched on included software with phones, more commonly called bloatware, and said that Motorola's phones will be as bloatware-free as possible.

Electronic Music Production Tips and Tricks Red and violet are on opposite ends of the spectrum, yet we perceive violet as being between blue and red. Why? : askscience Secrets Of The Mix Engineers | compendium of links Finding real-world advice from established creative mixing engineers and record producers is not at all easy, since most tend to be highly protective about their approaches and the tricks of their craft, but this popular series written by long-time SOS author and musician Paul Tingen gets them to open up and explain the technical and artistic detail of the mixing sessions of a well-known chart hit they worked on. Open Access unlocked Peter Cobbin & Kirsty Whalley Inside Track | Secrets Of The Mix Engineers: Underpinning the biggest spectacle of 2012 was probably the largest multitrack recording ever made. Steve Greenwell discusses Joss Stone Steve Greenwell knew he wanted a live feel for Joss Stone’s second album of soul covers, but finding the right mix was more of a challenge. Jeff Bhasker on mixing ‘We Are Young’ Inside Track | Secrets Of The Mix Engineers Jeff Bhasker doesn’t usually mix his own productions or work with indie-rock bands. Dave Ogilvie mixing ‘Call Me Maybe’ Recording Slash

TIL that composer Charles Ives proposed that a 20th Amendment should be added to the U.S. Constitution that allowed people to submit legislative proposals to Congress. Members of Congress would then cull the proposals, selecting 10 each year as referendum Split the Panning, Expand the Sound | Soundista If you’re having trouble making your mixes sound full and powerful, this article will go over one of the many methods for filling out your sound. It’s one of the simplest music production techniques, but one of the most effective. It can be applied to Electronic Dance music, Dubstep, Hip-Hop, or any other genre. It can also be done with almost any music software, from Audacity to Reason. THE TECHNIQUE Let’s say you have a synthesizer lead for an electronic music song that needs to sound heavier. First, copy and paste the track onto another separate track. Now that you have two identical tracks, it’s time to separate them. The moment of truth happens when you take one of these tracks, either the left or the right, and move it forward in the timeline by just a few milliseconds. THE USES You can utilize the method in limitless ways. This method was pioneered mostly by Heavy Metal producers years ago. Reverb effects are helpful for making the spatial effect even greater.

TIL That the Vikings were actually much cleaner than we assume them to be today; Saxon women even preferred them to their own (Saxon)men. : todayilearned How to Make Mixes Sound Big | Soundista Tech By Soundista | How to Make Mixes Sound Big The level of perceived loudness in your music can make it more exciting, more engaging and more driving. Loudness is not quite as simple as it may seem on the surface, however, and there are some points that generally need clarification. Peak Levels Do Not Equate to Loudness It’s possible to have a track with peak levels brushing up against 0 dB and to still not have it sound very loud. To determine the actual loudness of a track, you’ll need to take a look at the loudest peak level in the track and the average, expressed as the RMS (Root Mean Square) power of the track. The Role of Compression Compression can be used to reduce the peak levels of the loudest sounds on a track and to bring up the average level. Other Options Limiters can be used for a more intense effect, but these require that you have short attack times. Alternately, you can keep the peak levels on your track as they are and bring up the average level of the track. Good Mixing

Physicists May Have Evidence Universe Is A Computer Simulation Physicists say they may have evidence that the universe is a computer simulation. How? They made a computer simulation of the universe. A long-proposed thought experiment, put forward by both philosophers and popular culture, points out that any civilisation of sufficient size and intelligence would eventually create a simulation universe if such a thing were possible. And since there would therefore be many more simulations (within simulations, within simulations) than real universes, it is therefore more likely than not that our world is artificial. Now a team of researchers at the University of Bonn in Germany led by Silas Beane say they have evidence this may be true. In a paper named ‘Constraints on the Universe as a Numerical Simulation’, they point out that current simulations of the universe - which do exist, but which are extremely weak and small - naturally put limits on physical laws. But the basic impression is an intriguing one.

16 Bit vs. 24 Bit Audio This article is going to be kept as simple as possible. It's just designed to get the new person up to speed on the issues and provide a strong sense of perspective on what really matters. We are going to talk about bit depth and sample rates, how these translate into storage requirements, and then talk about the subjective differences between the two methods of recording your music. In short, what is the relation of 24 bit recordings to the "sound quality" we all want. When I first ventured into digital audio, it was a much simpler world. Products that recorded and generated digital audio were all 16 bit. Tip: Never refer to 16-bit or 24 bit audio as the "bit rate". Gradually, products began to appear with a higher bit depth--an 18 bit drum machine, 20, then 24 bit effects processors. So what do all these number mean and how important are they? First of all, know that we are talking about data. Bit Depth refers to the number of bits you have to capture audio.

TIL: Scientists May Have Evidence We Are In A Matrix-Like Simulation. : todayilearned