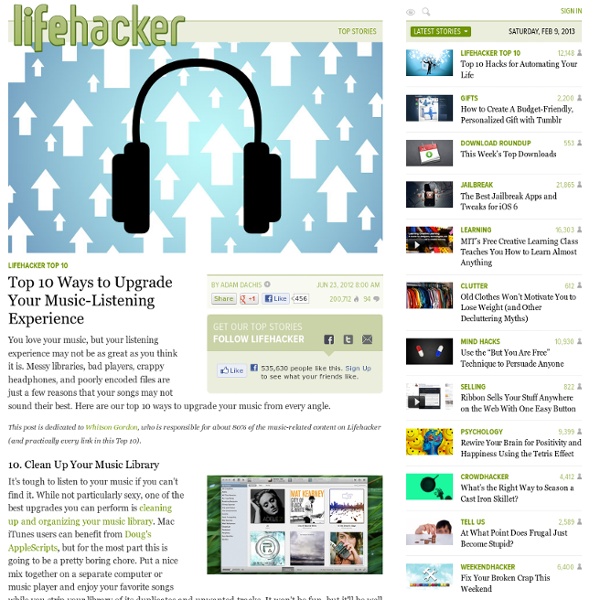 A few things from the article to address: For PC users, Mediamonkey is almost without rival for organizing your files. It tags album art and other metadata straight from Amazon. Secondly, the suggestion of a USB DAC is spot-on. Fine - three things: Get some actual speakers. Also, there is no shame in using lossless or lossy.

Твиттер / @AlphaKnowledge/collaborate-share-know... Don’t Wait for Layoffs or a Job Search to Update Your Resume Not sure weekly is necessary, unless you're in a really volatile environment. But I agree with the premise of the article, and review mine at least annually. (I've been with the same employer for 8.5 years.) Usually around annual review time. Length of employment means little when "restructuring" is forecast, I was given notice after 9 years (no severance) — my department was never considered critical. Updating a resume weekly isn't as productive as keeping track of week to week successes that can be used to propagate several target resumes: a record that can also be used during annual review time. Being "let-go" creates an awful feeling of being useless.

Russia: Envisioning the “Cloud Democracy” Utopia Cloud Democracy [ru] is the title of the new book written by Leonid Volkov [ru] and Fyodor Krasheninnikov [ru], two political bloggers from the Urals region of Russia. Cloud Democracy addresses a wide audience of readers “who, despite everything, believe in progress and democracy” and displays the authors’ vision on how a system of ‘future’ democratic governance can be built with the help of online tools. The preface of the book says [ru]: We believe, that we witness the new era in the history of mankind – the era of limitless direct communications, which would enable the existence of fair, transparent, and just political system. Leonid Volkov at Yekaterinburg city council, photo by ekburg.ru, courtesy of Leonid Volkov The first chapter discusses current issues of democracy (and Russian democracy, in particular), the second chapter dwells on technology and available technological solutions for ‘cloud democracy.’ Live estimation of trust towards a politician. LV: None. LV: Yes.

How to Get Rid of People Who've Overstayed Their Welcome These all assume that the person who is overstaying is able to pick up on the cues. I had a former co-worker who was somewhere on the Aspergers/Autism spectrum and couldn't pick up on subtle cues. He would be standing in my office talking to me as I collected materials, shut down my computer, picked up things, stood up, and walked to my door and stood in the hallway — and he would still keep talking to me. ("At" me might be more accurate.) I finally learned that I just had to be polite but direct: "I'm sorry, but right now I have to go to a meeting," or "I'm in the middle of something right now — can we talk a bit later?" In his case, the "polite but direct" option was the only option that worked, because he wasn't capable of picking up on the other little cues (body language, looking at your watch, etc.).

Группа рецепты. Мы ♥ питания. 7 Ways to Burn Out Before 30 10inShare52 Think professionals don’t hit job burnout until mid-to-late career? And that the typical professional with burnout already has a couple of kids and a massive mortgage before “the grind” finally gets them? Actually, burned-out careerists come in all ages and management levels. With the demands of the global economy, conference calls with co-workers around the globe, and the endless stream of emails, it’s even more likely you’ll hit job burnout early on in your career. The good news is that by understanding a few simple warning signs of job burnout, you can either avoid burnout entirely or reignite your career so you’ll achieve a higher level of satisfaction and performance. And by understanding the paths to burnout, you’ll reap benefits like: Ease – You’ll know which opportunities to follow and which to avoid when headhunters or other professional contacts get in touch Freedom – You’ll have freedom to live your career on your own terms versus someone else’s 1. 2. 3. 4. 5. 6. 7.

Free-ebooks.net | Download free Fiction, Health, Romance and many more ebooks The Stupid Things You Do With Your Smartphone (and How to Fix Them) As a new smartphone owner (I refuse to call my old Garmin a smart phone, it kinda maybe let me surf the web, no downloadable apps, and I couldn't even get java jars to work worth a damn on it...), I find that this is becoming my #1 pet peeve. I don't really give a damn about new email, 95% of the time, I'm reading it from my computer, not my phone. And only when I want to read it, not as soon as somebody sends me something. Same with FB and Twitter. Evidently I'm too old school, I'm used to being able to read texts by just looking at my phone, and not this scroll the message in notifications and turn off the screen in one or two seconds that seems to happen. Texts I DO want to know what's going on, because generally I DO want to respond to those immediately. I understand that some people don't give a crap about texts, it's email they're worried about, or FB or Twitter, or LinkedIn or something else. As far as #6, that's been going on in my family before smart phones.