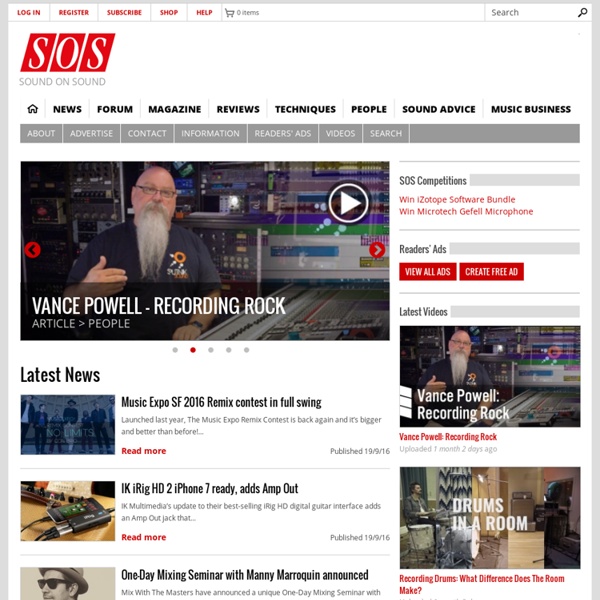 Sweeping the Frequencies for Precise EQing - Tuts+ Music & Audio Tutorial If I there's one plug-in that's the audio equivalent to a Swiss Army knife, it would have to be the EQ plug-in. From subtle corrections to drastic sound design changes, you can use an EQ plug-in for an almost infinite list of tasks. In this tutorial, I will show you one such technique, called Sweeping the Frequencies, that can give you surgical-like precision when EQing and notch filtering a sound source to better fit in your mix. When using an EQ—which is short for Equalizer—you are essentially given control over a sound source’s volume. But instead of having an overall global affect, like when using the master gain on a channel strip, you can turn the volume up or down on specific frequency bands independent of the other frequencies.

JOS Home Page Julius Orion Smith III Home Page Online Books Publications the squarewave parade repairing your TASCAM 122mkii speed issue which by the way has 3 heads and vari-speed, and as a result can be used as a tape delay... which is why i bought it in the first place. click image to view larger - Featured Reviews When I first saw a picture of the Copperphone, I had no idea what to think other than I had to try it. In true home-brew-tinkerer fashion, Mark Pirro makes the Copperphone by hand, one at a time, in his garage. And the result is stunning. What is it? The Copperphone is a dynamic microphone manufactured with vintage communication components and telephone parts.

Sound Like A Virtuoso Musician With Your iPad [Feature Garageband for iPad is an amazing deal – for just five bucks, you have access to a fully featured, powerful set of recording tools at your beck and call, all while on the go. There’s no need for wires, expensive sound equipment, or even instruments – GarageBand for iPad can make you sound like an expert musician, regardless of your previous experience with music or recording software. Let’s take a look at how.

Blog - The Recording RevolutionThe Recording Revolution All I ever wanted to do with this site was help a few of my friends make better recordings and mixes. Over the past 7 years, I’ve been honored to help millions more. It was 7 years ago this week that I published my first ever post on The Recording Revolution. Almost 1,000 posts and… Read more » How can you know for sure that your EQ moves are helping a track? What if you’re simply making the track louder and that’s why you like it?