Holden, JD, and the Red Cap- The Catcher in the Rye Part 2: Crash Course English Literature #7 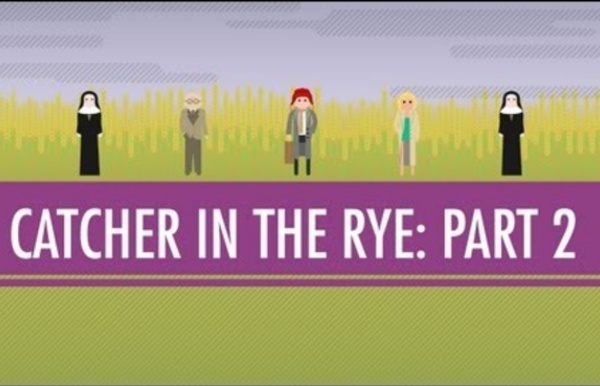 The Catcher in the Rye at 60: Ten things you should know 1. It screwed up, majorly The novel is said to have popularised the term "screw up", as in "Boy, it really screws up my sex life something awful. My sex life stinks." Hurrah for disaffected teenagers across the globe. 2. Salinger spent a lot of time refusing requests to adapt the novel. 3. Salinger was working on a version of the book when he was fighting in the second world war. 4. Mark David Chapman, the killer of John Lennon, so identified with the Salinger's antihero that he wanted to change his name to Holden Caulfield. 5. Salinger could have been a meat importer – his father was a successful meat and cheese merchant who sent his son to Austria to brush up on the trade before the second world war. 6. The American rock band Green Day are proud champions of Salinger's antihero; their 1994 song Basket Case is a nasally homage in nasally whines. 7. Salinger was dating Oona O'Neill, daughter of the playwright Eugene O'Neill, until she started seeing the comedian. 8. 9. 10.

AZ Lyrics.az | J.D. Salinger - I'm Crazy lyrics IT WAS about eight o'clock at night, and dark, and raining, and freezing, and the wind was noisy the way it is in spooky movies on the night the old slob with the will gets murdered. I stood by the cannon on the top of Thomsen Hill, freezing to d**h, watching the big south windows of the gym—shining big and bright and dumb, like the windows of a gymnasium, and nothing else (but maybe you never went to a boarding school). I just had on my reversible and no gloves. Somebody had swiped my camel's hair the week before, and my gloves were in the pocket. 15 Bogeymen From Around The World Creepy The bogeyman is a legendary ghost-like monster. The bogeyman has no specific appearance and conceptions of the monster can vary drastically even from household to household within the same community; in many cases he simply has no set appearance in the mind of a child, but is just an amorphous embodiment of terror. This list looks at 15 bogeymen from around the world. The Namahage visits each house on New Year’s to ask if any misbehaving children live there. If the parents are able to report that their children are not lazy and do not cry, he moves on to the next house. The Korean bogeyman is called Kotgahm, which is the word for persimmon. Duérmete, niño, duérmete ya. If you think of a coconut as a head, with the three holes the features of a face, you can see how El Coco might be transformed in the mind of a child to a hairy little man. There are many theories about the origin of the word “bogeyman.” Czech Republic and Poland The Bolman has claws and fangs. Jamie Frater

Text to Text | 'The Catcher in the Rye' and 'The Case for Delayed Adulthood' Photo When we choose a famous passage from a classic work like “The Catcher in the Rye” for an edition of our Text to Text series, there are literally thousands of New York Times articles with which we could profitably pair it. For instance, we might have chosen any of the appraisals and histories we link to on the J.D. Salinger page we made when the author died in 2010. But when we read a recent article in the Sunday Review that made the case that the current trend of “delaying adulthood” might actually be good for some young people, we thought it might offer whole new way to think about the line between adolescence and adulthood — and about whether, and how, “Catcher” still has something to say to teenagers today. Below, some ideas for putting the two together, but, as always, we would love to hear how you teach the novel. Background The author John Green on “Catcher” from his “Crash Course” series In his obituary of J.D. Does this novel still speak to the teenagers you teach? 1. 2. 3. 4.

Dystopia The 100 best novels: No 72 – The Catcher in the Rye by JD Salinger (1951) JD Salinger’s Holden Caulfield is to the 20th century what Huckleberry Finn is to the 19th: the unforgettably haunting voice of the adolescent at odds with a troubling world. Holden, the opposite of Huck, is an unhappy rich boy who has done a bunk from his posh secondary school, Pencey Prep, in Agerstown, Pennsylvania. He begins his first-person narrative in words that echo the famous opening of Twain’s novel (No 23 in this series), a frank disavowal of “all that David Copperfield kind of crap”. Holden declares that he isn’t going to tell us “about this madman stuff that happened to me around last Christmas just before I got pretty run-down”. One of the many remarkable things about Salinger’s portrayal of Holden Caulfield is that he seems to be fully inside the head of this troubled 16-year-old when the author himself was almost twice that age. That’s just one reading. A note on the text (and its afterlife) The Catcher in the Rye had some difficulty finding a publisher.

Ancient d20 die emerges from the ashes of time | Crave Let's go back in time. Way back. Keep going. OK, stop. You're in the Ptolemaic Period. The Metropolitan Museum of Art owns what may be the world's oldest d20 die. The die is a little over an inch tall. The symbols for eta, theta, and epsilon can be clearly seen. (Via io9) List of books banned by governments Wikipedia list article A display of formerly banned books at a US library In many territories, distribution, promotion, or certain translations of the Bible have historically been prohibited or impeded. See Censorship of the Bible.[1] Many countries throughout the world have their own methods of restricting access to books, although the prohibitions vary strikingly from one country to another: hate speech, for example, is prohibited in a number of countries, such as Sweden, though the same books may be legal in the United States or United Kingdom, where the only prohibition is on child pornography. Despite the opposition from the American Library Association (ALA), books continue to be banned by school and public libraries across the United States. Afghanistan[edit] Albania[edit] Argentina[edit] Australia[edit] Austria[edit] Bangladesh[edit] Belgium[edit] Bosnia and Herzegovina[edit] Brazil[edit] Canada[edit] Chile[edit] China[edit] Denmark[edit] Egypt[edit] El Salvador[edit] Eritrea[edit] France[edit]

Banned Books That Shaped America The Library of Congress created an exhibit, "Books that Shaped America," that explores books that "have had a profound effect on American life." Below is a list of books from that exhibit that have been banned/challenged. (To learn more about challenges to books since the inception of Banned Books Week, check out the timeline created by ALA.) The Adventures of Huckleberry Finn, Mark Twain, 1884 The first ban of Mark Twain’s American classic in Concord, MA in 1885 called it “trash and suitable only for the slums.” The Autobiography of Malcolm X, Malcolm X and Alex Haley, 1965 (Grove Press) Objectors have called this seminal work a “how-to-manual” for crime and decried because of “anti-white statements” present in the book. Beloved, Toni Morrison, 1987 Again and again, this Pulitzer-prize winning novel by perhaps the most influential African-American writer of all time is assigned to high school English students. Bury My Heart at Wounded Knee, Dee Brown, 1970 Catch-22, Joseph Heller, 1961

The H.P. Lovecraft Archive Kurt Vonnegut at the Blackboard Voices in Time I want to share with you something I’ve learned. I’ll draw it on the blackboard behind me so you can follow more easily [draws a vertical line on the blackboard]. This is the G-I axis: good fortune-ill fortune. Death and terrible poverty, sickness down here—great prosperity, wonderful health up there. Your average state of affairs here in the middle [points to bottom, top, and middle of line respectively]. This is the B-E axis. Now let me give you a marketing tip. Another is called “Boy Meets Girl,” but this needn’t be about a boy meeting a girl [begins drawing line B]. Now, I don’t mean to intimidate you, but after being a chemist as an undergraduate at Cornell, after the war I went to the University of Chicago and studied anthropology, and eventually I took a masters degree in that field. One of the most popular stories ever told starts down here [begins line C below B-E axis]. There’s to be a party at the palace. It’s a pessimistic story. His father has just died.

'The Catcher in the Rye' | Top 10 Censored Books Within two weeks of its 1951 release, J.D. Salinger’s novel rocketed to No. 1 on the New York Times best-seller list. Ever since, the book — which explores three days in the life of a troubled 16-year-old boy — has been a “favorite of censors since its publication,” according to the American Library Association. In 1960, school administrators at a high school in Tulsa, Okla., fired an English teacher for assigning the book to an 11th-grade class. While the teacher later won his appeal, the book remained off the required reading list. Another community in Columbus, Ohio, deemed the book “antiwhite” and formed a delegation to have it banned from local schools. The book introduced slang expressions like the term screw up (as in, “Boy, it really screws up my sex life something awful”). MORE: The Catcher in the Rye Part 2: More Teenage Angst, Courtesy of Swedish Author Next Harry Potter Series

Multiple Choice Zombie Apocalypse Survival Game | Choice of Zombies You really aren't awake yet. You never are until at least your second cup of coffee, and this is only your first. You're having a hard time getting your eyes to focus. A human leg. The man gnawing on the human leg suddenly stops chewing, as though some sound disturbs him. You've heard about the outbreak in Millbury, of course. But it seems the newscasters were at least a little right, because there's a zombie chowing down on a human leg in your front yard. Shit.