K to sleep by rickjamesbiotch 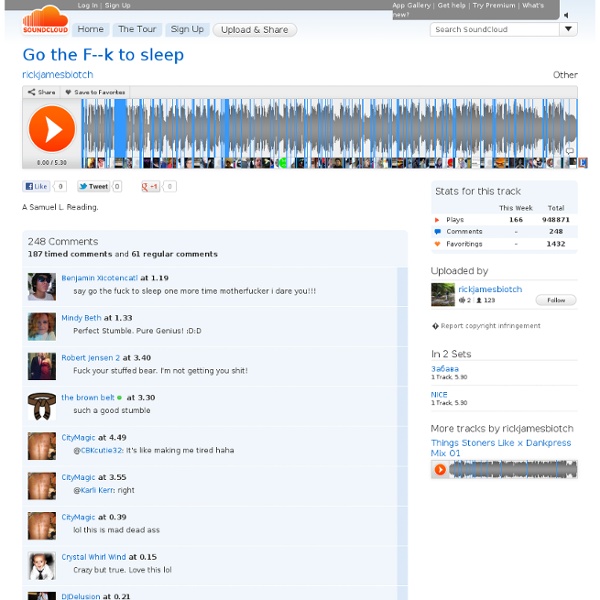 How the Necronomicon Works" Weird fiction author H.P. Lovecraft created a mythology that includes bizarre monsters, troubled communities, insane scholars and a library of books filled with forbidden lore. Of all the books detailing this mythology that Lovecraft mentions in his fiction, one in particular captures the imagination more than any other: the "Necronomicon." According to Lovecraft, it's a tome filled with secrets and rituals that can drive a reader to the brink of insanity. In reality, the "Necronomicon" doesn't exist, though more than a half dozen books with the title "Necronomicon" are available at bookstores. printer A great tip is an awesome thing. Whether it's an undiscovered restaurant, a sleeper stock, or a Sure Thing in the late double at Pimlico, savvy inside info imbues a man with confidence. Control. Strength. Knowledge is power, baby.

Best Quotes of All Time It’s been three years since we shared our original list of some of the best quotes of all time, and we felt it was a good time for an update. We’ve added another 25 quotes for you. But these aren’t just any quotes. These are quotes designed to inspire. Top 10 Websites For You To Play Music According To Your Mood Usually, there will be some happy music when the film scenario is happy, and there will be some sad music when the film scenario is sad. When I am happy, I will like to play some happy music, and when I am sad, I will also like to play some happy music, in order to cheer up. So, how to find the right music for your mood? You can try below 10 websites, which will let you play music according to your mood, and what is more, you can listen to all the music free and don’t need to sign up.

Learn Criss Angel Style Magic Tricks "Awesome, you're a great illusionist!" Criss Angel is a great entertainer, performing many stunning illusions. Here are some great Criss Angel style coin tricks that look like real magic! The Ultimate St. Patrick's Day Dessert St. Patrick's Day at Epicurious "O ne of Ireland's gifts to the world" is chef Shane Coffey's take on Dublin-born Guinness Stout. One of Coffey's gifts to the world would be his recipe for Coffey, who is now executive chef at the Meridian Club in the Turks & Caicos, cooked up this recipe when he was at Alias on New York City's Lower East Side. He wanted to make Irish-inspired dishes for the restaurant's St. Patrick's Day celebration, but, stumped in his quest to create an easy dessert for the prix-fixe menu, he took refuge at his favorite New York pub, Molly's. Like many before him, he found inspiration at the bottom of a glass: "As I savored my pint, I looked up and saw a Guinness poster that said, 'My Goodness, My Guinness!'

Mytho Logique How did Mythology started ? 5 amazingly talented students from ESMA (Artistic school in Montperllier, France) decided to explain it for their latest project in college. Created between september 2009 and september 2010, Mytho Logique is an awesome short animation film directed by J. Ambron, A. Aramini, A. Belbari, G. Multiple Choice Zombie Apocalypse Survival Game You really aren't awake yet. You never are until at least your second cup of coffee, and this is only your first. You're having a hard time getting your eyes to focus. But it certainly looks like there's a man in your front yard, crouched down on all fours, gnawing at a leg.

Chocolate Guinness Goodness Recipe at Epicurious Editor's note: This recipe was developed by Shane Philip Coffey, the chef at Alias restaurant on New York City's Lower East Side. This rich and luscious dessert came about because I needed a special dessert for a St. Patrick's Day tasting menu.

Meet The Baby Godfather Oh Sheltering Suburban Mom, you are the staple of the suburban neighborhood. You’ve spent your life in the same podunk suburban county, absorbing every fear-mongering story hyped in the news and dispensing condescending advice while becoming an obvious hypocrite to everyone but yourself. And so we present to you the grand finale of the Sheltering Suburban Mom meme: Enjoy this hilarious meme? Check out part 1: The Trials & Travails Of Sheltering Suburban Mom and part 2: The Subjugating Queen: Sheltering Suburban Mom. 15 Bogeymen From Around The World Creepy The bogeyman is a legendary ghost-like monster. The bogeyman has no specific appearance and conceptions of the monster can vary drastically even from household to household within the same community; in many cases he simply has no set appearance in the mind of a child, but is just an amorphous embodiment of terror.