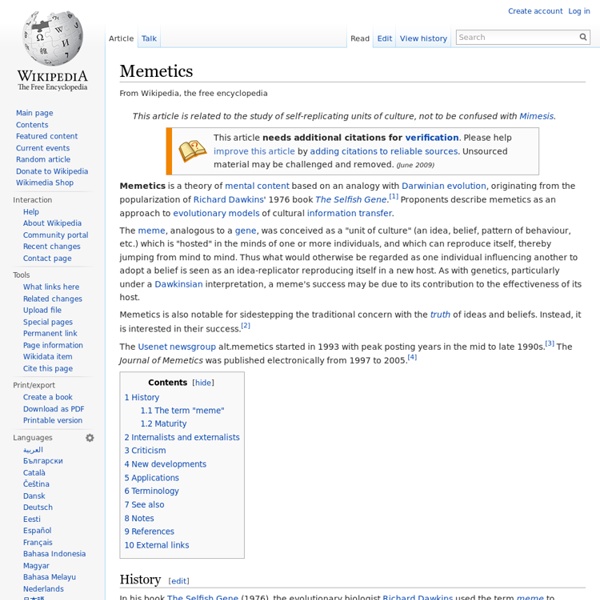 This article is related to the study of self-replicating units of culture, not to be confused with Mimesis. Memetics is a theory of mental content based on an analogy with Darwinian evolution, originating from the popularization of Richard Dawkins' 1976 book The Selfish Gene.[1] Proponents describe memetics as an approach to evolutionary models of cultural information transfer. The meme, analogous to a gene, was conceived as a "unit of culture" (an idea, belief, pattern of behaviour, etc.) which is "hosted" in the minds of one or more individuals, and which can reproduce itself, thereby jumping from mind to mind. Thus what would otherwise be regarded as one individual influencing another to adopt a belief is seen as an idea-replicator reproducing itself in a new host. As with genetics, particularly under a Dawkinsian interpretation, a meme's success may be due to its contribution to the effectiveness of its host. History[edit] The modern memetics movement dates from the mid-1980s.

A1 Poster Printing Other Sizes Available: A0 | A2 | A3 At PosterPigeon we offer all standard "A" sizes of poster (and others). Measuring 841mm x 594mm, A1 posters can make a real impact and provide plenty of space to get your message across. We work hard to offer the best poster printing prices in the UK! Like for like you wont find a better offer available in the UK. Intellectual dark web Term referring to a group of public personalities who oppose progressive identity politics in the media and academia Definition[edit] Origin and usage[edit] Graphology Graphology (or graphoanalysis, but not graphanalysis) is the analysis of the physical characteristics and patterns of handwriting claiming to be able to identify the writer, indicating psychological state at the time of writing, or evaluating personality characteristics.[1] It is generally considered a pseudoscience.[2][3][4][5][6] The term is sometimes incorrectly used to refer to forensic document examination, due to the fact that aspects of the latter dealing with the examination of handwritten documents are occasionally referred to as graphanalysis. Graphology has been controversial for more than a century. Although supporters point to the anecdotal evidence of positive testimonials as a reason to use it for personality evaluation, empirical studies fail to show the validity claimed by its supporters.[7][8] Etymology[edit]

Stanley Keleman Stanley Keleman (November 1931 – August 11, 2018)[1] was an American writer and therapist, who created the body psychotherapy approach known as "formative psychology". He was one of the leaders of the body psychotherapy movement nationally and internationally. His methodology rested on an anatomical base and incorporates an evolutionary, philosophical and mythological perspective; within this formative paradigm the human is capable of learning voluntary self-influence of instinctual and emotional expression as a way to manage dilemmas of daily living and to form personal choices for creating a future. Keleman started developin and articulating his concepts in 1957. In 1971, he published the first of 10 books.[2] Early life[edit]

Introduction to the Magic of The Ogham Trees Original artwork © Ruby Clark 2010 The Ogham Tree Controversy: It is not possible to be definitive on the subject of the Ogham. Eugene Gendlin Eugene T. Gendlin (born Eugen Gendelin; 25 December 1926 – 1 May 2017) was an American philosopher who developed ways of thinking about and working with living process, the bodily felt sense and the "philosophy of the implicit".[1] Though he had no degree in the field of psychology, his advanced study with Carl Rogers, his longtime practice of psychotherapy and his extensive writings in the field of psychology have made him perhaps better known in that field than in philosophy. He studied under Carl Rogers, the founder of client-centered therapy, at the University of Chicago and received his PhD in philosophy in 1958.

EVENTS – Nymphs & Thugs Spoken word poetry is at the heart of what we do, and as well as producing UK tours, we host regular #LIVEwire nights between Leeds and London as well as at music festivals and venues around the country. Our first UK tour took place in May 2017 to support the release of Salena Godden‘s ‘LIVEwire’ album. We were also co-producers on Matt Abbott‘s 22-date UK theatre tour of ‘Two Little Ducks’ in autumn 2018. As well as our ‘LIVEwire’ events, we also programme and co-produce the bi-monthly ‘Chelping’ at The Leeds Library event. LIVEwire regional dates and Leeds residency 2019-20 Our most significant series of ‘LIVEwire’ events to date, and a major step up for Nymphs & Thugs as a spoken word event producer.

Satipatthana Sutta 10th sutta in the Majjhima Nikaya Sources[edit] Dating[edit] While elements of the Satipathana sutta can be found in the Samyutta Nikaya and the Samyukta Nigama, which belong to the oldest strata of the Buddhist suttas, the elaborate Maha Satipatthana Sutta exists only in the Theravada Digha Nikaya.