Build Your Own Adobe Creative Suite 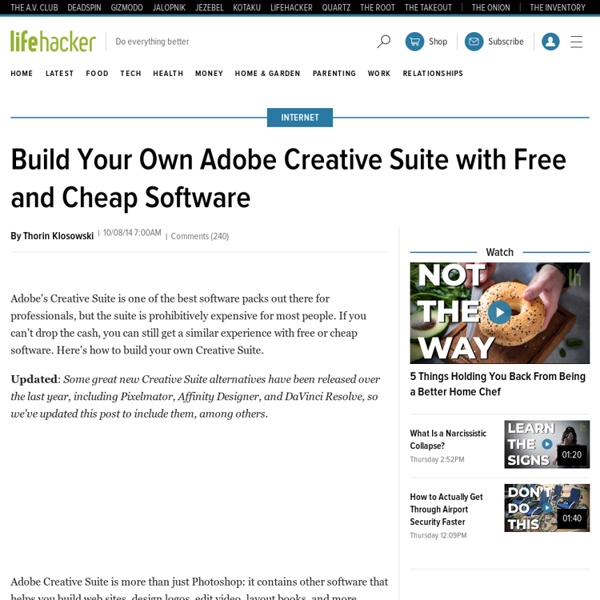 the suggested replacement for After Effects is not even close to the same capabilities without quadrupling your work. Blender is NOT the same as AE. Blender is rocking good as a Maya or other 3d modeling replacement but What I can whip out in 2 minutes on AE will take you a week to recreate on Blender. Blender does not have very good composting tools because it's just not designed to do that. Flagged Yeah, sadly, that stretch was the closest I could come to a free After Effects replacement. I think you may be underestimating how powerful it actually is. Also: at around $1000 as a standalone program, calling it one of the "cheaper retail options" may confuse some folks when the rest of the Adobe Suite is like $400 as standalones, and people don't want to pay for those. Edited to add: Adobe didn't invent Flash, they bought it from Macromedia, who had purchased it from its original developers after Adobe turned them down in the mid-90's. And thanks for revisiting your words.

64 Things Every Geek Should Know If you consider yourself a geek, or aspire to the honor of geekhood, here’s an essential checklist of must-have geek skills. The term ‘geek’, once used to label a circus freak, has morphed in meaning over the years. What was once an unusual profession transferred into a word indicating social awkwardness. As time has gone on, the word has yet again morphed to indicate a new type of individual: someone who is obsessive over one (or more) particular subjects, whether it be science, photography, electronics, computers, media, or any other field. A geek is one who isn’t satisfied knowing only the surface facts, but instead has a visceral desire to learn everything possible about a particular subject.

6 Bad Postures That Are Ruining Your Health & How To Correct Them Jeff Roberts, Collective Evolution | Straighten up that back soldier! No seriously, if you are like the majority of the population, chances are you are suffering from symptoms correlated with bad posture. Catching a glimpse of myself in the mirror, it’s easy to see that I have forward neck/head posture. 50 Open Source Tools to Make Your Life Easier The open source community is vibrant, continually growing, and just loves to create applications and tools to make lives easier. Here are 50 of our favorite open source apps that help us do everything from managing pictures on our computer to learning about Jupiter and Mars. Chandler – An information management application for personal use or small group collaboration.

10 Free Open Source Alternatives to Adobe Creative Suite Posted 06/21/2011 at 1:50pm | by Florence Ion When there's just not enough cash in the bank and you're in a bind, the last thing you're able to do is drop a ton of money for pricey software like Adobe Creative Suite. And sometimes, the professional-grade stuff is too much overkill for simple tasks like putting together a poster, blurring out a license plate in a photo or cropping out a shaky part of your vacation video. So that's what open source software is for. While they're sometimes not the most stable of applications, they're free and they oftentimes get the job done, just like their paid-for counterparts. We compiled a list of some of the best open source Adobe Creative Suite alternatives.

YouTube Video Not Available in Your Country? Watch Blocked Videos You could be staying in countries US, UK or India but still may not be able to watch all YouTube videos. This is because YouTube gives content owners an option to restrict videos to certain geographic regions. Learn how to watch blocked YouTube videos that are not available in your country. No, this is not about Internet censorship in countries like China or Pakistan where ISPs frequently block access to sites like YouTube following Government orders. You could be staying in a country like US, UK or India but may not be able to watch every video on YouTube – that’s because the content owners have allowed access to that video only from certain countries or geographic regions.

A New Theory to Explain the Higgs Mass Three physicists who have been collaborating in the San Francisco Bay Area over the past year have devised a new solution to a mystery that has beleaguered their field for more than 30 years. This profound puzzle, which has driven experiments at increasingly powerful particle colliders and given rise to the controversial multiverse hypothesis, amounts to something a bright fourth-grader might ask: How can a magnet lift a paperclip against the gravitational pull of the entire planet? Despite its sway over the motion of stars and galaxies, the force of gravity is hundreds of millions of trillions of trillions of times weaker than magnetism and the other microscopic forces of nature.

42 of the Best Free Linux Scientific Software Science is the effort of trying to understand how the physical world works. From observation and experimentation, science uses physical evidence of natural phenomena to compile data and analyze the collated information. Science really prospers and advances when individuals share the results of their experiments with others in the scientific community. 5 Desktop Publishing Tools for Small Business It's ridiculously easy to find a range of good quality, free, or inexpensive software for just about every business task you can imagine—with one possible exception—desktop publishing. If you want to publish a small business newsletter or magazine, your options initially appear limited, pricey, and complicated. Digging a bit deeper, however, you'll find options better suited for small business publishing. We've collected five newsletter publishing tools that range in price, operating system compatibility, and feature sets. Better yet, one of them is certainly bound to fit your budget.

How to Watch Blocked Internet Videos « Broken Secrets September 27, 2010 at 5:00 am Chad Upton By Chad Upton | Editor The internet is a great place to catch TV shows and clips that you or your PVR missed. Unfortunately, a lot of websites only allow their video content to be viewed in their service area. It’s not because they’re mean, they may have contracts that prevent them from distributing outside their area, not to mention cost savings reasons.

This isn’t a Bucket List; it’s a F**k-it List Life can end in an unpredictable instant. The degree of separation between people is estimated to be around 4.74. This is why we’ve all heard about the friend of a friend who was murdered, the local car accident with multiple fatalities or the fire which ended the lives of several we knew in our community. Most of us too have had something unexpectedly terrible happen to a loved one which resulted in their death. For example, there are terminal illnesses which spontaneously occur at many different ages and not just once a person has lived a full life, as well as accidents, rare diseases etc.

JavaScript JavaScript (JS) is a lightweight, interpreted, programming language with first-class functions. While it is most well-known as the scripting language for Web pages, many non-browser environments also use it, such as node.js and Apache CouchDB. JS is a prototype-based, multi-paradigm, dynamic scripting language, supporting object-oriented, imperative, and declarative (e.g. functional programming) styles. Read more about JavaScript. This section of the site is dedicated to the JavaScript language itself, and not the parts that are specific to Web pages or other host environments. For information about APIs specific to Web pages, please see Web APIs and DOM.

Help:Manual Quickstart Table of Contents Before we start explaining Scribus in depth, it might be useful to get a “feeling” for the way Scribus works. For that purpose, you can see how a simple front page of a magazine for an imaginary Rembrandt exhibition is being created. Top 10 Good Tech Habits Everyone Should Have Number 9 is a good one to keep in mind. There is a very popular store which I almost referred to as a retail outlet. I had to correct myself because I have known them to charge more than the Manufactured Suggested Retail Price, which should be the most that anyone should reasonably pay for any non-difficult-to-find item.