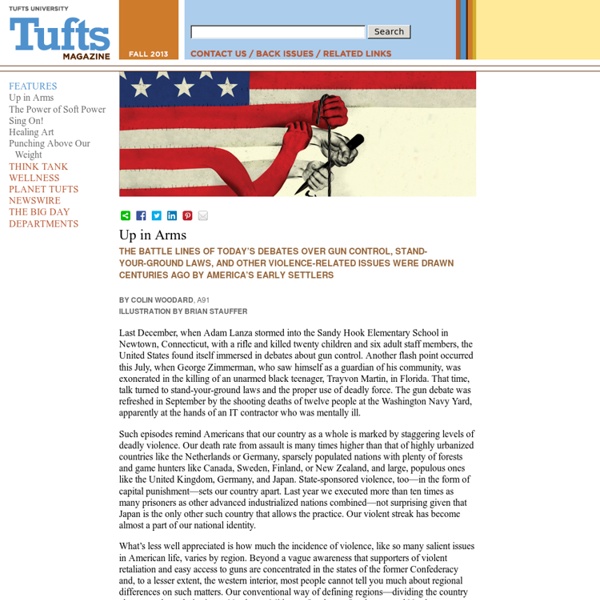 Last December, when Adam Lanza stormed into the Sandy Hook Elementary School in Newtown, Connecticut, with a rifle and killed twenty children and six adult staff members, the United States found itself immersed in debates about gun control. Another flash point occurred this July, when George Zimmerman, who saw himself as a guardian of his community, was exonerated in the killing of an unarmed black teenager, Trayvon Martin, in Florida. That time, talk turned to stand-your-ground laws and the proper use of deadly force. Such episodes remind Americans that our country as a whole is marked by staggering levels of deadly violence. What’s less well appreciated is how much the incidence of violence, like so many salient issues in American life, varies by region. The original North American colonies were settled by people from distinct regions of the British Isles—and from France, the Netherlands, and Spain—each with its own religious, political, and ethnographic traits. YANKEEDOM. EL NORTE. Related:  History • Politics

guns and the second amendment follow us omnivore Guns and the Second Amendment May 20 2013 1:00PM Edward J. Advertisement top of page Dr. Chancellor Williams Since Chancellor was blind, Oggi became his eyes and Chancellor became a mentor who shared his wisdom and historical perspective. He documented this remarkable experience with photographs and audiotapes that provide an intimate glimpse of Dr. Williams life during this period. Reeducation of Blacks will be required for the two mandatory changes in attitude: one toward each other in terms of mutual respect, and the other, a change in attitude about efficiency, expertise in business management and financial responsibility and management. Dr. He conducted field studies covering 26 nations in West, Central, East and Southern Africa, researching some 105 different societies and language groups. Professor Williams published over 50 articles, professional books, and lectures. Oggi Ogburn reading to the then blind Chancellor WilliamsThis picture was taken in 1975 by Oggi. Photos and article supplied by Oggi Ogburn Education 2000 Raceandhistory.com

Pop or Soda? Why Region Is More Important Than You Think Where you live in the United States determines a hell of a lot more than whether 'coke' means Coca-Cola or 'every single carbonated beverage.' It can also mean the difference between sauce on your pizza or nothing, the difference between honor killings or, uh, not honor killings, the difference between a time machine and an ... ATM? Yep. But, it goes deeper than how you pronounce "ruin" and "grocery" or whether you call toilet-papering a house "TPing" or "rolling" a house. It may be that we aren't all even living in the same nation. On today's podcast Cracked editors Jack O'Brien, Kristi Harrison and Jason Pargin discuss America's crazy regional differences, and talk with Colin Woodard (author of 'American Nations') about his claim that the fifty American states are actually eleven distinct nations.

Americans - Like Nazi Germans - Don't Notice That All Of Our Rights Are Slipping Away Americans Are Acting Like Slowly Boiling Frogs In the classic history of Nazi Germany, They Thought They Were Free, Milton Mayer writes: “What happened here was the gradual habituation of the people, little by little, to being governed by surprise; to receiving decisions deliberated in secret; to believing that the situation was so complicated that the government had to act on information which the people could not understand, or so dangerous that, even if the people could not understand it, it could not be released because of national security. And their sense of identification with Hitler, their trust in him, made it easier to widen this gap and reassured those who would otherwise have worried about it. “This separation of government from people, this widening of the gap, took place so gradually and so insensibly, each step disguised (perhaps not even intentionally) as a temporary emergency measure or associated with true patriotic allegiance or with real social purposes.

How to Think About Guns: A New Freakonomics Radio Podcast [MUSIC: The Wintermarket; “Thank You There Will Be No Encore” (from The Ballad of Artie Fufkin)] Stephen J. DUBNER: Steve Levitt is my Freakonomics friend and co-author. He’s an economist, at the University of Chicago. One topic he’s studied for lot of years, from a lot of angles, is crime. Levitt and I were working together, in Texas, on the day back in December that a 20-year-old guy in Connecticut named Adam Lanza killed his mother, then shot up an elementary school, killing 20 little kids and six adults, and finally shot himself. [MUSIC: Sonogram; “Fell Through Mirrors” (from Cubists)] As horrific as that was, as incomprehensibly sad, Steve Levitt, given everything he knows about crime, he wasn’t all that surprised. Steven LEVITT: You know, I think my reaction was probably different than other people’s reactions, because the thing that I’m always shocked by is how few insane people are out there doing mass murders, not how many are out there doing mass murders.

Black Panthers: Assassinated by the State - The Federally Sanctioned Murder of Fred Hampton " ... a much-needed corrective to a badly distorted mainstream narrative of a key event in the history of the left and African-American politics of the late ’60s ... It is now clear that Hampton and Clark were victims of a plot hatched by the FBI and executed by the Cook County State’s Attorney and Chicago police officers. Nonetheless, conventional wisdom portrays the Panthers as the villains. ... This book should alter the conventional wisdom that the Panthers were a dangerous threat that the police had to eliminate at all costs By Salim MuwakkilIn These Times | November 25, 2009 Street door to the Black Panthers’ headquarters after the October 1969 police raid It’s clear that Hoover’s designation of the Panthers as ‘the greatest threat to the internal security of the country’ provided law enforcement with a virtual license to kill. But Haas also offers captivating details that add color and context to those turbulent times. The first Panther office opened in Chicago in November 1968.

Bohemianism This use of the word bohemian first appeared in the English language in the nineteenth century[1] to describe the non-traditional lifestyles of marginalized and impoverished artists, writers, journalists, musicians, and actors in major European cities. Bohemians were associated with unorthodox or anti-establishment political or social viewpoints, which often were expressed through free love, frugality, and—in some cases—voluntary poverty. A wealthy and privileged, even aristocratic, bohemian circle is sometimes referred to as the haute bohème[2] ("high bohemians").[3] The term Bohemianism emerged in France in the early nineteenth century when artists and creators began to concentrate in the lower-rent, lower class, gypsy neighborhoods. Origins[edit] European bohemianism[edit] The term Bohemian has come to be very commonly accepted in our day as the description of a certain kind of literary gypsy, no matter in what language he speaks, or what city he inhabits .... People[edit] Europe Canada

A pro-liberty approach to lawmaking The candid truth is that a great many — if not most — existing laws and proposed pieces of legislation are incompatible with a free society. How can we know if a law promotes liberty or enhances the power of the state? What standard must a law meet to satisfy the freedom-oriented crowd? Indeed, advocates of a free society should be the last, most apprehensive individuals to convince that a new law is justified. With any piece of legislation, always begin with a default position of “no.” Police State USA has formulated a series of rigorous checks to help determine whether a proposal is compatible with the interests of a free society. To weed out the unnecessary, unsustainable, unconstitutional, unjust, unreadable laws, I propose that ALL of the following statements should be true of a proposal before a pro-liberty individual considers endorsing it: 1. A government must never be allowed to become lawless and without limitations. 2. Sacrificing liberty is always a mistake. 3. 4. 5. 6. 7. 8.