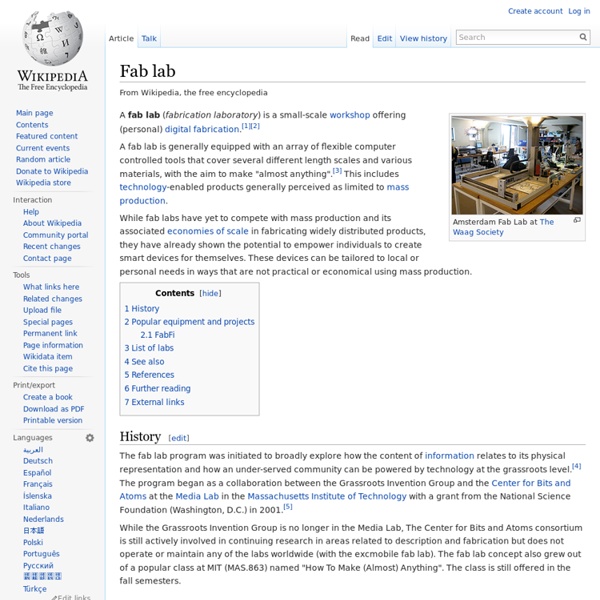 A fab lab (fabrication laboratory) is a small-scale workshop offering (personal) digital fabrication.[1][2] A fab lab is generally equipped with an array of flexible computer controlled tools that cover several different length scales and various materials, with the aim to make "almost anything".[3] This includes technology-enabled products generally perceived as limited to mass production. While fab labs have yet to compete with mass production and its associated economies of scale in fabricating widely distributed products, they have already shown the potential to empower individuals to create smart devices for themselves. These devices can be tailored to local or personal needs in ways that are not practical or economical using mass production. History[edit] Popular equipment and projects[edit] Flexible manufacturing equipment within a fab lab can include: FabFi[edit] List of labs[edit] MIT maintains a listing of all official Fab Labs, worldwide. See also[edit] References[edit]

Printed circuit board milling Milled Printed Circuit Board Printed circuit board milling (also: isolation milling) is the process of removing areas of copper from a sheet of printed circuit board material to recreate the pads, signal traces and structures according to patterns from a digital circuit board plan known as a layout file. Similar to the more common and well known chemical PCB etch process, the PCB milling process is subtractive: material is removed to create the electrical isolation and ground planes required. Advantages[edit] PCB milling has advantages for both prototyping and also for some specialist PCB designs. Prototyping can provide a fast-turnaround board production process without the need for wet processing. Some PCBs, requiring extensive drilling or profiling of the board outline are particularly suitable for production by milling. In mass production, milling is unlikely to replace etching although the use of CNC is already standard practice for drilling the boards. Hardware[edit] Tooling[edit]

FabLab South Africa Open Source Ecology Open Source Ecology: Practical post scarcity The 50 machines that compose the Global Village Construction Set Open Source Ecology (OSE) is a network of farmers, engineers, architects and supporters, whose main goal is the eventual manufacturing of the Global Village Construction Set (GVCS). As described by Open Source Ecology "the GVCS is an open technological platform that allows for the easy fabrication of the 50 different Industrial Machines that it takes to build a small civilization with modern comforts History[edit] Marcin Jakubowski Ph.D. founded the group in 2003.[7] In the final year of his doctoral thesis at the University of Wisconsin, he had the feeling that his career field was too closed off from the world's problems, and he wanted to go a different way. Open Source Ecology is also developing in Europe as OSE Europe.[9] Factor e Farm[edit] The Factor e Farm is the main headquarters, where the machines are prototyped and tested. Current progress[edit] Awards and recognition[edit]

www.siamect.com » Process control based on free resources … The solution to all evil… Proview, Arduino and other free software/hardware resources builds interesting concepts for future control systems. The range stretches from simple sequences in small machines to complex factory wide or even global processes. The star in this niche is a system called Proview.se While the name may not be familiar to most people, the system has proved itself in the Swedish steel manufacturing business for more than two decades. It is actively developed and maintained and has a very interesting and active forum. Arduino is a project aiming for easy prototyping of smaller electronic systems. My project is to provide an I/O module based on Arduino but designed to work in industrial environment with noise, dust etc. I will post my progress here…. Martin The tests I have carried out so far is with an Arduino Ethernet card arduino.cc/en/Main/ArduinoBoardEthernet I will try to focus on price reduction later on when I at least have a card that works. What is next? 1. 2. 3. 4.

Tekla Labs Wiki Type of website that visitors can edit A wiki ( WIK-ee) is an online hypertext publication collaboratively edited and managed by its own audience, using a web browser. A typical wiki contains multiple pages for the subjects or scope of the project, and could be either open to the public or limited to use within an organization for maintaining its internal knowledge base. Wikis are enabled by wiki software, otherwise known as wiki engines. The online encyclopedia project, Wikipedia, is the most popular wiki-based website, and is one of the most widely viewed sites in the world, having been ranked in the top twenty since 2007.[3] Wikipedia is not a single wiki but rather a collection of hundreds of wikis, with each one pertaining to a specific language. In addition to Wikipedia, there are hundreds of thousands of other wikis in use, both public and private, including wikis functioning as knowledge management resources, note-taking tools, community websites, and intranets. Characteristics

Fear Not By Andrew Silberman Model by Louise Rouse. Photography by Julio Shiiki. Last month an Ax reader suggested I write an article that deals with fear. What are you afraid of? Ask someone that question and depending on how you vocalize it, it can sound dismissive, disarming or way too private to discuss. Some commonly expressed fears were not getting one’s point across, keeping one’s job, the economy not bouncing back, another earthquake, competitors hiring away our talent, and dealing with one’s boss. Everyone’s afraid of the wrong thing All too often, communication issues, especially between boss and subordinate, spring from unspoken, unacknowledged and sometimes, as seen in the Johari Window exercise I’ll walk you through below, completely unknown fears. (It’s not for nothing that we call this newsletter the “Ax.” First, you might want to know what you fear. Peering Into the Johari Window The manager who rained down anger on the two subordinates is coming from one of those two quadrants.

FabLab@School FabLab@School is a growing network of educational digital fabrication labs that put cutting-edge technology for design and construction -- such as 3D printers and laser cutters -- into the hands of middle and high school students. TLTL researchers have spent the last years developing low-cost tools, a curriculum, and a rigorous teacher-preparation program. The labs are the proving ground for much of the research going on in TLTL. There are currently FL@S installations on the Stanford University campus, in Moscow (Russia), Bangkok (Thailand), and in Palo Alto, USA. Minimum hardware resources needed to assemble a FabLab@School are: 1. Here are two commonly used laser cutter models in the U.S. Epilog LaserThe TLTL uses the Epilog Helix 45-Watt laser cutter Full Spectrum Laser The TLTL also uses a Full Spectrum Laser 40-Watt laser cutter Universal Laser Systems Another option is the Universal line of cutters 2. The GoGo Board is a kid-friendly robotics platform designed for K6-K12 education. 3.

VOID - coffeemakescreative VOID is a conceptional processing magazine for the iPad. It is aimed to bring coding closer to designers, with focus on enhanced user integration and personalization with a strong visual approach. The magazine app features sections where the reader is able to explore projects, learn about other processing artists, manipulate source code live inside the app and immediately see the changes highlighted in the code. Users can save their modified versions of a sketch, screenshots or short videos to a custom dropbox folder that is linked to the app. It is also possible to share this data via facebook, twitter and email. Idea, Concept and App-Layout: Natalie Hanke Camera and Postproduction: Daniel Oliveira Carneiro Music: Pivot — Make Me Love You VOID App Cover VOID Particle Intro, blending into the cover Sign in with your existing dropbox account or create a new one VOID Table Of Contents Article Page "Continuum" and image gallery VOID table of contents and Portrait Page of Daniel Shiffman

Text of Creative Commons Attribution-ShareAlike 3.0 Unported License 1. Definitions "Adaptation" means a work based upon the Work, or upon the Work and other pre-existing works, such as a translation, adaptation, derivative work, arrangement of music or other alterations of a literary or artistic work, or phonogram or performance and includes cinematographic adaptations or any other form in which the Work may be recast, transformed, or adapted including in any form recognizably derived from the original, except that a work that constitutes a Collection will not be considered an Adaptation for the purpose of this License. For the avoidance of doubt, where the Work is a musical work, performance or phonogram, the synchronization of the Work in timed-relation with a moving image ("synching") will be considered an Adaptation for the purpose of this License." 2. Fair Dealing Rights 3. The above rights may be exercised in all media and formats whether now known or hereafter devised. 4. 5. 6. 7. 8.