30 Free Essays & Stories by David Foster Wallace on the Web 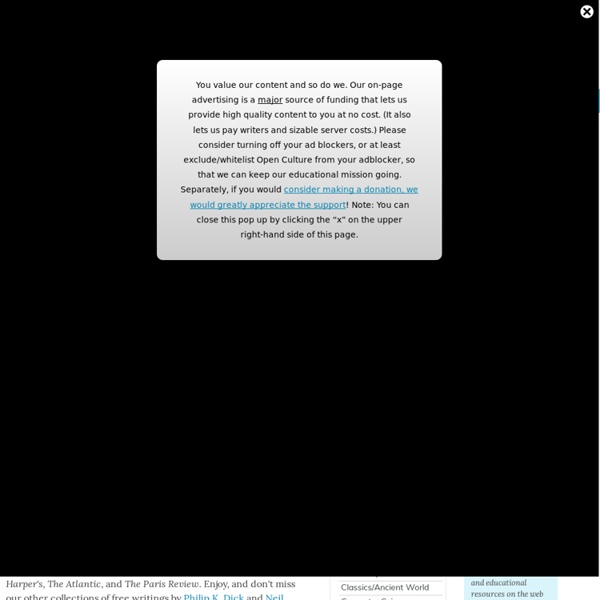 THE DAVID FOSTER WALLACE AUDIO PROJECT | Audio archive of interviews with, profiles of, readings by, and eulogies to David Foster Wallace. David Foster Wallace on Writing, Death, and Redemption by Maria Popova “You don’t have to think very hard to realize that our dread of both relationships and loneliness … has to do with angst about death, the recognition that I’m going to die, and die very much alone, and the rest of the world is going to go merrily on without me.” On May 21, 2005 David Foster Wallace took the podium at Kenyon College and delivered the now-legendary This Is Water, one of history’s greatest commencement addresses — his timeless meditation on the meaning of life and the grueling work required in order to stay awake to the world rather than enslaved by one’s own self-consuming intellect. Think of the old cliché about “the mind being an excellent servant but a terrible master.” Three years later, on September 12, 2008, Wallace murdered his own terrible master — not by firearms, but by hanging himself. This dark whimsy is what lends literature its mesmerism, and in it Wallace sees both redemption and remedy for our existential dance with anxiety: Donating = Loving

supposedly fun | david foster wallace Towards the beginning of E Unibus Pluram, Wallace makes the distinction between the observance of the fabricated and the observance of the authentic. On one end of the spectrum, Wallace derides television for its articificiality, its psuedovoyeurism that allows the masses to peer into a world behind the screen, unnoticed and uninterrupted. Wallace describes this one-way mirror, saying “television looks to be an absolute godsend for a human subspecies that loves to watch people but hates to be watched itself” (Wallace, p. 22). Among many others, one of Wallace’s main qualms with television is the sense of false intimacy it creates with the watcher. While the viewer feels as if they are witnessing the technicolor, private lives of the characters behind the glass, they are in fact viewing the creative whimsy of tv writers, the end product of mass-market demands. What’s more, the actors know that they are being viewed. Enter Wallace in “A Supposedly Fun Thing…”.

David Foster Wallace on Why You Should Use a Dictionary, How to Write a Great Opener, and the Measure of Good Writing By Maria Popova “Readers who want to become writers should read with a dictionary at hand,” Harvard psycholinguist Steven Pinker asserted in his indispensable guide to the art-science of beautiful writing, adding that writers who are “too lazy to crack open a dictionary” are “incurious about the logic and history of the English language” and doom themselves to having “a tin ear for its nuances of meaning and emphasis.” But the most ardent case for using a dictionary came more than a decade earlier from none other than David Foster Wallace. In late 1999, Wallace wrote a lengthy and laudatory profile of writer and dictionary-maker Bryan A. At one point, the conversation turns to the underappreciated usefulness of usage dictionaries. True to his singular brand of intellectual irreverence, Wallace offers a delightfully unusual usage of the usage dictionary: A usage dictionary is one of the great bathroom books of all time. Reading is a very strange thing.