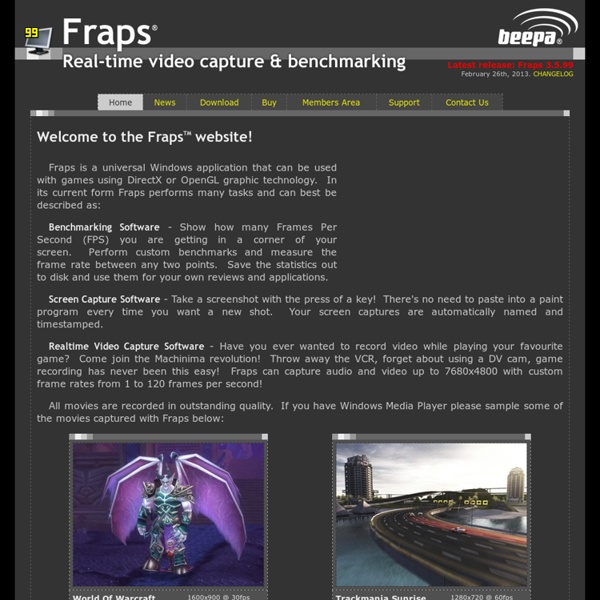 Fraps is a universal Windows application that can be used with games using DirectX or OpenGL graphic technology. In its current form Fraps performs many tasks and can best be described as: Benchmarking Software - Show how many Frames Per Second (FPS) you are getting in a corner of your screen. Perform custom benchmarks and measure the frame rate between any two points. Save the statistics out to disk and use them for your own reviews and applications. Screen Capture Software - Take a screenshot with the press of a key!

Dxtory - Features The Fastest Movie Capture Dxtory is a movie capture tool for DirectX and OpenGL Applications. Since data is directly acquired from a surface memory buffer, it is very high-speed and works with small load. Lossless Capture Screen Capture Software for Windows, Mac, and Chrome Context is everything. Recording a video lets the person on the other end actually hear your voice. So the next time a webpage, PDF, or video edit is sent to you for feedback, consider dropping the red pen and record a video instead. With Snagit, there’s no waiting. You can record your video, and share it within seconds.

Snapz Pro X I have used sooo many different screen capture softwares and I just have to tell you guys that you are the ONLY ones who dont slow down my computer while recording video. Sometimes I have to check that the program is still on because I dont even believe it could work that well. Thank you!!! Andrew Smith, Customer Wink - [Homepage] Here is a sample Flash tutorial created by Wink. Click the green arrow button to start viewing it. --------> amazon.co I use this monitor for gaming, Photoshop, Lightroom and browsing the internet. It does it all perfectly fine.This monitor comes factory calibrated, supports SST, 60Hz, and with 190ppi is unbelievably sharp. Reading text is just a pleasure. Once seen, you will never look back at 1080p or 1440p again. I know some people are afraid to be an early adaptor, but don't worry.

List of common misconceptions From Wikipedia, the free encyclopedia This incomplete list is not intended to be exhaustive. This list corrects erroneous beliefs that are currently widely held about notable topics. Free Software Overview Game Blocks is a free, open source library for making games. A purely visual programming toolkit, it was built with BYOB (Build Your Own Blocks) from UC Berkeley, which is built on top of Scratch. Scratch is developed by the Lifelong Kindergarten group at the MIT Media Lab.See

An Open Source Video Mixer, Inspired by DIY Space Exploration As many ponder the fate of hardware mixing, mixing in software continues to advance. And in a reminder of just how many different applications video mixing can have, here’s a fascinating article about a new open-source Linux-based video mixing tool called Snowmix: Copenhagen Suborbitals Release Snowmix, an Open Source Video Mixer [The Power Base] What’s fascinating about it is that this didn’t come from VJs or broadcasters, but people who are experimenting in DIY, non-profit human sub-orbital flight (the Copenhagen Suborbitals). There’s something really touching about watching them go from one video feed to another on rockets – perhaps that sense of romance of the heyday of NASA, of dreaming of Space Camp and astronauts. (Hey, not all video mixing has to be switching between layers of the kaleidoscope and the silhouetted dancing girls.

The Ultimate Hard Drive Test: What Hard Drive is Best? Over the past year we’ve been releasing hard drive reliability statistics based on the drives we use to store customer data for our online backup business. As of the end of Q1 2015 we had 44,252 hard drives spinning in our datacenter. If we subtract boot drives and drive models with less than 45 drives from that total, we get 42,749 hard drives remaining spread across 21 drive models.

Excellent 'Blade Runner' Art Show at Bottleneck Gallery in Brooklyn by Alex Billington June 1, 2014 "It's too bad she won't live, but then again who does?" There's a new art show that just opened in Brooklyn themed to Ridley Scott's seminal sci-fi classic Blade Runner, first in theaters in the summer of 1982, 32 years ago.